OSR/GLOG Wizardry- The Nuts and Bults

I plan on posting a write up of my OSR Wizard class later, and some of the sub-types right after.  But I want to quickly establish some of the base rules of Wizardry in my settings.

Spellcasting Dice, Spell Slots, Spells, and the Wizard himself. 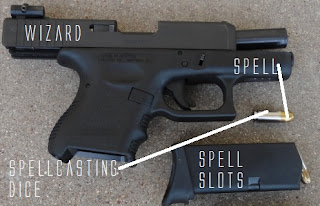 Spells are the weapons the Wizard uses.

Spell slots are where a Wizard puts a Spell after he prepares it.  Preparing a spell takes 1 Hour of concentration, but I usually just handwave this by asking the Wizard in the morning, "So, what spells do you prepare after breakfast?"

Spellcasting Dice are dice that the Wizard gets depending on their magic items or levels.  These are d6s that are used to power spells.  If the Wizard rolls a 5 or 6, the dice is expended, and won't return until after an eight hour rest.

All spells require spellcasting dice to cast.  But they do not have spell levels.  Instead, certain spells will give you more impressive results if cast at a higher level.  To cast something at a higher level, ou must reach a higher Threshold.  these Thresholds are a certain number, and if they aren't reached, the spell fails automatically.

Additionally, rolling a total of 1 on a Spellcasting Die means the spell automatically fizzles.

When a spell invokes Chaos, it causes an additional effect, but the spell still succeeds.  When Corruption is invoked, it automatically fails.

How to read an OSR Spell

Now, as with all spells based off the GLOG, they can look a little minimalist, but once I explain the terminology, you should be able to understand them like a pro.  There are only two real terms you need to know.  First, [dice] means "Insert the number of dice used to cast the spell here", and [sum] means "Insert the total sum of all spellcasting dice rolled here".  And just for inclusivity, here's the format all the spells are written in.

Putting it all together

And here's how a finished spell looks.