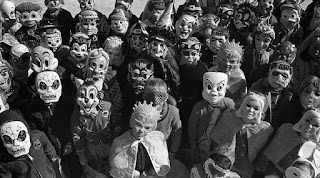 They are not hear to engage, they are here to be entertained.  They will begin following the most interesting group of people around, so this usually means the players.  But if they run into a group that looks more interesting, make a save.  On a success, they leave and follow that group instead.  They will fight to defend themselves, but if not molested, they will just persist in following you.

Spectators like:
- Fair fights
- Duels
- Tense, nail-biting encounters
- Twists of fate (whenever someone rolls a 1 or 20)
Spectators do not like:
- Killing prisoners or those who surrender
- Unfair fights
- Avoiding or sneaking around obstacles
- Being a poor sport

If they feel some situation could be improved by their involvement, they will do so by distributing divine power to anyone who they feel needs it.  Remember that the Spectators don't particularly care about who wins, just about seeing a cool situation.  They might use their powers to help the Players, or they may buff a valiant monster who refuses to flee.

For role-playing purposes, treat the Spectators like an amorphous blob of mostly interchangeable individuals.  They have no fear of death, these bodies are just temporary vessels.  But if you ever need a concrete number, roll 1d12+6.  In combat, all it takes is for one Spectator to be alive to use their powers.  Additionally, their powers disappear when they all die.

Finally, if you kill a whole group of Spectators, they make a save.  On a failure, they are gone.  On a success, they all appear mysteriously in the next room or open area.  They may attack again, or they may applaud you.

Hero's Mantle: Can only affect one person at a time.  When this ability is activated, the person it affects regains 1d6 HP and 1d6 FS, and there is something suitably dramatic, such as a puff of smoke or a flash of light, or a wall crumbles to admit the early morning sunlight, etc.

Unhelpful Hand: One attack that would have hit instead misses, and the person who would have taken damage is okay.  The Spectators can only do this once per round.

Crowd's Displeasure: One attack that would not have missed hits, and the person who would have successfully dodged takes damage as normal.  The Spectators can only do this once per round.

Curse of the Crowd: Can only affect one person at a time.  When this ability is activated, one person gets -4 to attack and damage, and whenever they take damage, the person who damaged them can roll twice and take the higher result.

Tactics:
- Don't fight unless attacked
- Root for the underdog or the most virtuous looking
- Reward fair play or heroism
- Punish viciousness or bad sportsmanship 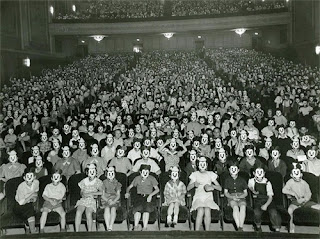