This is a post detailing the extended families of the Handsome Men, the Nukarian version of Elves.  In Nukaria, Handsome Men assemble large numbers of lesser creatures to serve and attend to their needs.  This is a post that details what exactly those creatures can be.

This post owes a substantial debt to Arnold K's Elven Warbands post.  Additionally, the Handsome Men share the mindset of K's Elves, which he detailed here.  Thanks for everything, Mr. Arnold. 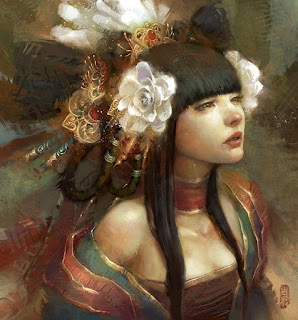 All Handsome Men have...

- 2 HD
- AC 12
- They can cast spells as a level 1d6 Magic-User, exploding on a 5 or 6
- They have a number of spells and spellcasting dice equal to their Wizard level
- They also possess the ability to transform: this is called 'putting on your War Face'

When a Handsome Man puts on his War Face...

- Have him or her roll as many spellcasting dice as he or she wishes
- These dice burn out as normal
- But the Handsome Man gains +[sum] HP
- A +[dice] bonus to AC
- An attack bonus of 2[dice] and a damage bonus of +[dice]
- And he or she can make a number of attacks equal to [dice]/2, rounding down to the nearest whole number

This Handsome Man spends most of his (or her) time doing... 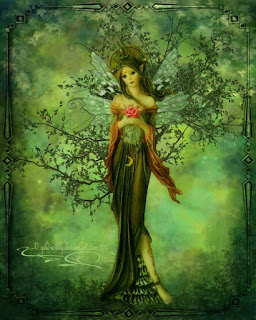 [Remember that the Handsome Men are just Folk who sold out, trading true freedom and savagery for shoes and bread.]

All Handsome Men households, regardless of size, have Elfmen, Little Brothers and at least 1 Special Servant.  Roll once on each table.  Also note that these tables ignore servants or other hired hands that might not be useful in a combat situation. I trust the Referee can handle that themselves.

1d6
1- Zijo [Zee-Joe].  Zijo is trained as Valet.  He's an expert of courtly sarcasm, etiquette and theatre.  He can also sing and play instruments fairly well, for a mortal.  His War Face is a skin-tight body suit covered in spiny quills.  He wields a glass sword and shield.  Zijo is a Level 1 Alice.
2- Pentatakin [Penta-ta-kin].  It's hard to always look your best.  The best dressed have the best help.  Pentatakin is the best dressed mortal in all of Handsome Man society.  He keeps his Master looking sharp, no matter the occasion.  His War Face is a coat of draping leather and armor of jet scales with glass lenses over his eyes and metal talons on his fingertips.  Pentatakin is a level 4 Magic-User, specifically a Handsome Wizard.  He knows the spells Bubblegum Fluff and Cut on the Dotted Line.
3- Junicho.  Junicho's primary duty is actually to supervise and help the gardeners, but his secondary duty is to work hard with his shirt off and impress the Little Sisters with his toned abs and perfect tan.  He excels at both tasks, only matched by his master in flower arranging and planting.  Junicho's War Face is covering himself in illusory paint that makes him look like he is horribly burned, naked and currently on fire.  He is a level 3 Magic-User, a Warlock.  He knows the spells Hellflame, Fireball and Sweet Georgia Brown.
4- Mixoma.  She's got a weird look to her, one no Fleshcarver has been able to cure.  It is recommended that you use her as a Masseuse, partially because that's what she's trained in, but also because then you won't have to look at her.  Mixoma is also a highly talented spy, skilled in eavesdropping, remembering things and breaking and entering.  Her War Face is removing the veil over her eyes and covering the rest of herself in dark blue cloth.  This makes her almost invisible at night. Mixoma is a Level 2 Deep One Hybrid.
5- Stellaine.  She's a tough old bird, cracked and withered.  She's going to need to be decommisioned soon.  Her Master just can't bear to do it.  He's waiting for the next chance he gets to put on his War Face.  Then he'll do the deed.  Until then, he lets her lead around his guests.  Stellaine's War Face is a dark jacket covered in rattling chains.  She is level 3 Agent with the Semblance [Chalk Lane].  This Semblance transforms dead flesh into explosives.
6- Ephine.  He's a butler.  He supervises other students quite well and takes orders with the same level of proficiency.  He organizes parties, cleans faster than ten men and has the work ethic of 20.  His War Face is a that he removes his jacket, rolls up his sleeves, and soaks himself in blood.  He is a level 3 Agent with the Semblance [The Lost Children].  This Semblance causes those who commit evil actions in his presence to develop targets on their flesh.  If one of these targets is struck, that person suffers grievous harm, as long as the blow is harder than flicking someone in the forehead.


Little Brothers and Sisters skilled in dancing, or serenading the wind.

1d8
1- 1d20 free Frogfolk (1 HD) armed with giant cutlery and wearing sauce pans and giant thimbles on their heads.  Look like something out of a whimsical storybook.  However, don't let it fool you.  The cutlery functions as effective polearms.  Even the giant spoon is sharp.  Tactic: To form a wall or block and slowly advance on anyone they need to hurt, using their polearms to keep you at range.
2- 1d10 Morcai Spearmen (1 HD) armed with spears and wearing pristine white garb with pleasing masks that resemble death masks, but less morbid.  These masks also help them channel their venom over longer distances.  Tactic: Charge in a disorganized mob.  Spray venom on anyone who doesn't die.
3- 1d12 Goatling Archers (1 HD) dressed in business suits with braided beards and groomed mustaches.  Also, silly little hats. Tactic: Fire arrows then run away.  Attack from range then flee.
4- 1d4+4 Jelly-Eyed Calvarymen.  They ride either well-trained horses or giant newts.  They wear big hats and colorful ponchos, along with shiny belt-buckles.  Tactic: Lasso you then drag you behind their horses for a while or just ride you down.
5- 1d8 Lizarian Blade-Grapplers (1 HD).  The Lizarians wear loose white robes with head bands and colorful belts.  They seem unarmed and bow before combat.  This is a trick; Lizarians aren't honorable.  Tactic: grapple one person and once he or she is pinned, everyone else runs up and stabs him or her with their hidden daggers.
6- 1d6+2 Morcai Huntresses (1 HD) armed with nets and spears.  These are female Morcai, as evidenced by their costumes, colorful sundresses, wigs to cover their bald heads and sun hats.  Some even go a step further and paint their skin a different color so from a distance with their face turned away, they look almost like Elfmen.  Tactic: Throw nets over people to bring them down, then spit venom in their faces.  Then stab anyone who tries to get close to the person trapped in the net.  Stab them if they try to escape.
7- 1d6+2 Oxmen Brutes (2 HD) wielding giant hammers and axes.  The Oxmen wear flower wreaths and false horns that are painted in jolly colors such as robin's egg blue, sunshine yellow, or fire engine red.  The Oxmen cut off their real horns for safety.  The false horns break off if you try to grab them.  Tactic: Form a solid wedge and divide your enemies from each other, then crush the weaker half.
8- 1d6+1 Crocoling Samurai-Poets (2 HD) who compose haikus when not fighting.  The Crocolings wear bamboo hats with lace draperies to conceal their faces and cover their scaly bodies in colorful silks, usually displaying pleasing patterns or comforting designs, such as flowers, clouds, cute animals, etc.  Tactic: To fire a way of arrows from their bows then move in and fight you one-on-one.

1d8
1- 1d4+1 Sinister Folk.
2- 1d6 Puttos.  Puttos are lesser Outsiders who like to watch/make people fall in love.  Unfortunately, they don't really get mortals, so most people who end up getting matched by the Putto end up breaking it off after a couple of days, maybe a week later after they realize that it's simply not going to work out.  Puttos can shoot arrows that make you fall in love with the first thing you see.  They can also choose the type of love, whether it be Agape, Philia, Storge or Eros.  They can also shift the type of love you feel for someone, such as making a man's Eros for his wife become Agape or a woman's philia for her favored horse become Eros.  They usually do this as a cruel prank, which their Handsome Master always pretends to disapprove of.
3- Wicker Man.  Wicker Men are large, elaborate creations of many thousands of wooden sticks bound together into the shape of a great man.  The Handsome Men then decorate them with dangling wind chimes, ribbons and flowers.  Then, after a certain length of time, the Handsome Men set them alight.  What most people don't know is that the Wicker Men can move and aren't immediately consumed by flames.
4- A Jungle-King.  Jungle-Kings are the creation of a male lion, a female tiger and some very bored Handsome Men.  They are eleven feet long and can fit a whole human head inside its open mouth with room to spare.
5- A Phantasmal Interloper.  They are always tied to some kind of object, such as a cursed knife or a sacred pool.  Doing something specific and appropriate to the enchanted object, such as drinking from a sacred pool without permission or cutting yourself on a cursed knife will summon the Phantasmal Interloper.  It will take the form of a monster that will pursue you.  The monster is only real to those who believe it is.  Its specific powers will vary, but one thing they all have is that if killed it will return to life and continue the pursuit until you either do something specific to it or the enchanted object, such as purifying the cursed knife or offering an appropriate sacrifice to the Spirit of the Sacred Pool.
6- A Glomper.  Ten feet tall and covered in plush fur, with iron muscles underneath.  Usually used to recapture particularly unruly slaves.  Can paralyze with its button-eyed stare and trap people inside the hollow in its chest.
7- A Mist-Breather.  A giant, levitating humanoid head with alien eyes and soft, plump lips.  Has teeth the size of tombstones and long, dangling tentacles.  Can also produce fog and clouds of mist.
8- A Malkim.  A giant rabbit-man wearing a three-piece suit and a monocle.  His voice is impossibly soft.  Listening to him talk makes you start bleeding from every orifice, starting at the ear, before moving onto the nose, eyes then everywhere else.  This rapidly leads to severe blood loss, followed by death.  He is timid, polite and always apologetic for the harm he is causing. 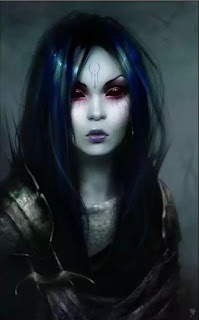 from cravagolina_wordpress
By Yami Bakura at May 03, 2019