SOS: The Powers of the Emptiness 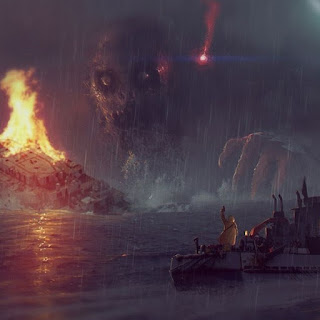 All magic that does not come from rituals comes from the Powers, which are vast entities who dwell within the Emptiness and seek to manipulate the physical world to their benefit.  These entities vary wildly in character and nature, some seem to almost possess a "Will" of sorts, while others seem utterly removed from anything resembling thought or motivation, acting in ways nigh-imperceptible or seemingly aimless.  The connection between the Powers and the Hollow Kings is debatable.  The Hollow Kings, claim to be the most powerful beings in the Emptiness, if not the entire universe, but even they pale in the face of the Powers.  Is this mere bluster?  Are the Kings themselves mere masks for the Powers, personal faces that allow them to act directly?  Or is the relationship between the Kings and the Powers something even stranger?

Regardless, all the Powers share a particular motif and method of operation.  They all have unique and contradictory goals, so they war against each other.  Their goals can be known, though they rarely are, as these goals are based on the logic of creatures too far removed to be truly comprehended by us.  Additionally, even if we could understand them, most of these creatures don't have the desire to tell us, or know that us knowing the truth would be counter-productive, so they keep their silence.  The only things we can truly know about the Powers is what they choose to reveal to their followers, who usually only know of their Master's motivations and current will.  To borrow an example from the Christian religion, God's motivation is Love.  He loves you and wants to be with you.  His will is that you believe in and act like his Son, the Lord Jesus Christ, as much as you are able.

Still, we can determine something about the Powers based on how they operate and what they appear to be.  To determine these things, roll on the tables below.  For one particular organization, roll only once, but for a longer game, roll several times, then determine the Powers' relations with each other.

This Power's existence is first hinted at through...
1d4
1- An Agent of the Power that seems to possess strange powers or cause strange things to happen around them.  Examples: a man who causes electrical devices to act oddly when he is around or a woman whose boyfriends tend to fly off the deep end and go insane or kill themselves.
2- A victim of one of the Power's Agents or Principals.  Examples: a woman who ended up lost in an impossible location or a savage murder committed through impossible means, such as a man being attacked by a tiger in your loft apartment, while his wife rocked their 3 month old to sleep in the other room, neither of them hearing a sound.
3- An artifact either created by or otherwise important to the Power's Principals or Agents.  Examples: A book associated with the Power's motif that causes strange dreams and gives you headaches when you try to read it for too long or a recording of an important person seemingly being tortured, despite the fact that this person is still alive and seems fine.
4- A strange occurrence caused by sources unknown to the players, but caused by the Power.  Examples: At a dance club, there is a gunfight and many people are injured, with several killed.  The police are never called.  Or, the witness to some mysterious event disappears or dies in a way related to that Power's motif, such as stepping into a puddle and vanishing without a trace or disappearing in the night, to be replaced by a person who looks nothing like them, but everyone treats as if it were the original person. 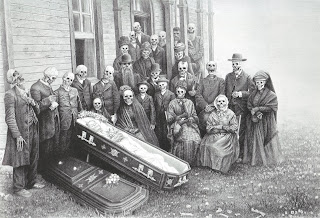 All of the Powers have Agents.  They are the servants, the Foot-soldiers, the congregation.  They enact its will in the mortal world and advance its plans.  Some of these Agents are unwitting, they do not know that they serve the Power at all, or they do not know the true extent.  They may think that they serve a secret society or a criminal syndicate gang but nothing more, being themselves unaware of the truth.  Alternatively, they may know much, and revere the Power itself as a God.

To see how the Agents of this Power act, roll on the tables below:

The Agents of this Power...
1d4
1- Do not for a second suspect that they are actually in the service of a Power from beyond their Universe.
2- Do think there is something weird going on, but they have only half-glimpsed shapes, suspicious conversations they overheard the management having and that one wing that no one is allowed to enter as evidence.  They have no idea, but they definitely suspect that some of the scenery is made of cardboard.
3- Do think that something dark is occuring here, but most don't think it is supernatural.  They suspect corruption, favoritism, nepotism, vice, sin and/or criminal activity.  They may be right, but they're definitely missing most of the pieces.
4- Know exactly what they've gotten into, or at least, most of it.  They do not know the Power's plans or true character, but they do know a lot.  They know their Master's will and they know something odd is occurring.

Some of the Powers also empower their Agents, endowing them with special traits, abilities or quirks.  So, how are the Agents of this Power blessed?

1d6
1- The Agents of this Power are not blessed at all.  They have been duped, fooled into serving a Power that cares nothing for them.  They are ordinary and the Power uses them for cannon fodder and meat.  The Power itself acts totally through its Principalities.
2- The Agents of this Power are robbed of their humanity and made into part of vast collectives.  The Agents are made a part of the Principalities, which are a part of the Power itself.  There is no individuality, no division, at least in the minds of the Agents, Principalities and most likely, the Power.
3- The Agents of this Power are blessed with certain natural virtues, such as wealth or goodliness, but otherwise are ordinary.
4- The Agents of this Power are given small protections, such as the bodies of their victims burning to a crisp to destroy physical evidence, fortune seeming to always favor the Agent or the Agent being subtly alerted to each other's actions and being given advice on how to protect each other in small ways: covering up incidents, manufacturing or destroying evidence, coming to act as reinforcements, etc.
5- The Agents of this Power have magical abilities, but they are subtle and relatively weak.  The Agents can influence the wills of others, endure things that an ordinary man would not survive, send messages across impossible distances or do something similar.
6- The Agents of this Power have either a small protection or a weak magical ability, equal chance of either.  The Power also has a method that it grants them of transcending their humanity and surpassing it.  Agents that transcend their humanity still look human, on the outside, but they have been granted amazing powers in exchange for their humanity.  For example, the Agents of this Power before their transformation can sense people are looking at them or cannot be seen on video cameras, have their picture taken or be recorded, but only one of those.  An Agent after his transformation would possess both abilities, as well as the ability to teleport when no one is looking at him to any place within 100', as long as no one is observing that location at the time. 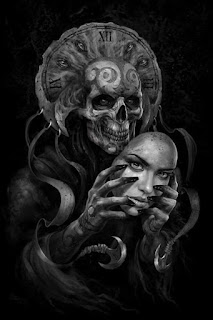 If the Agents are the servants, then the Principalities are the knights, the governors, the human face attached to something alien and unknowable.

Originally, I intended for these guys to basically be Outsiders, but now I am not so sure.  I want the supernatural to be something as wondrous and spectacular as possible in Sea of Stars, so I am redoing the Empty-Men, making most of them Principalities.

Statistically, these guys are Outsiders, as described in this post.  But they need a make-over.

For starters, I will not be stating where the Host ends and the Power begins.  The line is gray.  Is this a monster wearing human skin, or a person with incredible abilities?  And even if it was a human originally, how human is it now?  The Power, it changed them, making them more like it.  It's like, the Power is using the human, and not the other way around.  The Principalities will still possess their dual forms, but one form will always be that of a mostly normal human, though some of the Principalities will have small tells, such as a persistent scar, an odd number of fingers, or maybe just something about them is uncanny- they just don't quite the nuance of humanity.  Their true forms will be, of course, terrifying, alien and rarely seen.

Secondly, fighting these guys should be like staring in your own personal horror movie.  The Principalities are relentless and vaguely supernatural.  They seem to vanish when you stop looking at them, they display incredible physical prowess and no matter what you throw at them, they just refuse to die.

The Principalities do possess supernatural abilities, but I will be refluffing these abilities to be subtler.  Shooting lasers out of your eyes or breathing fire is not something I want for Sea of Stars.  It's too, overblown.  I want to preserve the mystique of the supernatural, so none of that will be permitted here.  That can be saved for the ludicrous high fantasy of Nukaria or some kind of OSR superhero hack. 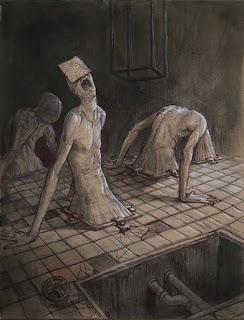 Email ThisBlogThis!Share to TwitterShare to FacebookShare to Pinterest
Labels: Adventuring in the future, random tables