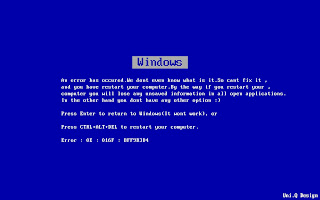 1d20
1) A rip in the fabric of the universe, you go to a random plane.
2) A rip in the fabric of the universe, you go to the astral plane.
3) The location you are in is attacked by a kill-team of Celestial Arbiters, with Angelic back-up.  They demand you submit or die.  "We have the place surrounded, come out with your hands up!"
4) Time stops for everyone but the person(s) responsible.  A Law God appears and berates the person for creating such a mess. The God then smacks the person upside the head and teleports the person(s) responsible to a suitably unpleasant location.
5) Time distorts around the source of the disruption for 1d6*10'.  This area is then trapped in a time bubble that lasts for 1d6 minutes.  Outside the bubble, time passes at an accelerated rate.  When you leave the bubble, you find that 1d4 [1= Minutes have become hours; 2= Minutes have become days; 3= Minutes have become weeks; 4= Minutes have become years.]
6) A portal opens under your feet and you fall through it.  The portal remains open for 1 minute, then closes forever.  Anyone who goes through the portal ends up in a random high level dungeon on that plane of existence.
7) You all jump to another one of your Referee's campaign universes.  For example, in one of my games, you end up in 1d4 [1= Sea of Stars; 2= Eldritch Americana; 3= Nukaria; 4= Those who Know.]
8) You jump universes.  The universe you end up in is almost exactly like your own, except 1d6 [1= All stereotypes about males and females are reversed (the culture also changes to fit these stereotypes); 2= All Gods are horrible, Lovecraftian things.  No one else finds this weird; 3= You are 1d100+10 years in the future/past (50% chance of either); 4= Magic is the opposite of what it was in your universe.  Eg, if it drove people insane and corrupted everything, it now does the opposite and vice versa; 5= This world was devastated by some sort of horrible disaster, the equivalent of global thermonuclear war or something on that scale; 6= This universe is almost exactly the same as yours, except you are a wanted felon.]
9) You get de-magictized. Everything you own now isn't magic.  All Wizards or people with spell-casting or magical abilities that are not given to them by a Deity (ie not Paladins or Prophets) must save or lose their spellcasting abilities.
10) A clown jumps out and smacks you with a fish. Clown HD 1 AC 12 Fish 1d6 mor 12
11) 1d20 Horrible extradimensional beasts show up.
12) A bolt of searing plasma shoots into the sky and explodes, shedding light equivalent to the Moon that is visible for 1d8 hours and being visible in space.  1d6 weeks from now, your world will make contact with a technologically superior alien race.  Hopefully they're friendly.
13) The Earth shakes and the sky cracks.  For the next 1d6 days, roll on the Weird Weather Table.
14) All the dead within 100' of the breach whose souls have not departed for the Netherworld are dragged back into their bodies, restored to full HP and gain 1d4 mutations.
15) A doorway to Sheol opens.  The souls of the dead begin pouring out and animating any nearby corpses or possessing the bodies of those too weak to resist.  These Undead then immediately begin going on a rampage, the ones possessing the living engaging in all the vices of life, the ones in corpses trying to destroy everything in their path.
16) Everyone within 100' must save.  Those that fail their save switch bodies with another person who failed his save.
17) Reality crashes and has to be rebooted.  Everyone within 100' of the breach must save.  Those who fail their saving throw fall unconscious and lose their memories of the last 1d10 minutes.  Those who pass their save remain conscious, but if they look at what is occurring before them, they go permanently insane, having glimpsed the impossible intricacies of the cosmos.
18) The person(s) most responsible for the breach should reroll all Attributes immediately and save vs mutation.
19) Subtract two from all your attributes and randomly give them to your fellow companions.
20) You get a "I meddled in the business of Gods" tattoed in glowing letters on your body.  Roll 1d6 to see where it ends up. -6 charisma as well.
1d6
1- Left Arm
2- Right Arm
3- Left Leg
4- Right Leg
5- Body
6- Head 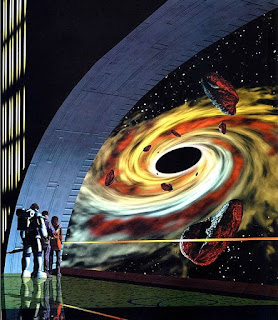