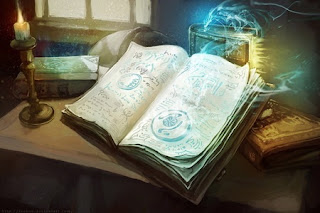 There are books you can read that cause things great, terrible or mundane to occur when you read them.  They do not detect as magical and function as ordinary books, otherwise.

Here are some basic rules for the books.

1.  The books do not detect as magical and function as ordinary books unless otherwise stated.

2.  Reading one of these books during combat requires an action, unless it says otherwise.

1d6
1- The Book of the Damned.  A massive tome bound in leather with a cover that resembles a woodcut, depicting a gruesome scene of torture.  A heretical Christian work, the Book of the Damned describes various visions of Hell from the Black Saint, Erasmus the Violate.  Those who read this book will find wounds opening on their bodies even as knowledge secret, blasphemous and forbidden fills their minds.  Anyone who reads this book takes 1d6 damage as [1= Fine cuts open on his arm; Marks from whipping tear up his back; 3= Long needles are shoved into sensitive areas; 4= Brands appear on the midsection or back; 5= A finger or toenail vanishes as if torn away by an invisible hand; 6= A bruise appears, along with the sharp pain of being struck.]  This person may then ask the Referee a question, which the Referee will answer 1d4 [1= With a lie; 2= By refusing to answer; 3= Truthfully, but as tersely as possible; 4= Truthfully, but with elaboration and 1d6 follow-up questions allowed.]  If the book is destroyed through any means other than fire, 1d20+10 Spirits of the Damned will be unleashed upon the world, to possess the living and the dead, to spread mischief and to wage war against all the forces of Goodness, Truth and Beauty.

2- The Beautician's Manual.  A dense book full of diagrams, with a hard cover of pink and white.  It is a textbook that describes the process of changing one's appearance and by thoroughly consulting it, it will allow the person who studies it to mold the flesh of living people like clay, able to change their features down to the bone structure of their face.  It will grant this power only to one person at a time, however.  The person who is granted this ability will also be cursed with certain dark appetites that will grow within them the more they use their ability.  Ceasing to use the book and the associated ability will stop the growth of these desires.  For each person, the curse is always dark and sadistic, usually designed to make the person into a hypocrite.  If you, the Referee, don't have any better ideas, roll on the table below.  The book curses the user with 1d6 [1= Insatiable sexual appetite; 2= Sadism; 3= Cannibalistic urges; 4= Kleptomania; 5= Megalomania; 6= Messiah Complex.]  If this book is destroyed through any means by a handsome, beautiful or wicked person, that person becomes cursed with misfortune.  If the book is destroyed through any means by a righteous person, they are cursed with wicked desires as per the user of the book's power, but the book will not reappear for 1d20 years.

3- Night's Herald.  A small primer with a jet black cover, only broken by the stylized white image of a hand reaching toward the string hanging from an activated light.  This book contains the ancient scriptures and teachings of a religious Cult that was destroyed after they engaged in a stand-off with the authorities, then committed mass suicide as the same authorities breached the compound.  By reading this book, the reader can cause any light source to turn off, either by switching off normally, or failing and being destroyed, such as through a power surge or a malfunction.  The reader can also temporarily blind someone by reading from the book, if that person is visible to the reader.  But, there is a problem that the reader will discover upon flipping through this tome that sometimes, when Darkness is invited in, it brings a few friends along.  Each time a group of creatures, formerly illuminated, are cast into complete Darkness by this book, there is a 1d10% chance equal to the HD of the strongest creature that a terrible monster appears and savages anyone nearby.  This monster carries darkness with it, which overwhelms most non-magical sources of light.  It can be banished by magical, or immense amounts of non-magical, light.

4- Fists of Steel, Jaw of Glass: A Gentleman's Guide to Self-Defense.  A hardcover book with a cover depicting a ruffian grappling with a gentleman in elaborate clothing.  This book describes martial techniques as a self-help guide for someone who knows nothing about fighting but wants to learn.  Anyone who reads this book can designate one person at the start of each round.  That person may, if they make an attack, reroll his 1d20 and damage dice, if his attack is 1d6 [1= A melee attack; 2= A ranged attack; 3= Made with bare hands; 4= Made with a sword; 5= Made with an improvised weapon; 6= Stylish and cool (Referee's Discretion).]  However, if the person designated chooses to make any other form of attack, they must reroll and choose the worse option.

5- The Lies of Multi-Culturalism: The Pack Instinct and the Depravity of Man.  A solemn paperback that details in excruciating, depressing detail the vast number of conflicts, local and far-flung, large and minor, known and secret, that have occurred between humans over differences of race, sex, culture, religion or any other perceived or imagined difference.  By reading from this tome, if there are members of two different groups within visual or perceivable range (the reader can hear them, for example), tensions will immediately flare between these two groups.  The longer you read, the faster tensions will rise and the more explosive the situation will become.  A few sentences will get a wary look, a page will get insults or taunts, a handful of sentences might result in a fight, a chapter might result in a riot.  The only side effect of reading this book is that once unleashed, the violence moves at its own pace and with its own energy.  You might have unleashed the riot, but you are not its master.  You also might be caught up in it yourself, so exercise caution.

6- Post-Industrial Capitalism and the Coming Loss of Labor.  A glossy hardcover that describes how the coming technological revolution will lead to the mass disenfranchisement of workers, particularly those who lack the necessary intelligence to be retrained into a new economy.  The smart will be spared, the book asserts, but only until their jobs are automated as well. The book is a tale both disturbingly realistic and occasionally hysterical, particularly when you reach the author's offered solutions.  Anyone who reads from this tome if they touch a machine, can cause it to break.  The Referee should roll a save for that machine based on how complex it is.  The more complex, the lower the bar.  For example, a computer might have a save of "5 or less is a success", while a '53 Chevy truck might have a save of "14 or less is a success".  If the machine fails its save, it breaks. Depending on the sturdiness of the design, it might be repairable.  That Chevy truck could probably be repaired, but the laptop you just glared at is almost certainly unfixable, especially given that it is smoking.  But when you read this tome, all other machines within 10*[X; where X is the number of the saving throw]' must also save.  Roll saving throws for all the machines until something malfunctions or breaks. 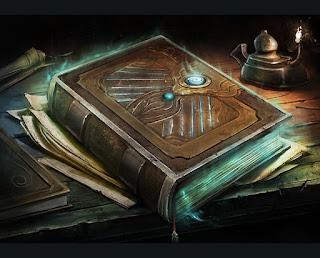