Author's Note: After some play-testing, I have found these rules to be a bit too powerful.  As such, I have edited this post and reduced the amount of Armor points across the whole post by 2.  So for example, Light Armor used to protect from 8 to 12 now offers protection from 6 to 10.  Otherwise, all is unchanged.

So there were some problems with my earlier armor rules.  Firstly, they were too complicated and the version I used in my actual games didn't match what I wrote in that post.  Additionally, armor was too effective.  Players who rolled well could skate by with basic armor and never take real damage.  And if the enemies had armor too it was totally boring, like watching two indestructible fighters pound away at each other, exchanging titanic blows that totally failed to scratch either one of them.

As such, I am rewriting them. 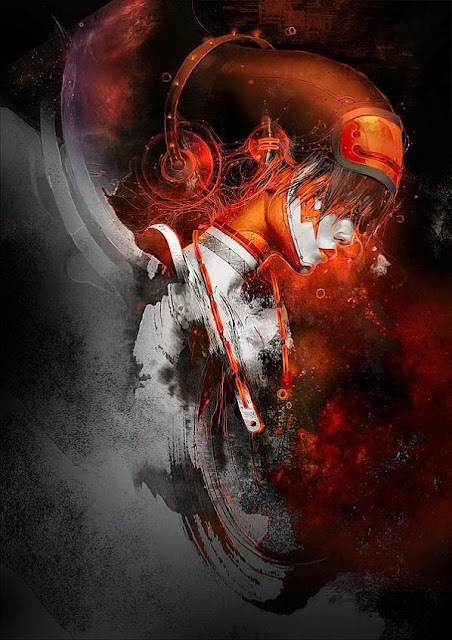 Armor now provides a flat bonus to Fighting Spirit.  For example, if you are Scoundrel you receive only +1 FS per level.  So a level 3 Scoundrel only has 3 FS.  But if that same Scoundrel were to wear Armor, say Light Fish Leather, he would have 11 FS.

Thus, in the fiction, if a player's armor could protect him from an attack, I would describe the attack as damaging the armor.  For example, if he was wearing a bulletproof vest and was shot, I would describe the impact as being cushioned by his vest.  If however, the attack was some form of damage that a bulletproof vest could not protect against, I would just describe him as dodging out of the way.  This is, of course, assuming it only damaged his Fighting Spirit.

I will also be including the tag [Ignore Armor] that can be added to certain weapons and abilities that bypass armor entirely.  Certain types of damage such as Force and Psychic automatically bypass Armor, but for others it is more situational.

For example, metal armor will not offer any real protection against Fire damage, so for it, Fire ignores armor.  But if someone is using cold damage that hurls icicles at you, that same metal armor will protect you.

Since players in my games are getting into conflicts on a semi-regular basis, I have decided that I will be imposing two rules on Armor.

Firstly, in a fight, if someone's armor is reduced to 0, then it can no longer protect them and damage from that point goes down to that creature's FS or HP, depending on how badly they are injured.

Secondly, unless damaged by some special form of damage, such as fire, acid or something else the Referee feels particularly appropriate, armor is not destroyed when reduced to 0.  Rather, it just needs to be repaired and it will function as normal.  Light Armor can be repaired with basic equipment in 1d6-X hours, where X is the skill of the tailor.  All Adventurers know how to do this, and subtract their COG modifier from the 1d6 roll.  Also note that repairing light armor takes a minimum of 1 hour.

Thirdly, Medium or Heavy armor cannot be repaired with rope, twine or a sewing needle and thread, but requires advanced knowledge and equipment.  This will usually mean returning to civilization or finding a smith in the area to repair it. 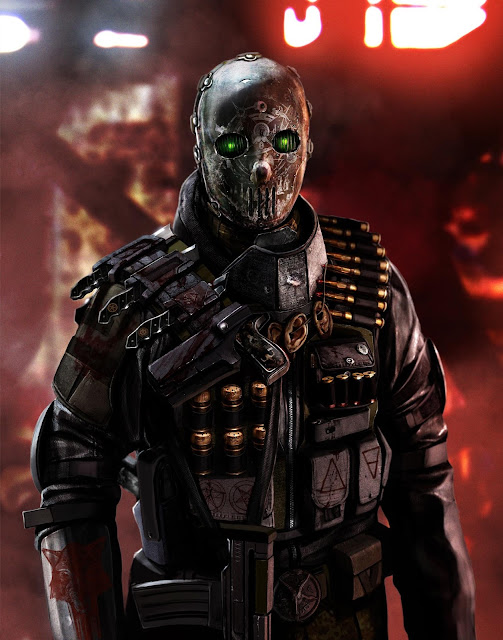 Light armor has 6 to 10 HP, depending on quality.
It takes up 3 inventory slots.

Medium Armor has 14 to 18 HP, depending on quality.
It takes up 6 inventory slots.

Heavy Armor has 22 to 26 HP, depending on quality.
It takes up 8 inventory slots.

Shields, depending on size, add +2 to +4.  They also provide advantages when confronted with certain types of saving throws.
A shield takes up 1 Inventory Slot.

Helms add +2 and give advantage on saves against being knocked unconscious.
A Helm takes up 1 Inventory Slot.

Depending on the type of armor, it may offer certain advantages or disadvantages.  For example, wearing chain means you will receive a penalty to stealth.  Plate or lots of metal might mean a penalty to initiative rolls as well.

Chain Shirt: Light Armor.  Concealable under a coat or tunic.

Chain Tabbard: Medium Armor.  Like the shirt, but protects much more.

Breastplate: Paired with greaves and arm-guards and you can be heavy infantry.

Plate: Since my setting is Iron Age, full plate is likely to be something found in pre-Deluvian ruins or in the realms of beings that are much more advanced in terms of technology, sorcery or both.

All these armors protect against sharp and bludgeoning, but not much else.

Warded Armor: Armor can be warded.  This offers the wearer protection against certain effects, depending on the wards.  For instance, being possessed, charmed or frightened.  It can also render someone impervious to illusions as long as they wear the armor.

Enchanted or Magic Armor: Armor imbued with magic can offer protection against one particular element or groups of elements. For example, the Armor of the Ice-Climber might give its wearer resistance to cold and falling damage as well as making it impossible for him to suffer from snow blindness or disorientation on a mountain or in snowy/blizard conditions.

Bulletproof Vest: Protects against bullets.  Comes in a variety of thicknesses, with the higher numbers weighing more and providing more protection.

Vest with Ceramic Plate: Nothing short of a high-powered rifle at point-blank range is getting through this vest.

- Diffusion.  Light/Medium/ Heavy.  Designed to be used as body armor for soldiers primarily fighting enemies equipped with laser weapons.  Come in thin, flexible vests, overcoats that can be placed over ceremonial armor, or entire suits covered in diffusion tiles and grounding lines.  They work by absorbing heat and channeling energy away from the body.  Very effective, but if they get overloaded they crack or even melt.

- Ceramic.  Light/Medium/Heavy.  A layer of interlocking plates that crack and fracture under pressure to stop bullets.  Come in Vests with variable amounts of concealability or in full suits that can cover one from head to toe.

- Cushioning.  Light.  Not actual armor, this is safety gear designed to protect contractors and laborers working in areas where falls and falling debris are common dangers.

- Liquiplate or L-plate.  Light/Medium.  Armor made of pockets of smart liquid that compresses and becomes rigid when struck.  When the force is dissipated, the liquid returns to its usual state.  Very expensive but quite effective.

- Powered Armor.  Heavy.  Rare and expensive.  Take an exoskeleton and cover it in plates of ultra-hard, light metal.  Not only does it protect the wearer but it increases strength and speed, and can be covered in all sorts of dangerous bells and whistles.  If someone in powered armor is coming after you and you don't have your own suit, now is the time to start running.  The only problems with them is that they're loud, hard to transport or repair and that they consume energy at a furious pace.  Most can only go about 10 to 30 minutes before needing a recharge.

- Personal Energy Screens or "PEAs".  These are extremely rare and very expensive.  An energy screen is a device that creates a magnetic field around the person wearing one, channeling ionized radiation, lasers or plasma away from the target.  Cannot stop physical projectiles or objects.  Can also be overloaded by too much energy.

- Personal Shield Device.  These are the cream of the crop, the highest echelon of defense.  These babies distort space around the wearer to laugh in the face of most attacks.  Physical rounds miss, lasers burn up too much energy or never reach you and physical weapons bend like balloon animals before your eyes.  The only real dangers while wearing one of these are other powered weapons, which can penetrate a shield because of their own one and plasma weapons, which don't need to penetrate your shield to cook you alive by heating the air around you to the same temperature as the surface of the sun.  Also, try not to run out of power in the middle of a fire fight.  That would be extremely bad. 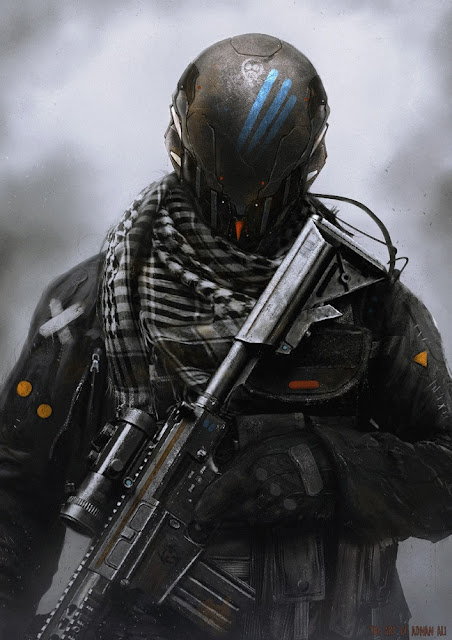 What kind of armor does this enemy wear?

If the answer is none, does the enemy have any form of natural armor?

A Dragon can have natural heavy armor, but an Ogre shouldn't, unless it is the Ogre King of Gorehollow.

If the creature has natural armor, what form does it take?

1d4
1- The enemy is covered in scales, thick fat or fur or something else that protects his body.
2- The enemy has used magic to harden its flesh till it is hard as wood, stone or steel, making them much harder to hurt.
3- The enemy is exceptionally fast or agile, making them difficult to hit.
4- The enemy is ensorcelled so that near hits are transformed into misses and direct strikes are blunted.  Neutralizing or circumventing this effect would make your attacks [Ignore Armor].

If the enemy wears Light armor, what quality is it?

If the enemy wears Medium armor, what quality is it?

If the enemy wears Heavy armor, what quality is it? 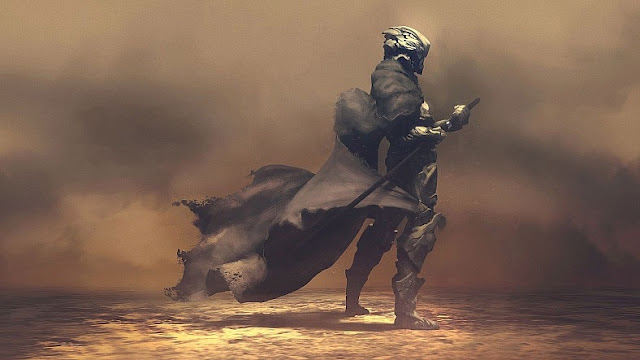