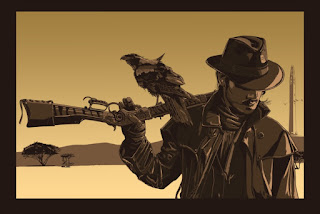 "Control the things you can control, you maggot.  Let everything else take a flying fuck at you, and if you must go down, go down with your guns blazing."

- Cort, The Drawing of the Three

The Servants of Lady Lead:

You are a master of the gun- a marksman who has combined his reverence for the weapon system and his skill with using it with the ancient arts to master an entirely new style, that of the Gun Witch sometimes also called Sorcerer-Gunslinger, Powder-Witch or Ballistic Wizard.  You are a master of firearms, able to use your magic to enhance and your already lethal shooting irons.

Depending on the state of guns in the setting, you might be one of the last remaining members of an ancient, decrepit order that is slipping away in the flow of time, or the champions of the surging future, come to drag this backwards age into the light of progress.  Either way, you are looked upon with a mixture of awe and suspicion.

To determine your Status, roll on the tables below:

1d4
1- One of the last members of a noble class, here to ensure order is maintained.  Your guns are precious relics, your knowledge of the explosive powders that power them secret knowledge, your status near-mythic in some parts.  In the areas that were once protected by your forefathers, you will be received as a noble and a very important person.
2- A new initiate into an order of warrior-priests who worship the skill and power of Man.  You serve the order, as well as a rising Empire, which seeks to uplift all other peoples to the same level as the Empire's current citizens.  You are here on a mission of reconnaissance and perhaps eventually, conquest.
3- A wandering knight-errant, traveling from place to place accompanied by only your prized weapons and perhaps a pack animal. You are looked upon with suspicion wherever you go as a stranger, and this suspicion only grows when the locals who see how you can lay waste to foes much greater than you with but the pull of a trigger.
4- You are the servant of revolution, practicing the ancient arts of your people, long suppressed by the tyrants who rule them now.  You were educated in dank catacombs and distant forest glades, training for the day that you and your compatriots would raise the people to arms against their oppressors.

1d4
1- Ancient, precious relics passed down for a hundred generations.
2- Hand-crafted by the last master of the art, a man you respect more than almost anyone alive.
3- Amateur creations, made by you following the ancient diagrams as best you could.
4- The latest in sorcerous and military technology, created by the greatest smiths and finest materials your Motherland could provide.

They (and other guns in this setting) work by...

1d4
1- Being filled with black powder, loaded with shot and the former ignited by sparks from flint striking steel.
2- Being loaded with fire salts and shot, then using the shooter's mana to excite the tiny fire spirits sealed in their crystal prisms to the point where they destroy their own houses.
3- Being loaded with self-contained cartridges, each one the work of an artisan, each one layered in song, poetry and innate power.
4- The guns are animated by magic and fire bullets using their own mana.  They must be taken care of, loved and properly socialized to be held and used by humans or other intelligent creatures. 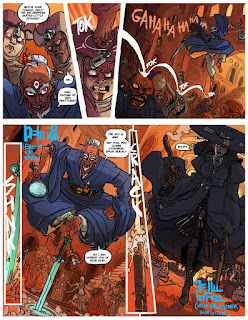 The Gun Witch is a sub-class for my basic OSR Wizard class.  For any other details, see the base class here.

Power: You are beloved by Lady Lead and Father Sulfur.  As an action, you can, as an action, meditate mid-battle to enter your battle trance, a state of perfect, emotionless calm.  When you do this, you get +4 to all your saves against firearm attacks for the next 1d4+COG modifier rounds (minimum 2).  If you are damaged while in your battle trance, you must succeed a CON save to maintain it, otherwise you fall out of it and lose your bonus.

Drawback: You can only cast magic when you are holding or have a firearm on your person.  Ammo is not required.

For each [dice] used to cast this spell, select one of the options below:

You alter your senses, giving you the ability to see the physical weak points in structures, objects or armor.

If you or someone else attack a weak point successfully, they do +[sum] damage of an appropriate type and potentially split it open or destroy the target object.  If the targeted object was a piece of armor, destroying it does not damage the user's HP, but it does prevent them from using that armor.

By touching a creature, you stabilize that creature at 1 HP.  Any effect that would kill the creature in the near future, such as bleeding out, massive internal trauma or something similar is removed as the damage is repaired.

A creature you touch, including yourself, can detect the presence of weapons within range.  This includes anything designed to be used as a weapon or an improvised item that someone intends to use as a weapon, but does not detect things that could be potential weapons, such as glass bottles, box cutters, etc.

You imbue a bullet with the power of elemental fire.  When you fire this bullet, it transforms into a shower of burning contrails and searing hot metal, damaging everyone in a 30' cone, doing [sum] fire damage.

While this spell is active, you may automatically make a firearm attack against any creature that enters this space or moves within the space.  Note that "move" means taking a move action, and not doing something such as making an attack, using an item or etc.

[dice] firearms fail to fire next time they are used.

You may cast this spell as a reaction to initiative being rolled.  You boost your speed, jumping [dice] spots up the initiative order.

You imbue a bullet with a fragment of your power, enabling you to guide its flight through the air.  This allows you to fire a bullet that can perfectly reflect off walls, columns or armor to strike a target of your choosing.  This spell allows you to fire around corners or bounce bullets off hard objects to hit enemies in the back.

By touching a weapon, you can prevent anyone but you from using it.  Any weapon that has this spell cast on it will not work for anyone but you.

If cast with 3 or more [dice], you can have this weapon explode if an unauthorized user attempts to use it.  You can also command a weapon affected by this spell to explode at will.

You unleash a hail of bullets in a cone 10*[dice]' wide.  Any creatures in this cone must save.  On a failure, such creatures take [sum] damage.  On a success, they take no damage.  However, each round for the duration a creature is in the affected area and does not take cover, lay prone or take some other action to avoid being riddled with holes, he must save or take [sum] damage.

You stash [dice] weapons Elsewhere, where they remain in stasis until you will (one of) them to appear in your hand.

This spell is borrowed from Red Kangaroo's Sword Mage.

[dice] bullets become infused with your hatred for [dice] specific creatures.  If those creatures successfully save to take no damage from your next [dice] firearm attacks must make an additional save.  If they fail the second save, they take damage as per normal as the bullets arc around and try to wound the intended targets again.

On a failed save, that creature dies as the next bullet you fire rips through a spot sure to kill them.  For example, on a human, this would be a headshot that splatters the target's brain across the far wall.

You fire a barrage of bullets, doing [sum] damage split as you choose among any number of creatures within range.

This spell comes from my Monk sub-class. 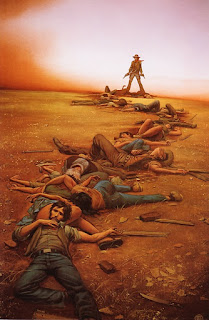 Chaos of the Gun Witch
1d6
1- Your gun fails to fire next time you make an attack.  You will have to clean it before it can be used again.
2- Your bullets temporarily stop obeying the law of gravity, giving your opponents +4 to their saves against your firearm attacks for 1d10 minutes, after which your bullets return to behaving normally.
3- You become magnetic for 1d10 minutes.  All metal within 30' of you is attracted to you.  You make all saves against firearm attacks at disadvantage and if you're holding something metal, you can't let go of it.
4- 1d6 of your bullets become duds.
5- You lose 1 MD.  It doesn't return to your pool until you take a long rest.
6- Your gun fails to fire.  After 1 round, it fires as per normal.  Hopefully you're not trying to clean it at the moment.

Corruption of the Gun Witch
1d6
1- The next bullet you fire misses it's intended target, regardless of spells or other effects on it, and forces a random creature to save vs firearm or be hit.  If the bullet hits, it does damage as per normal.
2- One of the clips of ammunition on your person explodes, doing 2d6 damage to you, save for half, and to any other creature within 15'.
3- For 1 minute, all bullets that strike or pass within 50' of you become enhanced by your magic, and ignore armor.
4- For the next 1d6 minutes, all of your bullets transform into smoke and doves once they leave barrel.  This does no damage.
5- You become beloved by lead for 1 round, and all bullets fired within that round will instead target you instead of their intended target.
6- One of your guns transforms into a poisonous snake for 1d10 minutes.  If the snake is slain, it transforms back.  But be careful, the snake's venom is 1d4 [1= Save or be paralyzed for 1 minute, can make a new save each round; 2= Causes extreme pain, -4 to all delicate tasks (including shooting) for 1 hour; 3= 1d6 damage per round until successfully saved against, 1d6 minimum, 3d6 maximum; 4= Save or die].

Doom of Fools- You become cursed to kill someone you care about.  One creature will meet Death and the end of your guns.

Doom of Kings- Your allies and close friends are cursed that they will all die, soon, and violently.

Ultimate Doom- When you need them most, your guns fail you.  When they do, you will die.  It will painful, but likely short.

This Doom can be avoided by beating Death in a duel or by finding the Spirit of the West and making a bargain with him. 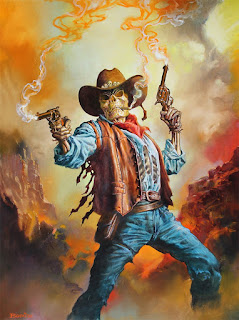