My Problem with Into the Odd

I've recently been looking through some of the old blogs I used to read, and Sooga Games leaped out at me.  About this time last year, I discovered that blog and the wondrous creation of Chris McDowall.  It fascinated me at the time, but after looking over the basics of Into the Odd once more , I discovered my primary objection to the game. 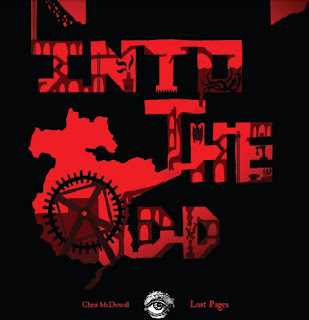 You see, Into the Odd almost seems like an experiment in game design, specifically an experiment that posed the question "How much can we hack off D&D for it to still be vaguely recognizable?"  The answer, as it turns out, is a lot.  Into the Odd has no races, no classes, no attack rolls, only three attributes, no skill list or skill checks, and a handy-dandy chart that lets you build a character in about five minutes, provided you already know what their personality and name will be.

And I don't have a problem with any of that.  McDowell should be commended for what he's done.  I find Into the Odd to be remarkably intuitive, with a fascinating setting and just enough content to stir up the imagination while leaving plenty of blank spots for an creative GM to fill in.  So that's clearly not my problem.  But I did have a problem with Into the Odd, I just couldn't tell you why.

So I kept thinking, writing and rewriting potential additions to Into the Odd to see if I could fix this problem.  I thought I found a solution in my creation, the Odd Fellow.  You see, in the Into the Odd, there are objects called Oddities.  Oddities can be anything from magic hammers that ask you why you wield them to giant fountains that can produce any fluid but water.  As players survive and complete adventures, they acquire Oddities.  These are one of the main ways that players increase their ability set in Into the Odd.  There are some other ways, but I wasn't really aware of them at the time.  I decided to expand upon this, by writing an NPC type called the Odd Fellow.  Odd Fellows are people who bond with a specific Oddity, to the exclusion of all others.  This grants the Odd Fellow a greater ability to use that Oddity, but prevents them from using any others.

And this naturally lead to the idea of letting my players become Odd Fellows.  But as cool as this idea was, it lead me to an immediate stumbling block.  You see, Into the Odd campaigns follow a very simple pattern: Go on expedition--> Get treasure + Oddities--> Sell treasure and useless Oddities--> Go on Expedition--> etc.  But if I am limiting my players to only one Oddity, then that robs them of a lot of incentive to adventure.  And I can't even do what LotFP does by linking treasure to XP, because Into the Odd doesn't have class levels!

Though I suppose this problem is not insurmountable.  I could just get the players very invested in the world, and actually keep track of all the gold they earned, but I hate tracking minor resources like that.  Besides, Gold doesn't really affect that much about the players, not like a magic sword or XP does.  I thought that perhaps the ideas were simply too incompatible; that Into the Odd was a semi-horror game about plucky nobodies venturing into the weak points in the world to scavenge the known from the incomprehensible, and Odd Fellows are based off a concept from Japanese mangaka, Hirohiro Araki.

The concept I borrowed was that of the [Stand]. 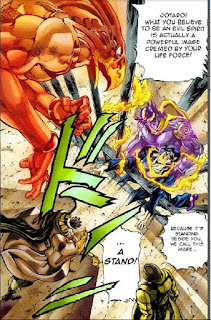 A Stand is like a ghost manifested by a person's body.  Perhaps in the future I will make another post about how Stands work, and how to adapt them to D&D or a role-playing setting.  But that's not the point of this post, as cool as Stands are.  They are a bit out of place with a setting like Into the Odd's, a land of pseudo-Enlightenment revolution, Industrial Age cities, and dark corners crawling with many-mouthed horrors.  Stands are much less jarring in the setting of JoJo's bizarre Adventure, the manga I stole them from, an alternate version of modern day earth, but where everyone wears experimental high fashion, strike fabulous poses whenever the occasion arises, and some people can summon colorful ghosts projected from their bodies.

But I think that ultimately my problem is that Into the Odd is too simple.  It does everything that a more traditional RPG does, but because of its ultra-minimalist construction, every piece is absolutely essential.  You cannot pull anything out or modify it, unlike something with a bit more redundancy.  If you change anything about it, you aren't playing Into the Odd, and that's bad, because it'll cause the whole game to unravel.  And I don't like that.  I'm the type of person who is constantly trying to improve.  I've never run two campaigns exactly the same way, and I have no intention of ever doing so.

Additionally, the other problem I have with Into the Odd is the lack of clear advancement.  Characters in D&D are always getting stronger, better, faster.  But leveling up is much more abstracted in Into the Odd.  And there is leveling, but it just doesn't sit well with me.

And in the end, that is kind of disappointing.  Ultimately my real objection just comes down to mechanics.