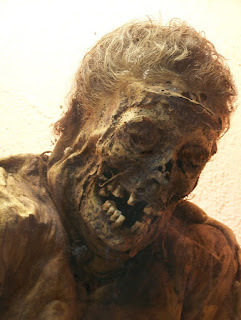 In 1944, a group of Nazi Occultists left the Fatherland and traveled to the Valley of the Kings in Ancient Egypt, in the hopes of raising an army of the living dead to aid their side, as the Toxic had proven unreliable allies at best.  API and certain elements within the Order of Saint Philomena were alerted to this plot, and they raced to intercept the Nazi Occultists.  And while they were unsuccessful in actually stopping the ritual, they managed to interrupt the last part of the process, so when the Tombs in the Valley of the Kings opened, the Nazis found themselves not with a loyal army of undead killing machines, but a bunch of reanimated kings and nobles who only spoke ancient egyptian and had no idea what was going on.

So The Order and API worked together in an attempt to bring these newly born creatures up to speed.  These creatures, later known as Wraps, were very difficult to teach, but eventually progress was made when they finally found a way to communicate between the moderns and the ancients.  The Wraps had to be told about virtually everything that had happened in the last 5,000 years, and most were quite distraught at first to find out how the world had changed.

Wraps are true undead, unlike the Toxic.  They do not need to eat, sleep, drink or rest.  They do not reproduce or age, and when exposed to natural sunlight, their flesh bursts into spiritual flames.  However, despite the fact that Wraps no longer need to eat, many of them suffer from the Hunger.  This Hunger is similar to how Vamps describe their thirst for blood, but more pathological.  It's as if the Wraps remember they are supposed to be eating, or they have some desire for food, despite having no way to process it.  And when Wraps talk about these cravings, and they rarely do, they say they only want meat.  Fresh, bloody, raw meat.

In terms of mindset, most Wraps are, by modern standards, incredibly racist, sexist, and discriminatory.  Most of them hate Greeks, Italians or Muslims, and blame them for the destruction of Egypt.  A few of them even dream of restoring the pharaoh, though this is largely a pipe dream, even among their most politically active.  They largely consider the modern world bewildering, fast, decadent and completely degenerate.  They are as religious as fundamentalists, and most still worship the Egyptian Gods, though it is suspected that some of this might be posturing in an attempt to maintain a small piece of their former identity.  However, these common statements are by no means universal; there are Wraps who have converted to other religions or learned to live with the mores of the 21st century, even though most still frown upon them.

Most Wraps still live in North Africa or in the middle East, with a large minority coming to places like the United Kingdom or the United States.

Threat Level: 6. Most Wraps themselves are fairly law-abiding and mild-mannered, unless you get them talking politics or religion, of course.  But they do pose a danger in the fact that their are those who seek immortality for themselves are trying to hunt them down, to dissect them and see how they were resurrected, and if the process could be repeated.

Law for Wraps:
- Do not reveal yourself
- Do not go outside during the day
- Do not reveal the secrets of mummification
- Do not proselytize about your Gods
- Failure to do so will result in extermination 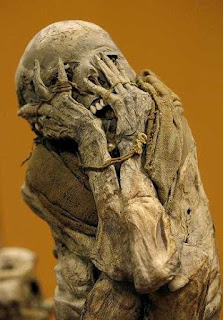 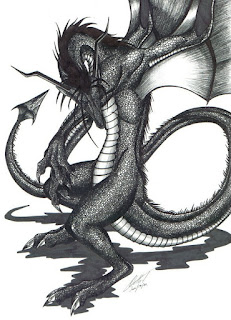 Dragons are pure magical power.  In the past, according to legend, those strong and brave enough to kill dragons bathed in their blood to become invincible.  Siegfried is the best example of this.  And to Wizards, Dragon body parts and dragonsblood is a priceless item, capable of fueling the most powerful magical rituals.

But Dragons today are few and far between.  They live in the most isolated corners of the world, taking great pains to hide themselves.  They learn magic or how to shapeshift, or live in places normally inaccessible to Normals- such as Neverland or in quarantine zones that The Company has set aside from them through their friends in Normal government, in the guise of "natural parks" or "Wildlife preserves" or "Contaminated Areas".

But this scarcity has only fueled the demand for dragonsblood and dragon body parts.  Would-be Dragonslayers scour the world, looking for any sign of these ancient, legendary beasts.  But there have been many attempts by power hungry humans to transcend their mortality by drinking dragonsblood or devouring the flesh of a fallen dragon, in the hope of becoming immortal.  Below we have included an overview of the Centralia incident, one of the most well known incidents of this nature.

One day in April of 1962, when a group of coal miners in Centralia, Pennsylvania discovered a petrified Dragon in a vein of coal, they informed their bosses, who quickly suppressed the information.  The bosses Knew, and wanted to sell this Dragon for parts, and possibly use it to gain power themselves.  When they realized the Dragon was still alive, in suspended animation underneath a thin layer of stone, they were overjoyed.  So they tapped the Dragon's veins and drained some blood, and drank or injected it, in the hopes of transcending humanity.

However, all did not go as planned.  The luckiest of their number were mutated into hideous dragon-human hybrids, possessing only a small amount of the Dragon's original pussiance.  The rest died as their bodies rejected the foreign blood, or exploded into blasts of flame.  In the chaos that followed, the corporate offices caught fire.  This prompted the arrival of the authorities, and soon after, API.  And when they arrived, they quickly rounded up everyone who knew, condemned the town, and using a coal fire as a excuse, evacuated the town and placed the hibernating Dragon under permanent guard, in case it ever wakes up.

The survivors of the Centralia Incident and others like it became Draconi.  Some did gain a modicum of magical ability from their transfusions, but others gained nothing but a hideous, deformed body.  In addition, all lost their humanity.  As such, most Draconi seek to return to their original forms and to regain their humanity, through whatever means necessary.

But their are some who seek to finish what they started so long ago, to finish the process and become true Dragons.  These individuals are usually on the run from API, and looking for true dragons, either for their help or their blood.

Threat Level: 6.  Draconi usually know enough to keep a low profile, and most still consider themselves human, and thus do not seek to kill humans en masse.  Additionally, Most Draconi lack even minor magicks, thus making them easy to dispatch, even with minimal weaponry.  However, Draconi do have a habit for making huge messes and inciting conflicts, whether intentionally or unintentionally, or escalating existing conflicts.  As such, they are to be treated with caution.

Law for Draconi:
- Do not seek out more Dragon blood
- Do not reveal yourself to the populace
- Report any reliable information on a Dragon or its whereabouts to the Company
- Failure to do so will result in Extermination 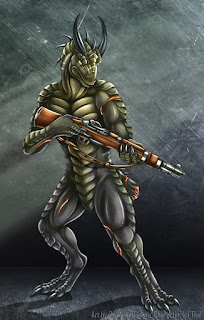 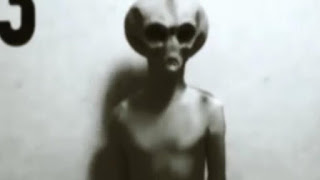 In the old stories, Faeries were known to steal babies and replace them with monstrous versions of the child that grew into horrid louts.  However, this is a folk tale, much distorted by time.  While Faeries almost certainly stole children, they usually did this for revenge against a human or to eat.  The real reason why this story probably got propagated is because someone wanted an excuse to kill a Changeling, and claimed that they weren't human.

And it's not like they were wrong.  They weren't.  Changelings are not human, at least, not totally.  You see, when a Human encounters the Folk as a child, they are changed.  Magic worms itself into the bones and blood, the ancient power of root and stem and stone.  This seed germinates, until one day, usually around puberty, it blossoms in a spray of power.  This power grants the Changelings the ability to change their shape and face to resemble any other humanoid creature, or to change their coloration to blend into their background or become invisible to thermal imaging cameras.  However, they can only use one of these abilities at a time.

Changelings additionally possess the Folk allergy for iron, albeit in a much less concentrated form.  They are hurt more by iron weapons and it irritates their skin, but they can touch the metal without their flesh burning and bubbling.

Now since all Changelings are originally human, most consider themselves at least partially human.  Being branded a Xeno by API is a very sore point among most Changelings.  Most conceal their abilities and attempt to live among humans, and for the most part, they are allowed to, as long as they conceal their powers and altered nature.  However, some gleefully accept their newly received powers, and use them for personal benefit.  This can mean anything from pretending to be a celebrity, to making themselves more attractive so people will sleep with them, to other, more sinister behaviors.  There are many rumors of criminals who change their faces after every crime and thus are never identified, or criminals who will frame people for crimes.  Frustratingly few of these rumors have ever been confirmed.

Changelings tend to be concentrated in areas near where the Folk live or are suspected to live.  Though this is hardly surprising since Changelings are created through contact with the Folk.  In such regions, Those who Know and Agents of API tend to wear iron jewelry to indicate that they are not a Changeling.  Some Changelings attempt to blend in by wearing matching jewelry of lead, aluminum or chromium.

The most common theory is that Changelings are created by accidental exposure, or by human women seduced by the Folk.  But there are some who claim a darker agenda, that the Changelings are unwitting pawns in the battle between the Folk and some other foe.  Their is little evidence for this belief.  Additionally, what foe could possibly challenge the Folk?

Threat Level: 6-4.  Changelings not only possess strong powers individually, but they also possess a great deal of organization.  Their little cells are capable of wreaking immense havoc, but they usually do not engage in open hostilies.  Rather, Changelings who violate the Peace or the Masquerade or the bylaws of the Company usually focus on infiltration, espionage, and assassination.  In areas near Folk sites, caution and proper vigilance should be exercised at all times, and Anti-Changelings measures should be implemented.

Law for Changelings:
- Do not impersonate public figures or Agents of the Company
- Do not reveal your powers to others
- Failure to do so will result in extermination 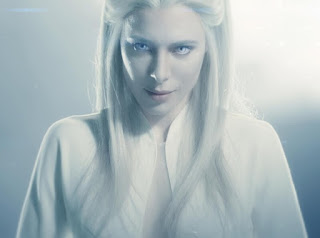