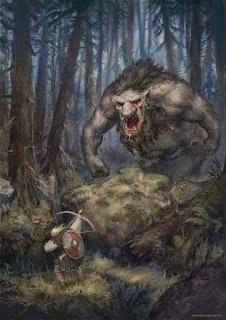 Trolls are ancient and eternal creatures.  Their true origins are lost to time, but it is said they are the descendants of Giants or some primordial race of carnivores, or they could be something even stranger, such as them being the semi-mortal, ageless descendants of some hungry pantheon of Gods that no longer exists.  Regardless, the Trolls exist, and in the dark corners of our world, they squat and hunt, devouring anything that dares enter their territory.  Young Trolls are a menace, and ancient Trolls are a worthy foe for almost anyone.  They are the reason most Dragons breathe fire, most Wizards have some fire magic, and all humans have acid in their stomachs.

In appearance, Trolls range from dun-colored to dark green, sometimes hairless and other times sporting thick manes of hair. Trolls also appear to be sexually dimorphic, with male Trolls sometimes possessing beards and mustaches, smaller nipples and straighter bodies, along with male genitalia, while female Trolls usually have no facial hair, breasts and female genitalia.  Additionally, many female trolls also seem to possesses uteruses and Fallopian tubes, and if they are known by a man, they sometimes bear half-breed children.  Trolls are also known to breed true with each other, although this is rare, as Trolls usually reproduce through their regenerative abilities.  As such, the ability of their females to carry offspring to term is strange, and presents far more questions than answers. 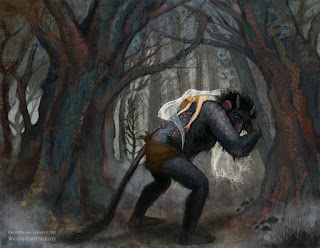 However, female Trolls who do become pregnant not only need more food, but they also become more vulnerable, so this is not desirable.  As such, female Trolls who allow themselves to be known and impregnated will gather protectors to themselves to make up for their vulnerability.  These protectors will usually fight to the death to protect her, especially if the Troll is carrying their offspring, as if a female Troll is early on in her pregnancy and comes under significant threat, she will sometimes reabsorb the fetus to continue regenerating.  This is why female Trolls are often protected by fetal ghosts, offspring who never were, devoured in the womb by their mother.  They usually oscillate between hating and revering her, depending on the day.  Additionally, sometimes, if a female Troll has accepted her own death, she will sometimes use her regenerative powers to accelerate the growth of her child, so that it will survive her passing.

These female Trolls are called Mother Trolls, or sillier names, and they form large groups similar to a polygynous household. There are the Trolls' husbands, her half-breed children, and occasionally a few fetal ghosts who are bonded to her.

Male Trolls tend to not reproduce with anyone other than female Trolls, though this is probably because of the relative fragility of human women, and not any other concern.  In truth, female Trolls are largely asexual as well, and usually do not form relationships on their own, but usually stumble into the role after spending some time near a welcoming tribe, because of the added security and  abundance of food their suitors provide. 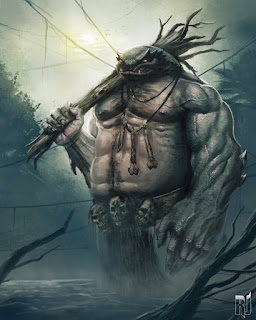 Now, onto the subject of the Troll's most recognizable and lethal feature: their regeneration.  Trolls can regenerate from a single cell, unless that Cell is eaten by an enterprising amoeba or drenched in acid.  And at the molecular level, even a relatively weak acid such as formic acid will kill a Troll cell and prevent it from dividing.  Additionally, Trolls must have enough calories to regenerate.  While they have large appetites even outside of a combat situation, when regenerating or having just regenerated, they metabolize food like a jet engine.  As such, one "solution" to a Troll is to trap it somewhere and just wait until it runs out of food.

However, if given sufficient calories, a Troll can recover from any injury, given time.  The one thing a Troll cannot heal is flesh burned by acid or fire, which is why they fear such things.  Instead, Trolls just tear off the burned areas and regrow the areas where the flesh was torn.

But that is not even the limit of Troll regeneration.  If a Troll severs a limb, the limb can grow a body.  Thus, a decapitated Troll will sometimes result in two Trolls, albeit one much smaller than the other but two Trolls, nonetheless.  Trolls use this method to escape capture or summon back-up.    (This is how Trolls usually reproduce, by the way).

Trolls will also throw chunks of troll meat at you.  These bits of troll will begin growing into tiny trolls and will scramble all over you, attacking you and biting your eyes.  If these bits of Troll meat get inside you, they will chop their way through your blood vessels into your internal organs, where they will feast.  Your death will be brief, but painful.

Finally, Trolls have a genetic memory.  Anything that the original Troll remembers a new Troll that grew from their cells will know implicitly.

Finally, besides fire and acid, their is one other way to get rid of a Troll.  If two Trolls find themselves at a disagreement, they will sometimes fight, and if one is the victor, the victor will attempt to devour the loser.  If they manage to do so, the loser's flesh will be assimilated into the victorious Troll, who will grow stronger as a result, and all the loser's knowledge will be passed into the victor.  Sometimes these are called "Troll Marriages", though that joke was never very funny for very long.  And it should be noted that when two Trolls combine like this, the result is always a very different being, not just a combination of the two Trolls, but a whole new entity entirely.  Additionally, sometimes Trolls will deliberately seek out this fate, and allow themselves to be feasted on, to finally transcend their mortality and leave this world.

Trolls that result from these "marriages" know everything that the two previous Trolls knew, and is usually as stronger than both original Trolls.  The whole is greater than the sum of its parts, so to speak. 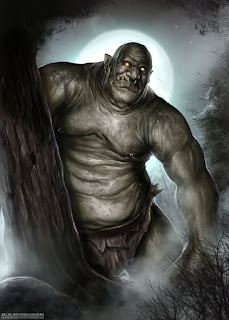 Genetic Fear: If Trolls see you have fire or acid, they must make a Mor check.  On a failure, they will retreat.

Regeneration: Trolls regenerate 2 HD a round, unless they've taken fire or acid damage since before their last turn.

Tactics:
- Charge into the fray
- Grab the weakest one and throw them at the strongest one
- Stab everyone else
- Retreat if you see fire or acid 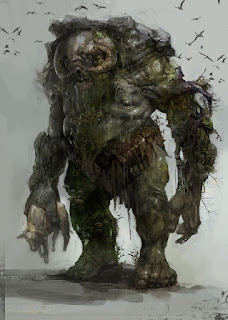 To generate a unique Troll, roll on the tables below:

*How old is this Troll?
1d4
1- Newborn.  Recently spawned from another Troll or so young they are essentially newborn.  1d20 years old or less.
2- Immature.  A Troll that has yet to truly accomplish anything.  Ancient by your standards, but quite young by their own standards.  1d10*10+20 years old
3- Mature.  A Troll that is older then you can imagine.  A being that likely is older than your civilization.  1d1000*1d6 years old.  The Troll has forgotten more than you will ever know.
4- Ancient.  A Troll that is so old, time has lost all meaning for it.  It has always existed, and will likely continue to exist long after your whole world has fallen into ruin.

What is this Troll's Mentality?
1d4
1- The Troll is eager to be reabsorbed.  While ageless, it still fears death.  It wants to return to the blissful unconsciousness.
2- Independent.  The Troll wants to experience as much of the world as it can.  Go and enjoy itself for once.
3- Jaded.  The Troll has tasted the pleasures of this world, and found them wanting.
4- Enlightened.  The Troll has rid itself of all desires, good and bad.  It can feel the minor currents of energy that flow through the world, the heartbeat of time, the thoughts of God himself.  It does not care for anything anymore, and will accept anything that happens to it with saintly grace.

What does this Troll want?
1d4
1- Peace and Quiet.  Go away, your heartbeat is distracting.
2- Meat.  The Troll is hungry.  And while Trolls are always hungry, this time more than usual.
3- Something it can read.  Trolls like books, but it may not be able to read the modern version of your language.
4- A conversation partner.  The Troll hasn't spoken to anyone intelligent or well-read in a long time. 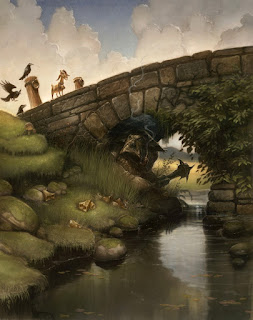