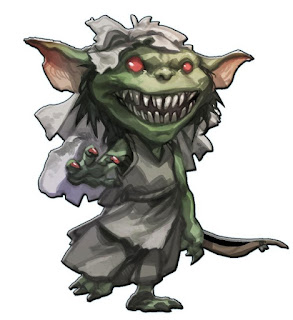 Goblins are a well-known type of Folk.  They are short and green, with pointed ears and eyes of jet black.  Their mouths are always too wide and full of too many teeth, and they never, ever stop smiling.  They wear no clothing except for the occasional loincloth, and their women sometimes are known to wear a strip across their chests to cover their breasts.  Goblins are unusual among the Folk for several reasons.  Firstly, they are smaller and generally weaker than other Folk.  Secondly, rather then a dispassionate loathing, they seem to idolize or even admire Man.  They are obsessed with human concepts, but especially with language, mathematics, and most of all, commerce.  And thirdly, they are known for their ability to make Human-suits.

A Human-suit is made like this.  First, a Goblin or something else will kill a person.  Then the Goblin will take the dead body and cut the skin off it, flaying it expertly.  Then using their odd magicks, the skin will be stuck back together and inflated to look like their is still something inside of it.  Finally, the Goblin will crawl in through the mouth and once inside, will be able to walk around in their Human-suits.  And despite their crude origin, Human-suits are actually incredible good disguises.  While wearing one, a Goblin is indistinguishable from a normal human, except for a few small things.  For starters, whenever you take the heartbeat of an occupied Human-suit, it will always seem much, much higher than normal.  This is the Goblin's heartbeat.  But luckily, Human-suits are not a big problem, as Goblins who wear them are usually terrible at imitating human behavior.  They constantly smile and always laugh too long at jokes.  They ask strange questions about basic things, and are weirdly fascinated by things that should be obvious to a normal person.


<DM Note>
Goblins, when not in the wilderness or areas not frequented by humans, wear Human-suits.  Only in the company of other Goblins or Folk who are aware of their nature do they walk around without them.
</DM Note>

But back to their Love of Commerce: Goblins love to buy and sell things.

Goblins love to buy and sell things, including things that it should not be possible to purchase.  To see what a Goblin is selling, roll on the following tables.  All Goblins possess 1d6 of these items.  Additionally, Goblins also sell weird drugs and alchemical supplies.  Finally, if you're willing to pay extra, or promise them something extra valuable, or just a regular, they will easily go above and beyond the normal for you.  If you need something, odds are a Goblin can find it.

Random Goblin Treasure Table
1d20
1- Human faces.  Wear it like a mask and it becomes your face.  Goblin has 1d10 faces, of varying beauty, sex, age and race.
2- Cursed Fortune cookie.  Break it and read the fortune to suffer a horrible fate.  The Goblin knows the cookie is cursed, they will tell you.
3- A vial of dragonsblood.  Worth a princely sum, if you can find a buyer.  And for anyone willing to buy it, there will be three people trying to take it.  Drinking it might enable you to surpass humanity, if you pass a Save.  Though the side effects are said to be very intense.
4- A treasure map.  Leads to ancient, forbidden, or hidden locations. However, their may no be any treasure there.  The Goblin will avoid answering any questions about this, and will insist that it would be ridiculous if there was no treasure there.
5- A beautiful woman, currently asleep.  This woman is: 1d4 [1= A normal human, kidnapped and sold at auction; 2= A Perpetrator; 3= A Woman's body, but there is no soul inside.  The body would be a perfect vessel for a ghost, or another type of entity; 4= Something else entirely.]  The Goblin will give you clothes for "her", if you like.
6- An egg.  The Goblin does not know what is in the egg, and does not wish to find out, or be around when it hatches.  What is in the egg: 1d6 [1= A Dragon; 2= A Faerie; 3= A Xeno of some sort; 4= A seemingly normal Human; 5= Nothing.  The egg is hollow, and hides a treasure of great value.  The owner of the treasure will hear the egg breaking, and will come for you; 6= A Messiah.  The savior of a long-forsaken race will be born from this egg.  Kings and prophets are already on their way.]
7- A business card for an unsavory entity.
8- Five Alarm Hot Sauce.
9- A camera that captures a tiny piece of someone's soul when they have their picture taken.
10- A crystal ball.  The crystal ball does not actually foretell the future, but it can create illusions within it, and the user can control these visions.  Hope you're good at cold-reading.
11- Something you've forgotten.  This is a missing memory, one that the players have totally forgot.  When you get this one, it should be like a complete mind-fuck, suddenly you rethink your whole life.  For example: Someone you thought was dead was actually alive, you didn't kill them as you thought you did.  And don't worry about consistency, the less sense this makes, the better.
12- A missed opportunity.  If the players regret not taking an option you gave them in the past, suddenly that previous path becomes open to them again, if they so choose.
13- A magical box.  Anything placed within the box becomes infinitely desirable.  If you see the contents, you must save vs charm or desire it.  However, as soon as it is removed from the box, the effect ceases.  Right now the box contains an ordinary pine cone.
14- Ring of Trees.  Put it on and you become a tree.  Take it off and you stop being a tree.  You cannot remove the ring yourself while a tree.
15- Your autobiography.  This is the book you will write about your life in the future.  Foretell future events.  If you change the future, the book becomes worthless except as a keepsake.
16- Liquid Moonlight.
17- Mooncloth.
18- Glass goblet.  Changes color depending on what liquid is poured into it.  If poison is put into it, turns black with skull print.
19- Hydra Tonic.  A potion of healing.  Restores you to full HP and regrows any damaged limbs.  Regrown limbs have a 2-in-6 chance of regrowing ending in a mouth instead of a hand.  Also, if you drink this, if your head is cut off, you may save vs death.  On a success, you regrow two heads.
20- That one thing you need.  If your players are looking for a Macguffin, the Goblin has it and doesn't realize it's true value. 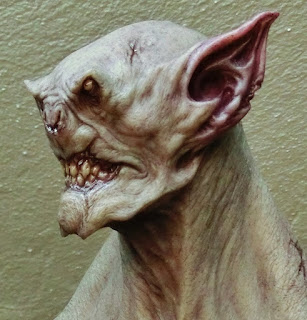 Now, onto the matter of payment.  Goblins understand the concept of money, but much of it holds little value over them(with certain exceptions).  But normally, Goblins barter for things.  They are good negotiators, but what a Goblin values is often vastly different than you.   For what a Goblin charges for their goods, roll on the table below.

<GM Note> For the first option, be nice. For the second option, be fair but also exact. For the third option, be as mean as you possibly can be.  </GM Note>

Goblins do not take IOUs.  They expect payment immediately.

And while you can rob a Goblin and take their goods, the Goblin may fight.  But if you pose an enormous threat to them, the Goblin may just leave their treasures and run away.  But if the Goblin gets away, expect a world of hurt.  For starters, all the people who relied on the Goblin will be coming after you for revenge, as once a Goblin gets driven off, it rarely comes back to the same area.  Secondly, you now have a bunch of rare treasures.  And while robbing a Goblin is all but impossible, robbing someone who has already taken its treasures is child's play.  Thirdly, the Goblin may put out a bounty on you.  Goblin bounties tend to be fairly lucrative, if you can manage to find the person who took their treasures. 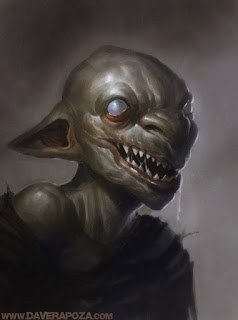 Illusion: Goblins can make illusions out of stardust and glamour.  But these illusions are fairly weak, and if you take an action to examine an illusion and succeed a DC 13 WIS check, you can reveal them to a hollow shell of light.  It takes a full action to weave an illusion, and the Goblin cannot be touching any cold iron while making an illusion.

Human-suit: If the Goblin is wearing a Human-suit, as long as it is at full HP, it looks like a normal human.  But once it has taken damage, it resembles a normal Human.

Truth-Teller: Goblins cannot lie.  They can muddy the issue, dodge the question and not answer, but they cannot lie directly.

Tactics:
- Run away
- Hide and make sneak attacks
- Hit and run, wear them down
- Don't get into a slugging match

Goblin Weapons:
- Blowpipes.  1 damage+poison.  Goblins smear their darts with all sorts of hideous things, from poisons to hallucinogens to feces.
- Slings.  Throw stones or other stuff.  Other stuff includes smoke pellets, improvised stun grenades, flashbangs, glass balls full of green slime, etc.
- Daggers.  1d6 damage.  Made of bronze, obsidian, or bone.  Very sharp, but breakable.  Weapons of last resort.  If a Goblin is in melee combat with you, it's likely already lost.

When, or if, the players get into a Goblin, play as ruthlessly as you can, but remember, you're not trying to kill the players.  As a Referee, it's your job to make fighting a Goblin, your goal should be to escape, or to make fighting you such an intolerable experience that the players give up.  So a Goblin encounter is not like a traditional stand-up fight.  Play dirty, and exploit your players paranoia.  Throw illusions at them, have Goblins hide under beds with a readied action to shoot someone in the eye with a dart covered in neurotoxin, throw, have the Goblins lead them into confined places then throw firebombs, etc.  Get devious.

Goblins usually travel in groups of 2-6, with all members of the group being either business partners, friends, employees, lovers or some combination therefore. 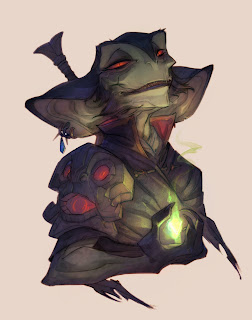