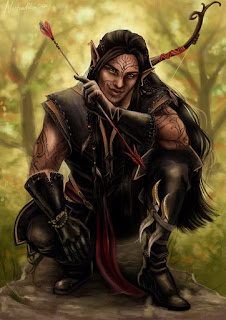 I honestly hate reading other people's retro-clones, because they're all so similar.  We all have the saem goal and we're all drawing from roughly the same sources, so perhaps it should be no surprise they're all so similar, but it still makes it a bit annoying.  So I won't waste your time rambling about mine.  This is the Scoundrel Class.

Scoundrels are my versions of Thieves or Rogues.  They have no powers relating to traps, locks or climbing.  Everyone can do those things.  Instead, I'm adapting the Dark Heresy class of Scum for D&D.  Scum in thhat system are kind of grab-bag of abilities, but they generally focused on 1) being the face in criminal or illict arenas, 2) being very hard to kill, and 3) being able to get in a good hit if they set things up properly.  That's what I tried to capture with this class, a hard-bitten survivor who comes from a rough neighborhood, metaphorically.  Scoundrels don't necessarily have to be bad guys or steal stuff, but they are familiar with the underclasses and criminality, and know how to deal with rough men who have rejected society's script in favor of loose women, quick cash and street cred.

Contact: You start the game knowing a guy.  For a favor, he can answer any of your questions, and maybe do something minor for you.  For every new place you visit, you can make a WIS check to gain a new Contact there.  Example checks: 5 for a seedy city, 10 for a respectable city or town, 15+ for a small town or nice neighborhood.  On a success, you gain a new contact in this area.  At level 3, when you try to find a Contact, you can instead look for a Fence.  Fences have less knowledge then contacts, but they buy stolen goods, no questions asked.  At level 5, you can try and find an Enforcer.  Enforcers are the hired muscle who work for crime bosses and syndicates.  Knowing one is the first step to joining such an organization.  Additionally, Enforcers can get you access to information, goods and favors that no one else has.

But a word of warning.  To get anything out of these guys, you have to promise them a favor.  And if you fail to ever make good on your word when they contact you and ask you to do something for me, word will spread, and no one will want to help you.

Criminal Encyclopedia: You grew up around crime and criminal activity, and thus know it pretty well.  You automatically know anything someone raised in a rough neighborhood would know, such as local gangs and rackets, crime bosses, how to steal a coin-purse without getting stabbed, etc.  Most of this knowledge is automatic, so if the Thief is about to do something dumb, you (the Referee) should tell them about the mistake they're about to make.  Additionally, unless failing to know something might have dramatic consequences or there's no way the Scoundrel could know, answer any questions the Scoundrel might have on criminality.  If in doubt though, call for a check.

Knife Fighter: When you make a successful attack against someone with a dagger or knife, you can wrestle them to the ground and automatically do damage to them next turn.  However, you will be opening yourself up to retaliation, with each round you cling to them giving the enemy +1 to hit you.

Sense Motive: You can make a check to try and determine someone's motivation while in conversation with them.

Fast Hands: When you attack an enemy and successfully hit them, you can, instead of dealing damage, do something else to them, such as pick-pocket them, cut their sword-belt so they drop their sword, or plant something on them.  However, this does not work on something someone is actively protecting.  For example, if they are currently tightly holding onto something, Fast Hands could not take it from them.  But if it was hanging from their belt, it could.  When in doubt, the enemy gets a saving throw.  On a success, the Thief cannot do what they asked.

Escape Artist: You are slippery like an eel.  If you can think of no way out of situation, no clever way to escape the clutches of a foe, 1/Day your criminal mind can suddenly reveal an escape route.  The Referee should immediately point out a weak-point in the enemy's defenses, a potential chink in the armor, or some other vulnerability you overlooked.

Note to the Referee: This is not where you just let the players go.  All you should do is tell the players about a weak point and give them an escape route.

Smash and Slash: When you use Fast Hands, now you may also deal damage if you choose to.

Great Escape: You may now use your "Escape Artist" Ability 2/Day.

Clean Cut: Whenever you strike an opponent with a successful attack, 1/Day you may make your attack count as a critical hit.

One Last Job: If you are ever trapped in a desperate situation with no way out, Once and only Once, you can suddenly reveal how this was all according to your unforeseen master plan.  Suddenly the tables turn in your favor, and your comrades achieve victory, but your fate is left ambiguous, such as you were last seen wrestling Moriarty and tumbling off a ledge, or you were accidentally shot by your own allies at the last second, or something equally tragic.  However, there is no chance this actually killed you, and you'll be back. 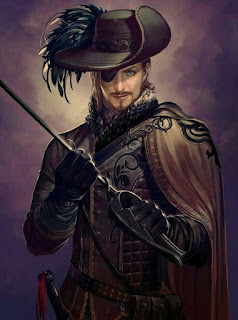