I made some cryptic notes to myself a long time ago about wanting to make a bunch of famous magic weapons.  The thought laid dormant for quite a while, but recently, I found the inspiration to make it.

This is part 1 of an X part series, detailing some of the famous magic weapons I came up with.

However, before I begin, let me include a notice: I chose the pictures for these posts based on what I could find.  The swords don't look exactly like anything depicted here.  For my games, I would refer to the description over what was written.

Nine semi-legendary swords, from all four corners of the world.  They are powerful and dangerous and incredibly valuable.  They are the less rare counterparts to the Seven Swords of God, which are priceless and valuable beyond measure.  Still, the Angel Blades are nothing to sneeze at it.  They could easily be worth their weight in gold, and they will attract as much attention from would-be buyers as they will from thieves.  As such, most people who have them keep them concealed, in case a crafty or opportunistic thief is in the area. 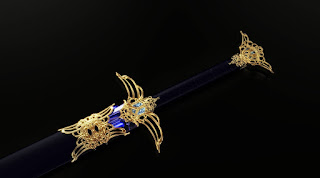 Appearance- A kopis.  The hilt is inlaid with lapis lazuli, which shimmers brightly when the sword is activated.  The blade is warm to the touch, and seems to be wriggle in your grip.

Power- As a free action, you can draw power from the blade into yourself.  You may do this on your turn or as a response to being attacked.  This will increase your speed by an incredible amount, giving you a +2 bonus to any roll based on speed, an attack or a defense roll.  You may do this as many times as you like and the bonus stacks.  However, each time you increase your speed beyond the first, you must save.  On a failure, you take damage equal to your bonus. 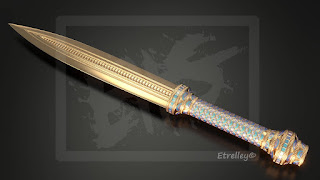 Appearance- A sword with a leaf-shaped blade, made of bronze with a hilt wrapped in stainless white fabric.  Nothing stains the blade, and when swung, distant ethereal music can be heard.

Power: As an action, the wielder becomes transfigured, gaining a fly speed equal to their movement speed, the ability to levitate, and becoming shockingly beautiful.  Their skin shines like the sun, their clothing shimmering like precious jewels or distant stars.  All who look upon the wielder as they are now must succeed a saving throw to be able to harm them, and enemies must check morale to continue this battle. 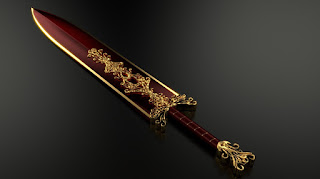 Appearance- A blade of black obsidian, inlaid with blood-red runes.  The blade is edged and impossibly sharp, its wicked edge visible from across the room.

Power: Any blood that flows across Sanguine transforms into golden ichor, including the blood around where they were stabbed or slashed by Sanguine.  This golden ichor heals the virtuous for 1d6 HP if they drink it, while the wicked are damaged by it, taking 1d6 damage if more than a drop touches them.  Referee's discretion on who is virtuous and who is wicked.  If a wicked person is stabbed by Sanguine, they take an extra 1d6 damage as ichor spills from their wounds. 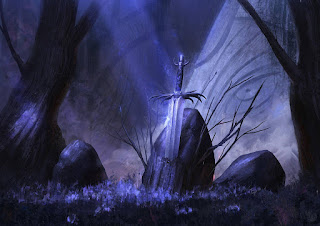 Appearance- A massive sword with a cross-guard, like something from Scotland, a huge bastard sword.  Has a large metal guard around it's hilt.  At the bottom of the hilt is a massive ruby.

Power: If the wielder is attacked and damaged, once per round, they may reduce the damage taken by Safeguard's damage dice.  However, if the wielder allows any of his allies to fall (to 0 HP or below) and he could have prevented it, Safeguard deals to the wielder half the damage from the attack that felled their ally (min: 1).  The wielder knows this from the moment that they first begin to use Safeguard. 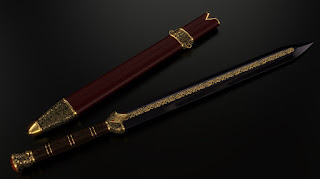 Power- As an action, the wielder may prevent one person or entity within their field of view from using any form of magic (Referee's discretion on what counts as magic).  While this person or entity's magic is sealed, they lose all active magical abilities, but passive ones, such as a Folk's vulnerability to iron or an Outsider's Damage Threshold will remain. 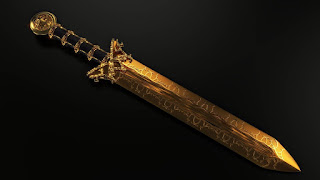 Appearance- The blade is made of gilded bronze, with a hilt adorned with red gold.  The air around the blade shimmers with heat and the blade is perpetually warm.

Power- Scorch causes any blood it comes in contact with to ignite.  Anyone cut with Scorch has the blood in their veins set on fire, doing 1d6 damage to them for each round until they run out of blood or burn alive.  The last part is the more likely outcome, the flames licking up your veins until they reach your lungs, before blooming within and bursting out your mouth as you perish.  If the blood in your veins is caught on fire, immediate amputation or removal of the nearby tissue is the only way to prevent further damage.  Scorch's wielder can also cause any fires lit by Scorch to be snuffed out at a command, though the wielder is not immune to the effect of Scorch's flames. 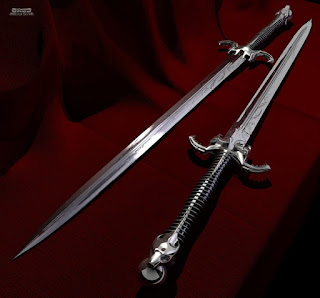 Appearance- The blade is made of pure silver, the hilt carbonized steel.  Clear diamonds rest in the hilt and the cross guard.  When electricity flows through the blade, the diamonds shine like searchlights.

Power- The wielder can, 3/Day, as a full action, if they have a clear sky overhead, call down a lightning bolt to strike a target of their choosing within their field of view.  The person struck takes 4d6 electrical damage, save for half. 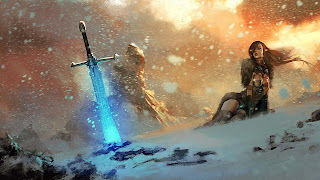 Appearance- The blade is some kind of hooked saber.  It is made of translucent, mostly clear quartz.  The hilt is wrapped in soft furs, and has a large handle to make it easy to grab, even if one were wearing mittens or something like that.

Power- As a full action, the wielder may cover himself or another person in ice armor, giving them +6 to AC and making them take 4 less damage from sharp weapons, acid and fire.  However, unless the person is wearing protective gear under their improvised armor, they will rapidly begin to suffer hypothermia from being trapped in the ice. 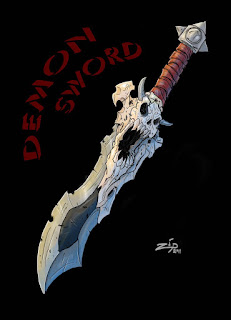 Appearance- A worn, notched steel dagger.  Ancient and well-used, yet it seems almost modern in style.  Radiates a fell power, making goosebumps rise along your arms as you reach out to touch it.

Power: 3/Day, as a free action, the wielder can force an opponent to reroll their dice when they contest* an attack roll and force them to take the worst outcomes.


*I recently updated my house rules where instead of rolling against a static AC to see if you hit, attacker and defender both roll d20s and the higher roll wins.  If you don't use this system, see below:

Power: 3/Day, as a free action, the wielder may make an attack against an opponent as if they were wearing no armor at all, and only had base AC.  This does not negate Damage Thresholds or work against natural armor (such as a Dragon's scales).  But all other armor instead becomes insubstantial to Slaughter, which passes through them like they're made of smoke.
By Yami Bakura at January 11, 2019