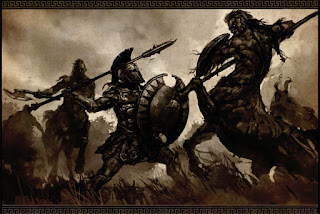 Melee Combat:
- Do not roll vs a Static AC, instead roll 1d20 and a damage dice.
- Your opponent rolls a 1d20 as well, along with their damage dice.
- Both of you should add any attack modifiers to your d20 roll and any damage modifiers to your damage di(c)e, respectively.
- Higher roll wins.  If the attacker wins, they do damage equal to what they rolled on your damage dice.  If the defender wins they take no damage instead.
- Any attack that does max damage (ex: rolling a "4" on a 1d4) does normal damage and causes a Horrible Wound.

HP and FS:
- Players have two pools of HP
- Enemies only have HP
- HP:
+ Stands for Hit Points
+ The physical integrity of your body
+ If this gets damaged you can take damage to your body
- FS:
+ Stands for Fighting Spirit
+ This is your willpower, magic, and your ability to defend yourself
+ When you take damage to this, all injuries are minor, or the attack misses in the fiction, even if you take FS damage
+ It's like one of those blows in a fight scene where the Hero evades a blow just barely
+ While you have at least 1 point of FS, you cannot receive a Horrible Wound
+ If your FS is extinguished, if there is any leftover damage, it doesn't "roll over" into HP

Armor in a world with no AC:
- Armor has a rating, from +1 to +6
- When defending, instead of rolling damage dice, you can just add your AC to the roll

The above is my old System, I have decided not to use it.  Now the Armor Rules can be found here.

Horrible Wounds, and how to acquire them:
- I use Emmy Allen's tables and rules for these.  She came up with it, not me.  Find the tables here. 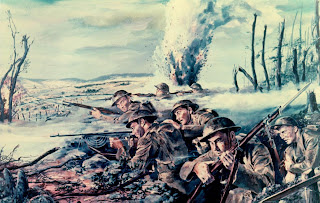