So I realized that in my new combat rules, where you contest enemy attacks by rolling 1d20 + weapon die and the higher number decides whether or not you get hit, AC is vestigal.  So I was tempted to cut it, but at the same time, I felt that Armor does have a place, I just needed to make one.  The idea of no one placing any stock in the armor they wear is silly, unless you're a Barbarian or something like that.  This makes even less sense in a setting where there firearms or even more advanced weapons are available.

As such, I thought about it, then came up with a clever, though unoriginal solution.  It is based heavily off the "Shields will be Splintered" rule. 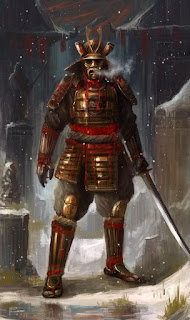 Ask yourself the following question; could it protect the user from the source of damage?

If No, then the Armor cannot reduce the damage taken.

If Yes, there are three levels of effectiveness for any armor's protective qualities.  The armor might be Not Suited, Capable or Designed.

Not Suited means the Armor can only offer minimal protection from a certain type of damage.  For example, a kevlar vest meant to stop bullets is largely useless against a dagger, while plate armor is effective against swords but is reduced to a metal bag to keep your insides together against a crossbow, and etc.

Capable Means that the Armor is at least somewhat effective at reducing the damage from a source.

And Designed means the Armor was designed to mitigate this type of damage.

Note the Second: I use the term Armor, but not all of this has to explicitly be armor.  For example, a fireproof racing suit could be effective armor against fire damage, while a Spacesuit could effectively protect against cold damage.

- Diffusion (Lasers 1d10).  Designed to be used as body armor for soldiers primarily fighting enemies equipped with laser weapons.  Come in thin, flexible vests, overcoats that can be placed over ceremonial armor, or entire suits covered in diffusion tiles and grounding lines.

- Ceramic (SP (Solid Projectile) Weapons 1d10; Bludgeoning 1d8).  A layer of interlocking plates that crack and fracture under pressure to stop bullets.  Come in Vests with variable amounts of concealability or in full suits that can cover one from head to toe.

- Cushioning (Bludgeoning 1d8).  Not actual armor, this is safety gear designed to protect contractors and laborers working in areas where falls and falling debris are common dangers.

- Liquiplate or L-plate (Bludgeoning 1d8; SP Weapons 1d6; Sharp 1d6).  Armor made of pockets of smart liquid that compresses and becomes rigid when struck.  When the force is dissipated, the liquid returns to its usual state.  Very expensive but quite effective.

- Personal Energy Screens or "Peas" (Lasers 1d10; Plasma 1d8).  An energy screen is a device that creates a magnetic field around the person wearing one, channeling ionized radiation, lasers or plasma away from the target.  Largely useless at anything else and can be overwhelmed by too much energy and they prevent you from wearing other armor and they don't totally work, but you'll never forget the first time someone fires a point blank laser at you only for it to strike the air an inch before you and harmlessly dissipate.

- Personal Shield Device (Bludgeoning 1d10; Sharp 1d10; SP 1d10).  These are the cream of the crop, the height of personal armor.  With the push of a button, a wall of mostly translucent energy will form around you and guard you, protecting you from almost anything.  Physical weapons and solid bullets are a joke to you now.  Lasers can still penetrate the shield, which creates tiny distortions in space-time, but these are often wildly inaccurate due to the twisting path they must take through the shield (advantage on all saves vs firearms if its a laser weapon).  Unfortunately, unlike a Screen, this won't protect you from a Powered or a Plasma Weapon, as the former can undo the distortions around you with their own fields and the latter cannot actually penetrate your shield, but doesn't need to, and will just cook you from the outside. 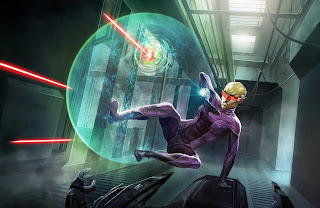