SOS: The Powers of the Pirova Sector

Peer pressure is a pain.  I saw Dan D's post on this subject and now I have to post my own list.  These are the Powers for Sea of Stars.  If you don't know what Powers are, then you clearly haven't read this post or listened to enough of The Magnus Archives, a fabulous podcast that is both scary and intriguing.  I highly recommend both. 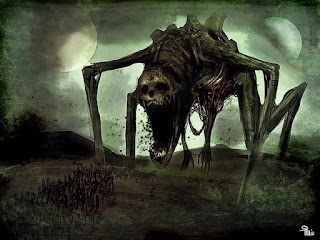 The Smiling God/The Sickly Sun/I-am-Rotten: A blazing light that conceals ugly truths, a deception that is believed either out of choice or because there is no other choice.  A spotlight and pancaked-on makeup to conceal the fact that your idol is actually a rotting corpse.  You can see the scabrous, peeling flesh, but you don't dare stop smiling.

The Cage/The Domesticated/I-Am-Shackled: A set of bindings, fitted around your wrists and ankles.  A rope that you thought you could break, but it turns out it was looped around your heart, not just your neck.  The fact that you can leave your oppressors behind, but their teachings will linger in your heart for a long time, maybe forever.  They have shaped you into what they desired and now, you don't know if you can become anything else.  And if you did manage, who would you be then?

The Peak/The Island/I-Am-Prey:  The pitiless, ruthless indifference of Nature.  The vast, concealing depths of the sea or the razor crags of the mountain.  The savagery of wild predators.  The desperate, savage will to live, to do anything to survive.  To release that you might be the prey being hunted.  Or worse, the predator.

The Masquerade/The Court/I-Am-Awake:  To discover the horrible truths you always suspected, but never knew, only to find out they were worse than you ever realized.  To be awakened to terrible knowledge, to bear the burden of knowing alone.  To be changed by what you understand, to recognize the slavery of your fellows, to know they might not ever understand.  To be welcomed into the Court of the Radiant King.  To recognize him- for you always knew.

The Conspiracy/The Order/I-Am-Secret:  To realize you are being watched, followed, surveilled.  By what or who is unknown, but you know that it is true.  To recognize that things you thought were normal are actually traps.  To realize that your friends, family or allies might be secretly trying to undermine you.  To find out that you are just a puppet, dangling on strings you just now see.  Be careful if you wish to cut them, the puppeteers might notice.

The Void/The Maw/You-Are-Finished:  To recognize your own finitude.  To know that you are flawed, limited and mortal.  To recognize that some limits are not surpass-able.  To know that everything ends, everything dies, but usually when it comes it is a mercy.  To recognize that things often go bad long before death, how good men are twisted into villains, how institutions forget their original purpose and become self-serving exclusively, how civilizations slump into decadence and rot from the inside, until they die.  To realize that you are part of the problem and that the decline is irreversible.

The Ecstasy/The Blaze/I-Am-Struggle:  The clatter of dice on a table, the fiery burn of liquor down your throat, the heat in your loins when you see her in a slinky dress, the thrill of the hunt, the drum-beat of your heart.  To rail against the boring, mundane, decrepit and old.  To live for the moment, for yourself.  To do as your heart commands and ignore the intercession of logic.  To not just exist, but to live.  To call him and let him know how you really feel; to drive over their, court order be damned, to get your kids back; to take a hammer to his new car; to show those bastards why they won't pick on you, or anyone else, anymore. 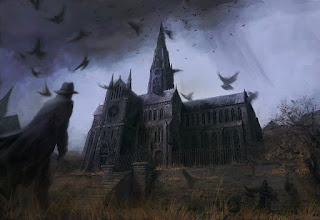 Email ThisBlogThis!Share to TwitterShare to FacebookShare to Pinterest
Labels: Adventuring in the future, OSR