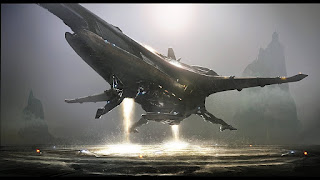 To randomly Generate a Ship, roll on the Tables below.

1d6
1- Shuttles/Airboats.  Also known as Rock-Locked, these are types of ships that are usually only used for orbital or in-atmosphere flight, though they can be used in space.  They never have Emptiness Drives and are usually only used to fly things around in atmosphere or to move things from orbit to surface and vice versa.  The easiest type of ship to fly.
HD: 1d4+1

2- Divers.  Divers are small ships, designed for in-atmosphere flight as well as hard vacuum.  These ships are incredibly fast and agile.  Most void-capable fighter craft are divers.  Some are also sold to the rich as pleasure craft, but due to their small size, most are only suitable to carry 1 to 6 passengers.  They are rarely equipped with Emptiness Drives (10%), but are a favorite for highly mobile professionals and those who need to avoid the law or the Galactic Service.
HD: 1d4+2

3- Skimmers/Skippers.  This ship is the kind favored by poor merchants, the fabulously wealthy and the criminally inclined alike.  Skimmers sometimes have Emptiness Drives (40% of the time), are capable of fast flight and have enough room to carry some cargo and or up to about a hundred souls, depending on the model.  They are called Skimmers because of a trick their pilots often pull by orbiting a planet and "skimming" just above the planet's exosphere, sling-shotting themselves around the planet and gaining a boost in speed.
HD: 1d6+4.

4- Cruisers.  Most mid-range Military vessels are Cruisers.  This is a ship that is about the size of a city block to slightly larger, sufficient to carry several hundred to a thousand souls.  These vessels are slower than Skimmers, but usually make up for it in greater size, toughness and often, firepower.  Cruisers often have Emptiness Drives (50%, 80% if military vessel) and are usually equipped with generous armor and capital-ship weaponry.
HD: 1d8+6

5- Chartist.  Ships of immense size, almost exclusively designed to carry cargo.  Chartist ships are merchant vessels comparable in size to small towns, though crewed by only a tiny fraction of the population of even a minor town.  They are ponderous vessels, known only for their ability to carry large amounts of cargo.  Chartist Ships rarely have Emptiness Drives (5%) and travel almost exclusively through real-space.
HD: 1d10+2

6- Hulks.  Hulks are chunks of metal and stone the size of cities, carrying sometimes up to millions of souls.  A Hulk is its one self-contained society, with whole populations living, breeding and dying within its bulk, sometimes never seeing the outside, not in their whole lives.  Hulks sometimes have Emptiness Drives (30%) but just as often, they are restricted to real-space.
HD: 1d20+4

1d6
1- Platsteel.  Add +1d4 to the Ship's HD, depending on how much you add.
2- Energy Screens.  Reduces the damage of lasers or plasma weapons by 2d10.  Reduces the damage of any explosive or non-kinetic weapon by 2d6.
3- Shields.  Grants the ship a Damage Threshold of anywhere from 4 to 10, depending on how much you spend.  Laser Weapons can pass through the shields without rolling against the Damage Threshold and do damage as normal, but the Ship gains a +4 bonus on its save against the laser shot.  Additionally, while a shield is up, no non-laser weapons can be fired.
4- Point-Defense.  The Captain may parry damage from kinetic or other solid projectile weapons fired against the ship.  Does damage as per lasers.
5- Stealth Tech.  You can't hit what you can't see.  Your ship is particularly hard to see and thus, by the time the enemy realizes they are being fired upon, they're usually already dead.
6- Speed.  Your ship is too fast.  Unless you were attacked when unaware, your enemy must reroll their attack roll and take the worse option, unless they can match your speed.

1d6
1- Cyclonic Torpedoes.  2d8 damage on a hit.  These are special ship-to-ship weapons, designed to rip through shields and hulls alike.
2- Rail Gun.  Do anywhere from 2d10 to 2d20 damage on a hit.  Truly terrible weapons that make mincemeat of planets and ships alike.  Usually only placed on the largest of ships, due to the need for a long track and large amounts of power.
3- Missiles.  Damage depends on the warhead.  These missiles are 1d6 [1= Nuclear Tipped, highly expensive, super illegal for those without proper permits, 1d10 in space, 2d10 in atmosphere; 2= High Explosive, buy in bulk, 1d8 on a hit; 3= Icindiary, try to use before they lock the crew in the medbay and pump the atmosphere out of the rest of the ship, 1d6 + 1d6 fire a round, consumes oxygen; 4= Bio-Chemical, depends on the payload, incredibly dangerous or relatively annoying, 1d6 + payload; 5= Glassware, contains crystals loaded with viruses and scrap code meant to disable computer systems and AIs, 1d6 + access to their systems; 6= Boarding Pods, carry you and your friends inside, 1d4 to the ship, then whatever havoc you wreack is up to you.]
4- Sand Canisters.  The poor man's rail gun.  1d6 damage if at close range, 1d8 at medium range, 1d10 at long range.
5- Lasers.  The poorer man's weapon.  Actually quite effective at most things.  2d6 fire damage.
6- Plasma Cannons.  The rich man's laser.  Not as effective as plasma as when it is used as an infantry weapon, but still quite effective.  3d6 fire damage. 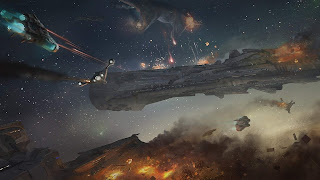 from here
Ship to Ship Combat:
Ships are Monsters, except they can be controlled by the players.

- They get HD from their model and construction
- AC from the helmsman/Captain's skill
- Damage from their weapons
- For Morale and Saving Throws, use the Captain or Helmsman, whoever is in charge at the moment

Secondly, Ship to Ship Combat happens usually at great distance, unless boarding parties are involved.  It is common for Ships to fire upon each other from thousands, if not tens or hundreds of thousands of miles away.  You could be attacked from any direction at any time with no warning, maybe a few seconds at most.

If a Ship is reduced to zero HP or below, consult the Starcraft Critical Damage table.  For every extra point of damage that would reduce the ship below zero, go down one more:

One Damage:
A huge chunk of armor just got ripped away.  The ship's HD is permanently reduced by 1d6.

Two Damage:
That last hit opened up a small hole.  You're leaking atmosphere.  If you don't plug that hole, you're all dead.

Three Damage:
Your communication array is smashed to bits.  You can't send a message to anyone.  The only way for you to communicate would be if they got extremely close and you used the radios embedded in any space suits you might have aboard.

Four Damage:
One of your weapon systems is damaged.  The Referee will roll randomly to determine which one.  The Captain should roll a save.  On a success, it can be fixed.  On a failure, it will need to be totally replaced.

Five Damage:
A fire has started on board.  Oxygen is being rapidly consumed, plus you have all the normal dangers of fire.  And if the flames don't get you, the smoke inhalation will.

Six Damage:
A huge hole is torn into the ship, which starts venting atmosphere.  Depending on the size of the ship, the priority might be to get to a different part of the ship and seal this area off or patching the hole.  Either way, try not to get sucked out into the void.

Seven Damage:
The Engines or thrusters are damaged.  The Ship should immediately reroll its place in the initiative order and other ships have advantage on making attacks against it.

Eight Damage:
The ship's computer core is damage or destroyed.  The Ship has disadvantage on all attack and defense rolls till the damage is repaired.

Nine Damage:
The Engine is damaged, critically so.  It will need to be shut down for lengthy repairs.  If this isn't done, the reactor will explode and take the whole ship with it.  Abandon ship, now.

Ten to Fifteen Damage:
The ship suffers critical damage and is torn in two, a huge hole is punched through it, half of it explodes, etc.  It is nothing more than salvage now.  If you haven't already abandoned ship, you're probably already dead.

Sixteen or More Damage:
The ship is blasted into space-dust.  There's nothing left but a cloud of glowing dust and some scraps of metal. 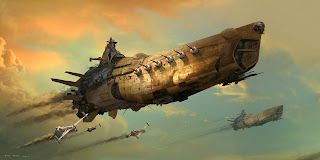