I decided that my Carnivore class, which is my version of the Barbarian, needed a rewrite.  So I did so.  Much of the changes I made are inspired by or lifted wholesale from Ten Foot Polemic's Barbarian Class.  I think this will be an improvement, as the idea of "The Rage Spiral" is truly a great idea. 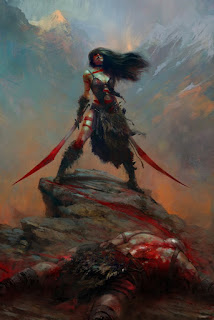 I have not included pre-determined Saving Throws for this class, because I have recently decided to switch to "Under or Equal" Saves.

Rage: As a free action, you can fly into a murderous rage where you are consumed by the desire to make everything alive around you to stop doing that.  While in a Rage you can accumulate Rage Counters.  Rage Counters are acquired by hitting an enemy, which grants you 1 Rage Counter.  If you hit an ally with an attack, either purposefully or accidentally, you lose one Rage counter.  For each Rage Counter you have, you gain a +1 to your Atk bonus and do +1 damage.  Enemies meanwhile gain a bonus equal to the number of Rage Counters you have to hit you.

While in a Rage, you must attack.  Every round you do not, you take 1 COG damage.  If this ever causes you to hit 0 COG, you are permanently consumed by your Rage and proceed to try and kill everything in sight until you die or are otherwise incapacitated.  COG lost like this is restored by 1 point per day spent not raging while adventuring or traveling and by 1d4 points per day spent doing something peaceful, like meditation, prayer, reading or living a quiet, simple life.

To stop Raging you must succeed a COG save with a penalty equal to the number of Rage Counters you have.  This save is a full action or can be attempted for free after killing an enemy.  Once you stop raging, you lose all your Rage Counters.

High Priority Target: As long as you are Raging, Enemies must successfully make a Morale check to target anyone besides you.

All-Consuming: While Raging, you are immune to Charm and Fear spells or abilities, as well as any ability or spell that tries to influence your emotions or behavior.

Opportunity Attack: When Raging, if successfully attacked and damaged, or if an opponent who is in melee combat attempts to leave combat or move past you, you may make an attack against them as a free action.

Bare Chested: Your body is so well developed and the power of your Rage so terrible that these factors work together to shield you.  As long as you aren't wearing armor, you have Natural Armor equal to your CON modifier.  Shields and Helmets don't count as armor.

Unstoppable Force: When you take damage that pushes you below 0 HP forcing you to take a Horrible Wound, unless it is an injury that instantly kills you you may continue fighting as normal, with the only other exception being if the Wound cripples you in some way, such as if the result of taking a specific amount of damage is your hand being cut off.  In that case you cannot use that hand anymore.

Too Angry to Die: The power of your Rage is so great that now it determines when you will die, and not petty things like the laws of reality.  1/Day, if an attack, effect or event would slay you, it simply doesn't.  The only exception to this is an attack that totally disintegrates your body.  If you were Raging when this event occurred, you keep fighting, in spite of what should be a mortal wound.  If you weren't, you stagger back from the door of death and immediately fly into a rage. 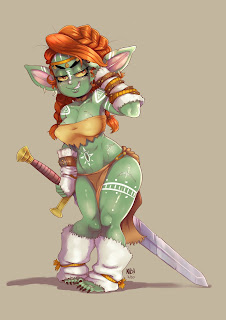