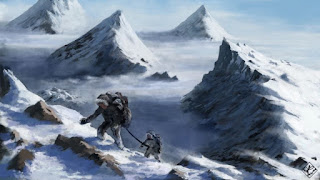 Travel Table
1d6
1-2: Encounter.  Roll on the Encounter sub-Table.
3- Omen.  Roll on the Encounter sub-Table.  You do not encounter the creature, but instead see a sign of that creature.
4- Difficulty.  You have some difficulty on your travels.  Someone has the chance of being bitten by a snake, for example.  Here the difficulties are 1d4 [1= The weather takes a turn for the worse- a storm is approaching; 2= One character must save or fall down into a crevace concealed by the snow; 3= The usual path is blocked, the character must attempt a risky climb or circle back and try another route; 4= Fog or some other factor drops visibility to 30' or less.]
5- Foreshadowing or Hint.  The Referee should provide the players some information about the local area or about their current quest, if they have one.
6- Friendly NPC.  They meet Vira, Daughter of Harz, a Sage who spends her time up her communing with the Elemental spirits. She is an older woman, but an experienced climber and effective guide.  If you seem especially in need or incompetent, or ask, she will show you a safe path out of the mountains.  She can also tell you about 1d3 entries on the Encounter sub-Table (count each Imp as a separate entry).

Encounter sub-Table
1d4
1- Imp.  Roll on the Imp table.  The Imps, if they are in the wilderness or it is dark, usually take their normal forms, but on the roads they take the forms of normal travelers.
2- Wild Beast.  You meet some otherwise normal animals that pose some threat, such as a Snow Leopard, a pack of wolves, etc.
3- Leppalu the Faerie.  He is [1= Hunting; 2= Searching for something; 3= Spying on someone else; 4= Playing some cruel joke on a traveler, such as turning his donkeys into wolves; 4= Watching you.]  There is a 2-in-6 chance he is accompanied, either by one of his sons or his wife, Gryla (50% of each).
4- Gryla the Ogre.  She is 1d4 [1= Hunting or foraging; 2= Collecting firewood; 3= Breaking stuff; 4= Lying in wait.]  There is a 2-in-6 chance she is accompanied by one of her sons or her husband, Leppalu (50% of each).

Traveling through the mountains is hazardous at the best of times, but at night it grows even more dangerous.  At night, up the Danger Level to 3.

Gryla Peak Plot Hooks:
1d8
1- 1d6+1 of the Imps (little brothers) are terrorizing a mountain village.  Drive them off.  If you kill any of them, expect terrible retribution to fall on you.
2- A group of adventurers in town are boasting about a magical treasure, a morningstar called Sunshower that glows in the dark and moves as a dancing weapon.  The weapon is supposedly flying around the mountains and they hope to be the first person to find it.  Secretly, these adventurers are actually some of the Imps in disguise and the "treasure" is created by Galtape.  Following that light will lead to all sorts of natural hazards and potential death.
3- A caravan hoping to pass through the mountains before it is too late in the year asks you to escort them through the mountain passes.  On the way up though, the Imps trap the caravan and torment them for their own purposes, or just their own amusement.
4- Gryla, the Imp's mother, wants to procure wives for her sons.  She will attempt this by kidnapping local women and bringing them to her cave.
5- As above, except Galtape wants to procure strong wives for his brothers, so in disguise, he will attempt to hire adventurers to kidnap powerful female monsters and bring them to him, alive.
6- As above, except Galtape just hires female adventurers and kidnaps them.  You are asked to investigate the whereabouts of these female adventurers.
7- Kerta has been secretly exchanging coded letters with a Necromancer in a nearby city about one assisting the other or vice versa.  When foiling the plans of one, you encounter auxilaries or aid from the other.
8- Attacks by local monsters have grown scarcer recently.  Go investigate what this is.  Apparently, Galtape and the Elder brothers are trying to organize a Conclave of the Night, where all the important regional players (monsters, savage peoples, Servants of Chaos, etc) are planning on gathering to discuss something: an alliance, a coalition, a Crusade against civilization, etc.  Regardless of what is decided, it can't be good.  Infiltrate the Conclave and try to prevent anything from being accomplished.