"What you are, we once were.  What we are, you shall become."

They don't exist.  You don't know anything about them.  You likely will not even see them until it is far too late.  But if you could see them, you would recoil in terror.  They are a sickening hue of palest yellow, covered in bristling hairs, mangy and splattered with blood, mud and other filth, reeking of the wet darkness beneath the earth.  This is the Meenlock, those elusive terrors that haunt the underground.

Meenlocks seek to obtain and capture those who enter the underground, poisoning them and dragging them down into the darkness, never to be seen again.  No one truly knows what they do with those they take, but it can't be good.

Meenlocks are individually frail, so they do not fight their foes directly.  Instead they stalk their prey for great distances, using their natural abilities to plague a target of their choice with hallucinations.  These hallucinations can vary, but they usually portray some as of yet undiscovered threat, betrayed through the sound of nearby footsteps, heavy breathing, the scraping of steel on stone, etc.  The target is tormented with phantom sounds and signs of an enemy, but denied any chance of seeing his pursuer.  The Meenlocks continue this until their target is a weakened, nervous wreck.  If there are other creatures in the area that the Meenlock does not care for, but thinks might be useful, it might also use its powers to drive them toward the target and try to bait them into a confrontation.  It is only when they are certain their target is weak that they strike.

Meenlocks possess razor claws and long mandibles that can easily cut through bare flesh, but their true danger comes from their venom.  Anyone wounded by a Meenlock's grasping claws or piercing maw finds that their strength flees them and their limbs tremble.  With enough of the venom, even the strongest warriors can do little more but cry and beg pathetically as pale, barely-yellow hands drag them down into the dark. 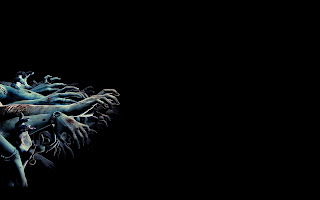 Phantasmal Visions: Meenlocks can cause any creature within 50' that they can perceive to suffer auditory hallucinations of any type the Meenlock wishes.  The usual form these hallucinations take is that of approaching enemies or that of an ally in need of help.

Compulsion: If a Meenlock is within range of a target (as per 'Phantasmal Visions') that has Meenlock venom still in their body, it can instead cause the target to feel the desire to come to the Meenlocks.  The target will begin moving towards the nearest cluster of Meenlocks and will take any appropriate actions to remove obstacles, though they will receive a Saving Throw to avoid hurting their friends.

Shadow Form: Meenlocks can, as a full action, transform themselves into shadows and flit through darkness like birds through the air.  While in shadow form they cannot be hurt by anything other than sunlight, but similarly cannot effect any physical creature or object. Additionally, while a Meenlock in shadow form can move freely in pitch or near darkness, light can push it back.  Any creature with a light source stronger than a candle can prevent a Meenlock from approaching it in shadow form.  Meenlocks can shift out of shadow form as a free action.

Venom: Anyone injured by a Meenlock must save.  On a failure, the creature takes 1d6 STR damage.  On a success, 1 STR damage. If this damage ever reduces someone's STR to 0 they are only capable of small, slow movements (crawling, curling up into a ball, etc).  Anything fast or complex, including attacks, receives a -1 penalty equal to the number of times the Meenlocks have injured this person (max -4).  STR damage done like this is healed at a rate of 1 point per hour.

Tactics:
- Select and stalk a target
- Do everything in your power to weaken that target
- Only strike when certain your target is vulnerable (alone, weakened, tired, etc)

Meenlock Plot Hooks
1d6
1- A powerful monster has taken a group of miners hostage and is demanding tribute from a nearby village in exchange for their release.  However, the monster is too powerful to face head on.  Sneaking into the mine and finding a way to get the miners out would be better.  However, once inside, you will find that the miners are being tormented and kidnapped by something else.
2- A tribe of monsters is menacing a community.  Please go and root them out.  However once you arrive you will find the monster tribe busy engaged in a manhunt for the creatures picking them off one-by-one.  Stay too long and you might find yourself the victim of the same.
3- You are hired to investigate why an important official in a town is acting strangely.  If you investigate properly, you will find out that is because a Doppelganger is impersonating a person in town.  However, if they are discovered, the Doppelganger will tell you that they were only able to replace the person because another monster is holding the original in a cave.  The Doppelganger will then lead you to a Meenlock cave and hope you end up getting eaten by them.
4- A monster with servants (Mind Flayer, Dragon, Lich, etc) has noticed that their slaves keep getting picked off by something it can't sense, which frightens it.  To deal with this, it will contrive a situation to lure some free agents into its lair to have them track down the source of the disappearances.
5- A party of Adventurers recently disappeared, except for one lone survivor.  The night after the survivor is found he rises from his bed and begins returning to the cave where his companions were slain.  If someone attempts to stop him he says, "I need to go home," or "They are waiting for me".  He does not wish to harm anyone, but he will, if they stand in his way.
6- After a small group of Undead ransack a sleeping neighborhood, a cult of Necromancers that has set up near a big city is discovered.  The area around the hills is infested with free-roaming Undead, who attack any intelligent humanoids near them.  If you enter the Cult's lair you will find the Necromancers all slowly going insane from paranoia and fear, suspecting each other of killing the vanished members all the while building more and more elaborate Undead to ensure their own safety and/or scare off the unidentified enemies. 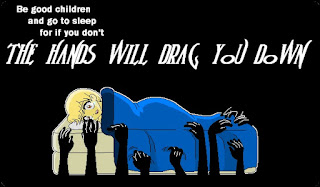