You fill find a cabin in the middle of the woods, despite encountering no signs of people being nearby.  Inside, you will find a fire burning and tea brewing, but no one is home.  Upon further inspection, other things don't seem quite right- there is no food in the kitchen, only tea and salt, the cushions are moth-eaten and there are suspicious slashes in the wood that look like they were caused by knives.  But before you could

They are Ghosts, of a most tragic and vengeful kind.  No ordinary death is suitable to produce one, only the most tragic, horrid or defiling.  Most of the time, the death involves some sort of violation, usually of the sanctity of a home or the laws of hospitality.  The slain is robbed of their life and their blood seeps into the foundations of the house.  Their anguish fills the pipes and their moans of pain and sorrow echo through the halls, often being mistaken for wind or the creaking of old wood.  But do not doubt they are there, and they are angry.

Such Ghosts are known as Hermit Geists, or Poltergeists. 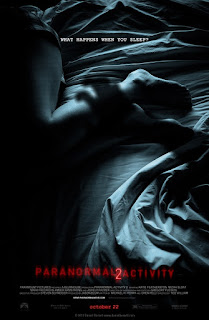 Ghost: A Hermit Geist counts as being Undead.  They can also fly and are intangible, so non-spiritual objects pass through them.  They are immune to damage from non-magical weapons, as well as cold, poison and necrotic damage.

Sunlight Damage: Hermit Geists take 6 damage a round they are exposed to sunlight.

Invisible: Hermit Geists are always invisible.  However, they leave signs of their presence.  These signs can include pockets of cold air, scents, a linger presence, the feeling of being watched, etc.  Additionally, Cats and Dogs can detect a Hermit Geist and they can always be seen in a mirror.

Conditional Immortality: Hermit Geists are bound to an object.  As long as that object is intact, the Ghost cannot truly be killed.  If reduced to 0 HP, a Hermit Geist will return to life the next day at midnight.  The only way to permanently get rid of a Hermit Geist is to destroy the object they are bound to.

Object Control: A Hermit Geist can control any mundane objects inside the dwelling it inhabits as if they were extensions of its' body.  To see how powerful a Hermit Geist is or how many objects it can control, consult the tables below.  A Hermit Geist can also control the fixtures and features of a house that a person should, meaning it can open, close and lock doors, draw blinds or do anything a person could.

Tactics:
- Lure people inside
- Separate them into manageable groups
- Destroy those who pose a real threat to you first
- Keep them away from your "heart"

To customize a Hermit Geist, roll on the tables below:

How strong is this Hermit Geist?

Hermit Geists can simultaneously move a number of objects equal to their HD. 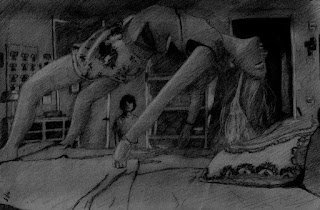 Hermit Geists begin usually in humble dwellings, but as they slay those who enter their homes and drink the life-force from their shattered frames, they grow in power and strength, until their once comfortable domiciles become cramped and stifling. At this point, the Hermit Geist seeks out another like it, a haunted home with no living residents.

You may see such a duel, though it will not look like much.  A cottage on the isolated plain will suddenly be faced by a thatch-roofed bungalow that fell from the sky and assembled itself in seconds, or a yurt will suddenly find an elaborate tent with an attached pavilion fly down from the sky like a dragon of canvas and wooden poles, before assembling itself before the rival's threshold.  The two ghosts will then engage in a contest of wills, a duel testing the depths of the other's hatred and their malice toward the living.  Then, it will be over.  The winner will occupy the other's home and the loser will be forced out into much more humble environs.

This will occur each time the Geist grows too large for its current housing and seeks a better view.

To see what building a Hermit Geist currently inhabits, roll on the table below, adding a bonus to the roll equal to the Hermit Geist's Attack Bonus.

As a Hermit Geist trades up in living space and accumulates notches on it's knife, it gradually loses bits of itself.  What begins as a ghost seeking to avenge itself upon a particular person gradually transforms into a force of concentrated malice, with no real desire but to continue it's bloody spree, carving a covert swath across the world, one broken body at a time.

1d4
1- You fill find a cabin in the middle of the woods, despite encountering no signs of people being nearby.  Inside, you will find a fire burning and tea brewing, but no one is home.  Upon further inspection, other things don't seem quite right- there is no food in the kitchen, only tea and salt, the cushions are moth-eaten and there are suspicious slashes in the wood that look like they were caused by knives.  But before you can seriously consider what this mean, the sharpened, oiled knives hanging on the racks in the kitchen animate and fly right for your throat!
2- A mysterious tower suddenly appeared at the edge of a town.  A group is sent to investigate, but only one returns, claiming that the Witch inside killed the others.  Go and retrieve the witch and bring her here, so she can answer for her crimes.  When she cries that she did not do it, that it was her house, just ignore her.  When the tower disappears a few days later, ignore that as well.
3- A possible Demon cult has been spotted.  However, the members behave strangely.  Instead of performing black rituals, they simply kidnap people and spirit them away, leaving no trace of where the deceased could have gone.  Find out where the cult is taking people.  Secretly, the "cult" is just a group of concerned people whose children are being held hostage by he Hermit Geist, who are placating it with sacrifices.  The leader of the cult is the only genuinely evil one- though he's pretending otherwise.
4- A Necromancer who is famous for devouring the souls of ghosts wants the party to help him locate a legendary Hermit Geist and help him trap it.  The Necromancer, if he devours such a Ghost, would be far more powerful than any wicked man should be. But at the same time, the Hermit Geist will just continue killing if it is left alone.  Can the party neutralize both parties or will one become vastly stronger at the expense of the other?

Email ThisBlogThis!Share to TwitterShare to FacebookShare to Pinterest
Labels: Adventuring in a modern occult setting, Monsters, stolen from Fire on the Velvet Horizon, Undead