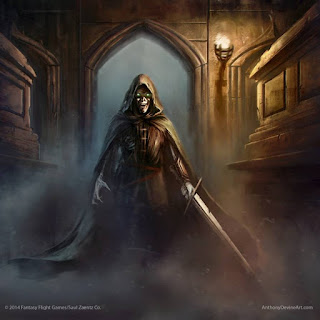 Innate Spellcasting: Wights have 4 Mana Dice.  They can cast the following spells as an action.  These spells do not trigger Chaos or Corruption, but their MD do burn out as normal.  Wights know the spells: Break the Chains, Bloody Feast, Create Servant, Enslave Undead and Explode Undead.

CON damage done by Life Drain is permanent until removed by a spell such as Greater Restoration or the target is blessed by a person granted divine power, such as a Priest, Prophet (Paladin) or King.  After such a blessing is bestowed on the creature, CON returns at a rate of 1 point per day.

Undead Slaves: Wights can control a number of Undead with HD equal to their HD+MD.  These Undead are considered bonded to the Wight permanently and the Wight does not need to spend additional magic to keep control of them, barring outside interference.  Any other Undead the Wight creates are unbound.

Tactics:
- Send your Undead in as cannon fodder, keep your distance
- Attack from range
- Only enter melee combat if a creature is vulnerable
- Use Life Drain to disempower and dissuade those who come after you
- Save 'Explode Undead' in case you need to escape or finish off a tough opponent

Wights are Greater Undead, created from a corpse by summoning a particularly vicious and powerful soul from Sheol, or a lesser Demon.  It makes little difference.  This spirit is allowed to infest a corpse and allowed to torment the lower souls that remain in the body after the higher souls have departed for the afterlife.

This is a surprisingly attractive offer, as it guarantees the right to inflict suffering and a potential to relieve the summoned soul's suffering.  This potential never pans out, but the summoned soul would never admit this fact.  However, this state of affairs does grant a Wight one thing: it cures it of the Undead's traditional suicidal despair and homicidal misery.

By giving it someone(?) to abuse whenever it feels like, the Wight's action and existence is imbued with a certain quality that other Undead lack.  Rather than feel like it's existence is empty and hollow, causing the Undead to seek its own destruction, the Wight understands that by subjugating these souls to it, it is special.  This allows the Wight to stave off the desire to walk into the sunlight or an adventurer's sword.

Instead, a Wight's attention turns outward, to the world.  For even though its appetite for cruelty has been whetted, it still has the Undead desire to enslave and destroy.  However, instead of being a means toward self-destruction, these impulses are now exalted and glorified for their own sake.  Wights create Undead, slay the living and torment their enemies under various pretexts, but these are all in service of the Wight's rapacious, sadistic appetites.

Wights are, of course, aware of this fact.  They are not deluded.  They may pretend to be seeking some other goal, but this is their true desire.  The various pretexts they work under may be believable, such as when a Wight is serving under some greater evil that allows it to carry out its agenda, such as a Necromancer, Wraith or Hag, or or they may be transparent and hollow.  The Wight may discard them as needed, or it may keep them around as a cruel form of mockery.  For example, the Wight claims it is only doing this to get the justice it was denied in life as it carries out atrocities on unsuspecting civilians. 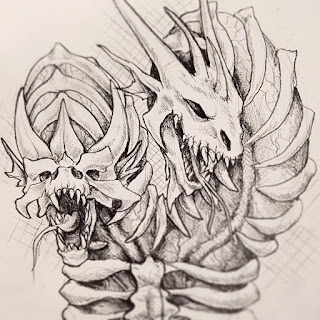 Already Dead: Unless decapitated, cut to pieces, burnt to ashes by sunlight or reduced to zero HP by a magical attack or weapon, the Undead has an X-in-8 chance of their body knitting itself back together and recovering from the damage they took, where X is equal to the number of HD they have.

Separate HD: The Heads and Necks of the Boneyard Hydra have their own HD.  Destroying or damaging them does not damage the main body.  However, area of effects abilities or spells can affect both heads and body at the same time.

Tactics:
- Leverage the heads effectively
- Work together to exploit the different abilities each head has
- Gang up on one or two enemies
- Retreat if you lose half or more of your heads

To customize a Boneyard Hydra, roll on the tables below:

How many heads does it have?

How well protected are the necks?

1d4
1- Well, the necks are armored.  They have [7 Armor].
2- Moderately, the necks are reinforced with extra bone.  They have [6 Armor].
3- Badly, the necks are armored but the armor is damaged.  The necks have [10 Armor] but if you could damage the armor, it would fall apart or have its effectiveness greatly reduced.
4- Unarmored, but the Boneyard Hydra's necks are not made of exclusively bone, but flesh and muscle preserved with necromantic energy. This makes them faster and more agile.  The necks count as having a +2 bonus to any Defense roll.

Boneyard Hydras are often the apex of any Necromancer's creative process, as well as their mightiest defenders.  As such, they are often loaded down with extra abilities.  As such, roll X times on the following table, where X is the number of heads.

What other powers does this Boneyard Hydra have?

1d20
1- This head can spew out a swarm of flesh-eating beetles onto someone.  This only happens once.
2- This head can exhale clouds of freezing arcane fire.  The fire strikes everyone in a 10' line from the head, doing 2d6 cold damage, save for half.
3- This head can exhale a foul-smelling cloud of gas.  This gas 1d3 [1= Does 1d6 damage per round spent inside it; 2= Forces you to save or lose your turn as you choke; 3= Does CON damage per round in the cloud, if this reduces you to 0 you die.]  The head can only produce this cloud once.
4- This head has venomous fangs.  Upon a hit, it injects venom into them.  This venom 1d4 [1= Inflicts a -1d4 penalty to attacks; 2= Causes agonizing pain, save to do anything but spasm and scream on your turn; 3= Take 3d6 damage over the course of 3 rounds, 1d6 per round, you can save each turn to prevent additional damage; 4= Save or die.]
5- This head can detach itself from the neck on a successful bite attack and clamp onto someone.  This halves their DEX and Atk bonus until the head is removed.  Once the head does that the neck becomes a tentacle that makes 1d8 slam attacks.
6- This head has a neck long enough to encircle someone and grapple them.  This takes a successful STR check.
7- This head has hypnotic eyes that cause enemies to freeze up when they see it.  Enemies who look at the Boneyard Hydra while this head is alive must save or freeze.  Predator-type Humanoids (Crocodiles, Wolfmen, Coyoons, Morcai, etc) make this save with advantage.
8- This head can fire a cloud of 1d4 [1= Teeth; 2= Needles; 3= Shards of stone and metal; 4= Arrowheads] that does 3d6 damage on to everyone in a 15' cone, save for half.  If you have a shield, save to take no damage.  The head can do this once.
9- This head carries a sword between its teeth that it uses to parry attacks against the other necks or itself, reducing damage by 1d8.  It can only parry one attack a round.
10- This head can communicate telepathically and it is constantly blasting everyone around it with constant screaming, pleading and maniacal laughter.  Anyone who can hear must save.  On a failure, they are frightened and take 1d6 COG damage a round.  If this reduces someone to 0 COG, they will flee for their lives or hide from the creature.
11- This head is larger than the others.  It has +2 HD.
12- This head has +4 armor.
13- This head is full of fluid sacks.  Anyone who injuries or destroys this head is splattered in 1d3 [1= Festering blood and guts, save vs disease; 2= Acid, this destroys the head but does 2d6 damage, save for half.  The acid also destroys non-magical armor and shields; 3= Glowing paint, -4 to stealth until you wash it off.]
14- This head is magnetic.  All attacks made with metal weapon get +4 to hit it but get stuck to it, you must succeed a STR check to pull them loose.
15- This head has a long, flexible tongue that can grab things.  The Boneyard Hydra will use this to snatch items or weapons from your hand.  Succeed on a STR save to resist.
16- This head has suckers in its mouth that can drain life force through.  The mouth automatically grapples anyone it bites.  That creatures takes an additional 1d6 necrotic damage and the Boneyard Hydra recovers that much HP.
17- This head can vomit up flammable goo to cover 1 creature.  Creatures with shields or incredible speed may save to avoid being splattered, otherwise none is permitted.  The creature can vomit flammable goo every 1d4 rounds.  The goo cannot be washed off except with large amounts of water, and is sticky.
18- This head can electrocute people it bites.  The mouth automatically grapples anyone it bites.  That creatures takes an additional 1d6 lightning damage a round and is paralyzed until they succeed a STR save to break free.
19- This head has horrible bacteria growing in its mouth.  Anyone bitten by this must make a save vs disease with disadvantage.
20- This head has eyes all over it.  It doesn't attack, but instead watches 360 degrees around the Boneyard Hydra.  This gives it +4 to spot creatures sneaking up on it and +2 armor as long as this head is alive.  While this head is attached, the Boneyard Hydra makes all saves vs blindness at disadvantage.

Boneyard Hydras are unique creations among some Necromancers- terrible bodyguards and horrible roadblocks to prevent those who would prefer them to be resting in the dirt instead of on silk sheets.  Boneyard Hydras resemble humanoid skeletons or zombies, but instead of arms and a single head, sprouting from where their necks and arm sockets are forests of spinal cords, each one topped with a laughing skull or rotting face, eyes burning with unholy fire.

They are created in the following way:

First, you'll need a large body.  An Ogre is preferable, but a large man will sometimes work.  Then, take off the head and the arms.  Replace the arms with spinal cords and install heads on the end.  Do the same with where the singular head remains.  Then, bind some souls to each of the heads.  Sometimes lesser souls are capable of filling this role, but summoning weaker souls from the netherworld is also said to be effective, especially if you want a more powerful Hydra.

If you have done everything right, you will have a terrifying bodyguard.  If you have not, you will likely not survive as the Hydra will rip you apart, or the souls within it will be so busy struggling against each other that they will tear each apart, leaving you with a bunch of broken bones and a bunch of wasted effort. 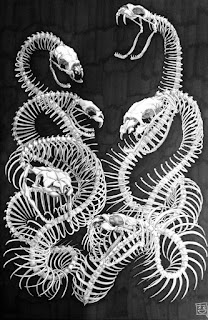