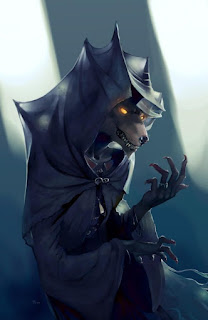 Bluster Platoon is a group of Yugoloths who specialize in negotiation, resource management and other support roles.  They are talkers, not fighters, hence the name of their Platoon.  The other Yugoloths sometimes refer to them as "Blusterers", as they tend to talk big but rarely try to prove their strength, as unlike other Yugoloths, they are not a proud bunch and will flee from danger with no hesitation.

Bluster Platoon is composed of Arcanoloths, the batch of Yugoloths who seemed to have a unique talent for mortal sorcery, as well as some of the natural magicks of their peculiar race.

Arcanoloths look like Foxes and this is for good reason- they were taught and raised by a Green Hag named Lola Sugarplum, but she did not give birth to them- the Hag instead used a surrogate in the form of a Kitsune, a Spirit and servant to the Gods.  As such, they inherited the natural talent for magic that kitsunes have, along with their fox cleverness.

However, while using a Kitsune's womb enabled Sugarplum to produce a group of powerful servants, but it rapidly caught up to her, as the Kitsune was also a concubine of the West Wind.  When he found out what his woman had been used for, he turned the Hag into a goat and had her given to an orphanage, where she was butchered and eaten.

The Arcanoloths did not shed any tears over their "Mother's" passing and instead focused on what to do with the Book that had their secret names in it.  Their first thought was to destroy it, but as creatures raised by Hags, they all had been groomed to desire power over others and dominate them.  As such, most of them had some desire to reign over their brethren.  So they could not bring themselves to destroy the book.  Instead, they concealed it, in the home base of the meanest creature they could find, ie in some kind of horrible dungeon.

They don't trust each other though- so they take shifts monitoring the Book's location while trying to come up with a plot to take the Book for themselves.  When they are not on duty there, they spend their time traveling the world, gathering knowledge and power for themselves or their employers.  And they are not picky on who they work for- with their extensive amounts of knowledge and magical abilities, they can perform many tasks.  As such, the members of Bluster Platoon find work as negotiators, lawyers, orators, spies and magical power-house.

And thanks to their ability to shape-shift, they are very good at hiding in plain sight.  So that might just be a sharp-eyed new scribe the King hired, or it might be something far more powerful than a well-read man.

Bluster Platoon's members prefer to be paid in magical items or power (spells, chunks or whole souls) but they will also accept gold and jewels. 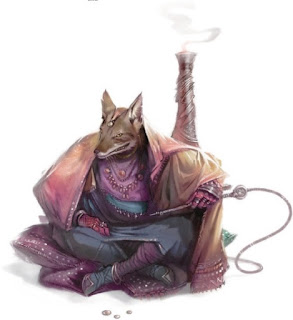 Base Arcanoloth Statblock:
HD 3
AR none
Atk Claws (1d4 + 2d6 poison on a hit, save for half) or Spell
Mor 9
Saves 10 or less is a success
Immune to Poison and Poison Damage

Shapeshifter: Arcanoloths can, as an action, alter their appearance to take on any humanoid form, either one they have seen or imagined.  This transformation does not affect the stats or ability scores of the Arcanoloth.

Spellcaster: Arcanoloths have 7 Mana Dice.  Their MD burn out on a 5 or 6 and trigger Chaos on a roll of doubles or triples.  They ordinarily have the spells Anti-Gravity, Chromatic Orb, Dimension Door, Mage Armor, Magic Missile, Mirror Image, Polymorph and Wall of Force prepared.

Chaos of the Arcanoloth:
1d6
1- One random creature starts coughing.  He loses his next action as he pukes up 1d6 snails, 1d4 snakes and 1d3 dog tails.
2- A skull suddenly appears and starts whispering.  Only one of the player characters can hear it.
3- A random animal nearby swells like a balloon, before exploding into a shower of gore.
4- The ground for 30' around the Arcanoloth transforms into a patch of peat bog.
5- A dense, foul-smelling fog rolls in and fills the area around the Arcanoloth for 100'.  Visibility drops to nothing, you can see 10' in front of you and no more.
6- Everyone within 50' of the Arcanoloth must save, including the Arcanoloth.  Those that fail their save lose their action and spend it cackling, howling with laughter at an unsaid joke.

Tactics:
- Use your magic to protect yourself
- Let others take the risks
- Only fight if you have to

Bluster Platoon has no real leadership, the whole group is fractured into many small cliques, duos and trios that do not usually interact.  None of the members trust each other much, and so they do not work together usually, and certainly they do not have any sort of formalized chain of command.

However, that's not to say that they are all equals.  Among their numbers, the one who is most suited to lead is probably Simitz Silvertongue.  Simitz is a charming fellow, with the ability to talk his way out of almost any situation.  Unlike other Arcanoloths, he does not use his shape-shifting abilities except when he is hiding, constantly taking on his true, fox-like form.  He does this to prove his honesty.  He also does not lie, as he will tell you.  This does not mean he doesn't deceive, far from it.  But he will not tell bold-faced lies.

That being said, Simitz is a manipulator in the extreme.  He is a skilled and talented negotiator, skilled in twisting his opponents word's and turning the tables on them.  Simitz is not a trustworthy fellow, despite all his efforts to appear otherwise.  And many who have gone against him say the same- do not trust Simitz Silvertongue.  But Simitz is also aware of this, and so structures and frames any discuss into being one that he can benefit from.  He does not fight a battle he does not believe he can win, nor does he take the losing side in any situation.  And he always has leverage.  So even if you know he's manipulating you, it won't matter.  It's his game, and he's very good at it.  The house always wins, after all.

Weakness: Simitz is clever and smart, but he's not much for improvising.  He only acts when he holds all the cards and avoids any situation where he doesn't.  So if you manage to pull a fast one on him or radically alter the current situation, he will either retreat or be thrown off his game until he manages to regroup.

Note: Simitz uses a variant of Flesh to Stone that turns his enemies into tin instead.

While Simitz does his best to present himself as transparent as a display of confidence, to intimidate the weak and be underestimated by the strong, his method is the rarer.  The more common tactic by members of Bluster Platoon is to lie selectively, but to stick close to the truth as much as possible.

One who takes this action to its extreme is Laxu.  Laxu believes that the best method of negotiation and deception is that of the lycanthrope- to change forms depending on the situation but keep your core intact.  What Laxu does is he adopts the role of an actor and projects an image of himself.  Depending on how he wishes to be seen, he will adopt that persona and pretend to be it in person.  Then, when his enemies spend their time chasing shadows, he will take what he reeally desires.

Laxu is the closest thing that Bluster Platoon has to a leader, although only for about a third of the platoon.  Some of the others feel he is too stuck-up and arrogant, or that he is clownish and brash.  This, of course, is not how he actually acts, but simply how he wants them to think he acts.

Weakness: Laxu is used to running circles around his opponents, who rarely understand what he is trying to do.  Even after he has tricked them, they rarely get it.  So he's surprisingly easy to trick, if you don't play his game.  But if you do, good luck beating him.

Jolo the Hellkite is a radical member of the Platoon.  Rather than follow the lead of his peers and study law, history and religion to become a skilled negotiator or administrator, he sought a more direct use of his talents.  Jolo doesn't want to help others achieve power and be the power behind the throne.  He doesn't even want power.  Or at least, not the type that would have him sitting on a high-backed chair listening to people complain.

Jolo loves war- the smell of fear, the stench of blood and mud and death is an intoxicating musk.  The sound of clashing metal, splinter bone and agonized screams is music to his ears.  As such, Jolo has taken on the role of a free-booting mercenary, traveling to wherever there is an ongoing conflict and joining whatever side stands to give him the most.  Sometimes he joins openly, but normally he assumes the identity of a common soldier, fighting with spear and bow.  He only unleashes his full and terrible powers when he feels it necessary.  These sights can be terrible, as unlike his brothers, Jolo is almost exclusively trainined in combat magic.

But after unleashing his powers like that, Jolo usually has to move fast.  Sometimes his allies turn on him, thinking him some kind of demon that crept into their ranks.  Other times, allied command takes notice and starts trying to use him.  Jolo might play along for a bit, but the second he thinks that his leash is getting too short, he will vanish into the night.  Still other times, enemy command will be alerted to his presence and they will dispatch either elite troops or hire foreign mercenaries of their own to do battle against him.  None of these situations are ideal, and so usually they are the sign to Jolo that he should be leaving.

Weakness: Jolo is no coward, but he is not brave.  Bold, yes, but not brave.  He does not want to die.  He loves to fight but when confronted with a dangerous situation that he feels is too risky, he will avoid it.  Discretion is the better part of valor, and Jolo has not survived this long by being reckless.  If it seems like a trap, or just a bad idea, he won't go. 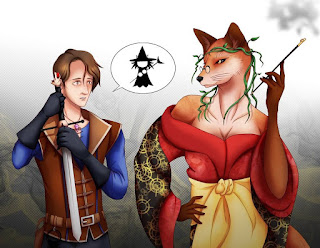