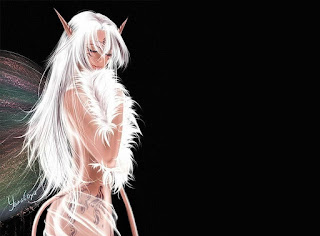 I have written about the Yugoloths before.  See here for the basic information on where they come from, along with the details on a unit of their Shock Troops named Shiver Squad.

Named for the Second Month of the year, the Gelid Squad are an all female team, the sisters to the other (primarily) male Yugoloths.  And because irony was not something they were every taught, Gelid Squad was trained by their Hag Mothers as agents trained in silk-work, assassination and espionage.  They work in subtle ways, unlike their brothers, gathering information and eliminating targets that could be harmful to their interests.

Gelid Squad is composed of Eroloths, shapeshifters who can take on any humanoid form.  As such, Eroloths usually disguise themselves as beautiful women or naive young men.  They can take other forms though, such as an older man, a spinster, a child or a large family pet.

Eroloths also have preferred forms that they take whenever they are certain no one is looking.  These forms are usually a mash-up of various different forms, such as a beautiful woman's body with tentacles where her nipples should be as well as a lobster claw instead of her right hand and the head of a lion.

When fighting, however, Eroloths use their natural shapeshifting to their advantage, creating natural weapons such as claws, pincers and stingers from their limbs to attack their opponents.  Eroloths can also use their abilities to give themselves gills to breath underwater, wings to fly through the air or shrink down to fit through tight spaces.

Also, a note.  Gelid Squad does not wear armor, as they are able to use their natural magicks to harden their flesh to the toughness of oak wood.  Furthermore, armor would impede their ability to shapeshift.  For this reason, they usually do not wear clothes either- instead altering the appearance and nature of their skin to make it appear like they are wearing clothes.  So if you rip the sexy barmaid's dress and she breaks down crying or makes a blood-curdling threat while clenching her fists and trying not to cry out, you know why.

Gelid Squad is composed of 22 members.

They prefer to be paid in valuable information, magical trinkets and debts, promises or obligations of future service.  They will also accept the souls of the living and the dead.

Their Mother is a Night Hag named Mirthful Maria.  Her current whereabouts are unknown.  Secretly, she is hiding out in a major city under an assumed identity, pretending to be a reclusive widow who went insane after her husband died and rarely leaves the grounds of her sprawling estate.  She is plotting to reclaim her Daughters, but so far has been thwarted.

Gelid Squad's book has fallen into the hands of an unknown master, who is using them for their new master's sinister ends.

Shapeshifter: Eroloths can, as an action, alter their appearance to take on any humanoid form, either one they have seen or imagined.  They can also transform into another creature that is the same size as an Eroloth.  They could not transform into a house cat, but one could transform into a Lynx (assuming she weighed around 60 lbs).  This transformation does not affect the stats or ability scores of the Eroloth.

Innate Spellcasting: Eroloths have 4 Mana Dice.  They can cast the following spells as an action.  These spells do not trigger Chaos or Corruption, but their MD do burn out as normal.  Note that "At-Will" spells can be cast for free as Level 1 spells, or can have their power enhanced by spending more MD.  However, in the latter case, such MD will burn out as normal on a 5 or 6.
At-Will: Alter Self, Darkness, Invisibility
3/Day: Charm Person, Silence

Tactics:
- Pretend to be friendly or helpless, avoiding fighting if at all possible
- The best way to fight enemies is to get others to fight them or take them out using poison or booby-traps
- If you must fight, attack using ambushes and hit-and-run tactics
- Flee from serious resistance 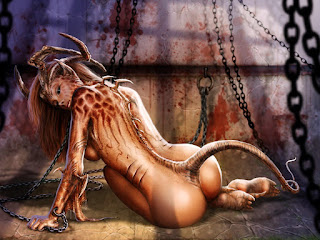 Daphne was once the undisputed mistress of Gelid squad.  She was cruel and ruthless, prideful and domineering.  The others feared and respected her as their Lady, and none even entertained the thought of rebelling.  And while she wasn't particularly well liked, she did not compell their service.  She instead seduced them with her honeyed words and superficial charm.  In time, the other members of Gelid Squad came to recognize that Lasciel wasn't the wise leader she portrayed herself or perhaps even believed herself to be.

As such, they are torn on whether they want to assist her in trying to overthrow their new master, as that would likely mean her being restored to her former position of leadership over them, and having to endure her petulant rages and sulking whenever her pride was injured.

Weakness: Daphne is proud.  She cannot tolerate insults to her mannerisms, intelligence or leadership.  She believes herself to be a wise and just leader, as well as the most competent of the Eroloths.  Those who refuse to go along with her delusion rapidly find themselves at the bottom of the totem pole in any organization that she has control over, such as the squad.

Blistering Cloud: Daphne has the power to transform into a cloud of poisonous fog that covers an area of up to 30' square feet and 10' off the ground.  Anyone in this cloud suffers the effects of the Eroloth's poisonous stingers.  While in this form, Daphne can only move at a speed of 10' a turn and cannot be harmed by anything that could not hurt a cloud.  She can transform back and forth as an action. 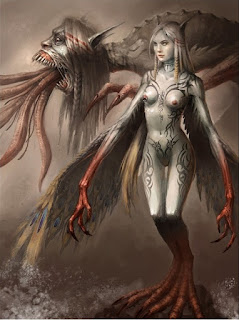 Sierra was and is Daphne's rival for the throne.  She was always angered by Daphne's cruel treatment of her sisters and made several attempts to defeat Daphne and take the throne from her.  All of these failed as while Sierra seems to mean well, she is just as corrupt as Daphne and obsessed with the pursuit of power.  Her seductions are crude and blunt, a mark of disfavor in the eyes of the other Eroloths.  Additionally, because of her blind lust for power and delusions of grandeur, Sierra is just as often manipulated as manipulator.

Sierra is currently largely free of restriction, as their new master knows that she can be easily manipulated, if only one knows her weaknesses.  However, they do not trust Sierra, and for good reason.

Weakness: Sierra is obsessed with taking command of the Gelid Squad and obtaining power for herself.  She has ambitions far beyond the squad, as well as her own abilities.  She could be easily seduced by promises of power, of parades and statues to her grandeur.  She wants to wear the crown, to rule over her own kingdom, if not the whole world.

However, despite the fact that she can be manipulated easily, do not mistake her obsequience for loyalty.  She has no honor and would slit your throat for a cup of tea. 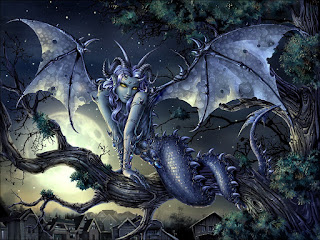 Vulkana is easily the strongest of the Eroloths- in terms of physical and magical power, she is a prodigy.  However, due to the nature of the officers of Gelid Squad, catty, status-obsessed and endlessly vengeful, she conceals this power unless absolutely necessary.  Approximately half of the squad knows about Vulkana's true power, but they are helping her conceal it. In truth, it is an open secret which Daphne has been pretending she does not know.  Sierra genuinely has no clue however, she just knows that Vulkana is well-liked but not a threat to her quest for the crown.

Vulkana has managed to escape her new master's notice, though they have noticed her competence.  Still, being lucky and loyal is an act she is very good at and it highly unlikely she would break character now.

To hide her power, as well as the true nature of her power, Vulkana takes on a very Dragon-like appearance, and makes sure to pepper her speech with references to fire, warmth and heat.

Weakness: Vulkana thinks of herself as the refuge that her sisters flee to.  She is always eager to help, but she is a bit proud and is unlikely to ask for help.  As such, she could easily get in over her head by walking into a situation much more dangerous than she first imagined.

Innate Spellcasting: Vulkana has 6 Mana Dice.  She can cast the following spells as an action.  These spells do not trigger Chaos or Corruption, but her MD do burn out as normal.  Note that "At-Will" spells can be cast for free as Level 1 spells, or can have their power enhanced by spending more MD.  However, in the latter case, such MD will burn out as normal on a 5 or 6.
At-Will: Alter Self, Darkness, Incapacitating Grip, Invisibility
3/Day: Charm Person, Silence, Witch Bolt
1/Day: Defribulate, Thunderous Smite*

Altered Venom: Vulkana's venom does not cause agony, but instead is a metal-infused substance that is naturally sweated out through the pores.  However, this substance then coats the skin, making that creature take +1d6 damage from sources that deal lightning damage.  This effect stacks.  The only way to remove this effect is to take any amount of acid damage or thoroughly wash yourself.

*Vulkana's version of Thunderous Smite is a mutant spell that does lightning instead of thunder damage. 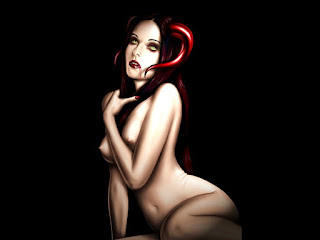