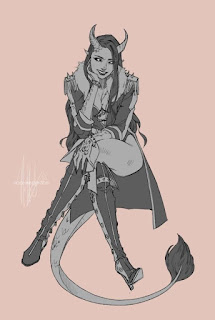 Outsiders don't have bodies of their own.  They can only enter our universe by being summoned or by slipping through a hole in the fabric of reality.  Once here, they then must take residence in a body in order to remain for more than a few minutes. But once here, they can stick around for a good, long time.

Additionally, while an Outsider is in control of a Host Body, it generally has total control over it.  It can change the shape and appearance of the body and manually adjust all physiological processes by meddling in the brain stem and local nerve endings, or by using its abundance of mana and converting that mana into extra skin, bone or muscle cells.  This is why Outsiders (and Wizards) can treat the law of the conservation of mass like a suggestion.

Mommy, where do babies come from?

Outsiders are pure spirit.  When not in our world, they dwell in Deep Heaven, the psychic world where thought and action are one and the same.  In Deep Heaven, a painful memory as solid as difficult terrain, and moving through it is like walking across a beach littered with sharp shells while barefoot.  Similarly, the memory of a mother's hug after a long absence is as delicious as fluffy yellow cake with cream cheese icing.  They do not perceive the world through sense data as we do.

So when an Outsider enters a physical body, it's usually a shocking experience.  It's intoxicating to them.  Only the truly introspective or someone who has never felt warm sunlight on their skin can truly appreciate how miraculous it is.  The boundless joy of physical existence crashes down on them in these moments and for some, it is too much.  Sometimes, they go a little mad.

This is why the possessed are often so, weird, because the spirit possessing them has never experienced anything like this. Stealing all the barbeque skewers and hiding in a fabric shop doesn't seem like a good idea to a common criminal, but to the Outsider possessing this man, these skewers carry the most delicious food they have ever tasted.

As such, Outsiders who do enter our universe tend to do two things: they either restrain themselves from indulging any of the new desires bubbling up from their host's body, or they give in and go buck wild.

Note: Besides morality, this is also one of the distinctions between Angels, Demons and Spirits.

This post mostly concerns itself with the latter type.  Because if barbecue is enough to drive an Outsider into a fit of passion, then sex, which is often a hugely important thing for normal mortals, is world-shattering.  To them, it is incredibly addicting, even more so than with normal mortals.  And as we all know, the human talent for perversion is boundless.  So for creatures who cannot even fathom the idea, they often end up being lambs to the slaughter when it comes to such things.

As such, most Outsiders who come to our universe (who know about it) are terrified of sex, reproduction and anything even vaguely assoicated it and will avoid it or even mentions of it, though they would likely never admit this.

But for those that don't avoid it, sometimes they end up getting knocked up.  Outsiders who take on a male form tend not to produce special offspring unless they go out of their way too.  More often, female Outsiders end up taking female forms and end up being seduced by their new found bodies.  And when these Outsiders do escape from this responsibility, usually by vacating the body, any child that develops from such a relationship is born with an extra inheritance. 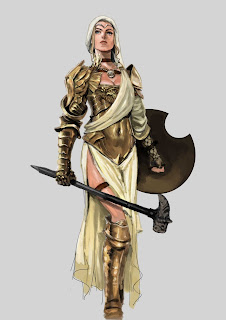 First, select a pre-existing race.  This is the child's biological base.  You may tweak this existing base, giving your character uniquely colored skin, fur or hair, horns, claws, extra teeth, limbs, scales when they should have fur, or other changes that are only cosmetic if you wish.  You also go a bit crazier, such as giving them a pharyngeal jaw, translucent skin or whatever you prefer.

Second, roll on the appropriate tables below for your ability and weakness.  Alternatively, you may choose to replace one of these results with the normal ability or weakness of your biological race.

1d20
1- You can transform up to a bucketful of liquid into 1d4 [1= Clean water; 2= Strong alcohol; 3= Lamp oil (flammable); 4= Blood.]
2- As an action, you can change how your voice sounds to mimic the voice of anyone you've ever heard.
3- You can create small fires (as a candle) by blowing on something as an action.  This can only ignite something that could light on fire if you held a candle up under it.
4- You can alter the color and length of your hair or fur as an action.
5- You have venomous fangs that, if they stab into someone, do 1d4 [1= 1d6+[CON modifier] poison damage; 2= Force that creature to save, on a failure, it is paralyzed for 1 minute; 3= Cause agonizing pain, giving a -1d4 modifier to any precise action or attacks; 4= Force the creature to save, on a failure they begin suffering from a violent seizure for 1 minute.]
6- You have natural weapons in addition to any you may already have.  You have 1d6 [1= Claws; 2= Long Fangs; 3= Spikes on your tail (you also have a tail, even if your race usually doesn't); 4= Barbed spurs on your (1= Ankles; 2= Wrists; 3= Elbows; 4= Knees); 5= Horns; 6= One of your hands is replaced with a large, lobster-like claw or a muscular tentacle.]  Wjhatever it's shape, these natural weapons do 1d6+STR damage.
7- You have resistance (take half damage from) to one form of elemental damage.  This form of damage is 1d10 [1= Fire; 2= Ice; 3= Lightning; 4= Thunder; 5= Acid; 6= Poison; 7= Radiant; 8= Necrotic; 9- Force; 10= Psychic.]
8- You can predict the weather 1/Day with 100% accuracy.
9- You can levitate up to 30' into the air if you sit cross-legged and focus for a least a round.  You can then move up to 10' up or forwards.  You can hover for as long as you want, as long as you don't do anything else or lose your concentration.
10- One of your senses is enhanced.  You get a +2 bonus to perceive anything with that sense.
11- You have one special sense.  Roll on this table here.
12- You can diagnose illnesses with a touch and identify any poison someone is afflicted with by touching them.
13- You can speak with 1d4 [1= Dead; 2= Plants; 3= Animals; 4= Other mortals you don't share a language with] as if you shared a language with them.
14- You can sense the presence of 1dX [1= Undead; 2= Constructs; 3= Wizards or Sages with magical power; 4= Outsiders; 5= Dragons; 6= The Servants of Chaos or the Agents of Law (50% for each- only take the first roll)] if they are within 1*[CHA modifier] miles of you.  The closer you are, you more accurate your perception of their location, direction and speed of movement towards or away from you is.
15- You can, 1/Day, 1d4 [1= Cause food to spoil; 2= Make water undrinkable; 3= Create a weak point in an object; 4= Cause someone within 30' to suddenly have a headache, sneezing fit, or strange itches all over their body.]
16- You can absorb the writing from documents or books by touching them.  The writing on those documents appears on your skin as tattoos.  You can transfer it back by touching a blank document.
17- You start with 1 Mana Dice and the ability to cast spells.  You know 1 spell which you can cast innately.
18- Your blood and bodily fluids can 1d6 [1= Purify food and drink; 2= Function as a powerful painkiller; 3= Make people who consume or are exposed to them sleepy; 4= Cause hallucinations; 5= Burn like acid; 6= Are flammable.]
19- 1/Day, you can clean or repair an object that weighs less than 5 pounds, takes up less than 5' cubed or is worth less than a week's wage for a poor laborer.
20- You can sense what is touching a surface, as well as vibrations (footsteps, hooves, running engines) within 10*COG modifier, by pressing your ear to the surface and listening for at least a round.

1d12
1- You cause omens of bad luck around you such as black cats, broken mirrors, spilled salt, etc.  Prophets receive (false?) omens of doom and forsee you are the culprit responsible for the coming tragedy.
2- You attract the attentions of Outsiders, who will try to enlist you in their schemes in the mortal world.  The Outsiders will send you dreams and their mortal followers to try and influence you into doing their bidding.
3- You attract 1d10 [1= Undead; 2= Wizards and Sages; 3= The enemies of your Outsider parent (mortal or otherwise); 4= Insects; 5= Vermin; 6= Dangerous Beasts; 7= Criminals; 8= Madmen 9= A type of creature that you have never seen before; 10= Invisible monsters that only you can see.  They aren't immediately hostile, but you don't know what they want.]
4- You have the desire to eat 1d4 [1= Sinners; 2= Royalty; 3= Innocents; 4= Strong warriors.]  Every time you have the chance to do so, you must save to resist.
5- You have a powerful compulsion to 1d6 [1= Raise hell and cause chaos; 2= Steal; 3= Right wrongs and punish the wicked; 4= Aid the oppressed and downtrodden; 5= Set things on fire; 6= Destroy things you believe to be corrupt or broken beyond repair.]  Every time the opportunity to exercise one of these compulsions comes up, you must save to resist indulging it.
6- Your bodily fluids are addictive and can be absorbed through the skin or other tissues.  Anyone who is exposed to them must save.  On a failed save, they become obsessed with consuming them once more.
7- You cannot disguise yourself.  People always sense that you are different and once someone knows you, they can never mistake you for someone else.
8- People continually mistake you for 1d4 [1= A messiah-figure; 2= A local official who is (1= Widely beloved; 2= Despised; 3= Believed to be a traitor by his own ethnic/religious group; 4= Corrupt); 3= A famous outlaw; 4= An evil spirit in disguise (you resemble one of the evil spirits in their religion).]
9- You suffer from hallucinations.  These hallucinations are 1d6 [1= Auditory hallucinations, all false; 2= Visions, all false; 3= Auditory hallucinations, 50% true, 50% false; 4= Visions, 50% true and 50% false; 5= Your hand scribbles words into the dirt or dust next to you, messages extremely cryptic and borderline useless; 6= You randomly regurgitate items (20% each morning) that provide some vague but true clue about the immediate future.]
10- You can only eat 1d6 [1= Stolen Food; 2= Raw meat and blood; 3= Meat of any variety; 4= Plants; 5= Light and heat; 6= Gold, silver and other precious metals.  Jewels are tasty but not filling to you.]
11- You have the worst luck.  Whenever you roll a natural "1", the worst potential outcome happens.
12- You start with a random mutation.  Your Referee should roll on his or her favorite table. 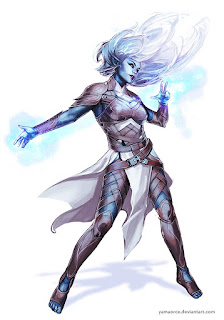