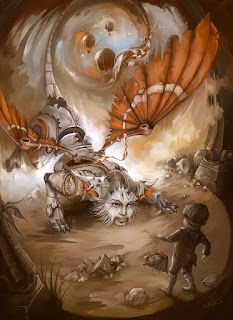 The rivalry between Giants and Dragons is famous, immortalized in myth and legend.  The Dragons through the sky, unleashing a rainbow of death upon their foes, a flood of acid and fire and everything else, while the Giants stand in ordered ranks, their colors regimented and organized, proud and resolute in the face of Chaos.

And it is true that there is a deep animus between those two races.  But the true mirror of the Dragon has always been the Sphinx.

Dragons are the exemplars of Chaos, respecting no laws and doing as they wish, with similarly little regard for custom, tradition or even the feelings of others.  They do as they wish and trample everyone else in their way.

Sphinxes, on the other hand, are paragons of law.  They dwell in cities, placing urban areas under their protection, building their nests on the roofs of tall buildings or in the lofts of airy palace.  Many Law Gods respect the Sphinxes greatly, and allow them to roost atop their pyramids or in special rooms constructed for exactly that purpose.

From there, the Sphinx dedicates itself to the welfare of the city, and depending on the Sphinx, this will mean different things.

What is the the Sphinxes’ primary concern?

1d6
1- Protecting the city from foreign enemies and keeping the peace.  The Sphinx will punish anyone guilty of disorder.  No riot or revolt will endure it’s terrible roar and razor claws.
2- Policing the city.  The Sphinx works with citizen-investigators to track down criminals and punishes them, either by forcing them to confess or by simply rendering summary judgement itself.
3- Maintaining the moral standards.  The Sphinx seeks out those it feels are or could corrupt the morals of the youth and deals with them in whatever way that seems fit.
4- Hunting the servants of Chaos.  The Sphinx is constantly vigilant for signs of Chaotic incursion, and seeks to prevent them from gaining any purchase in the city.
5- Protecting an important resource.  The Sphinx has either been charged or has simply appointed itself as the guardian of some rare or dangerous resource.  The Sphinx wishes to keep this resource safe and prevent it from falling into the wrong hands.
6- Tracking down and destroying beasts, magical or otherwise, that live near or in the city and could threaten the citizens.

The Sphinxes described above are known as the free Sphinxes.  Other Sphinxes, known as the Bonded Sphinxes, dwell in more isolated places or on the steps of Heaven, guarding holy cities sacred to the Gods of Law.  There these Sphinxes protect holy treasures and areas hiding divine artifacts, keeping them secure for the day they will eventually be used.

Bonded Sphinxes are sometimes also known to be Agents of the Law Gods, dispatched to hunt down criminals, Servants of Chaos and rogue deities. 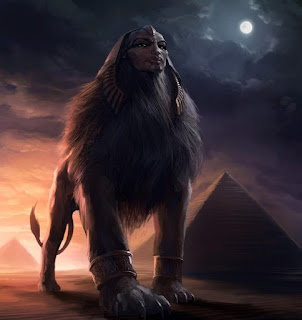 Inscrutable: Sphinxes are protected by powerful innate magics.  Their thoughts cannot be read and no ability or spell that detects feelings or mentality works against them.  Additionally, a Sphinx cannot be detected through a divination spell unless it wishes to be found.

Flight: The Sphinx can fly.  A Sphinx gains +4 to its armor and initiative while flying.

Spellcasting: Sphinxes have X Mana Dice.  These burn out on a 5 or 6.  Doubles or Triples trigger Chaos.  Sphinxes have the spells Banishment, Call to Heroic Death, Divine Retribution, Flame Strike, Greater Invisibility, I expect you to Dine, Shield and Zone of Truth prepared.

Chaos of the Sphinx: Roll 1d6 on the lower table to see what happens when a Sphinx's spells trigger Chaos.

1d6
1- Lightning bolts rain down on a circular area 50' in diameter, centered on the Sphinx.  All within must save or take 2d6 lightning damage
2- A thick fog that cuts visibility to 10' rolls in, covering a circular area 100' in diameter, centered on where the Sphinx is right now.
3- The Sphinx loses a Mana Die.
4- A glowing pattern of lights and patterns appears in front of the Sphinx.  All who were looking at the Sphinx must save.  Those who fail their save fall into a hypnotic trance for 1 minute, or until shaken out of it.  The Sphinx must also save.
5- The Sphinx is teleported 50' in a random direction, appearing in the nearest unoccupied space.
6- The Sphinx experiences a moment of divine revelation, losing its action and falling into a pseudo-trance.  The Sphinx will contemplate the mysteries of Heaven for 1 hour or until distracted from it by something worldly, such as being attacked, a loud noise or a bunch of irritating adventurers.

Roar: All Sphinxes can roar three times a day.  These roars are audible for anyone within a square mile and faintly audible for 3 miles around it.  Anyone who is within 500' of a Sphinx when it roars must save if the roar calls for it.

The first roar is incredibly loud.  All within 500' must save or be frightened.  Those who are frightened take 1d6 COG damage upon hearing the roar and each time they see the Sphinx do something impressive or scary.  This includes roaring again.  If a creature's COG is reduced to 0 by the Sphinx, that creature will flee, hide or beg for mercy.

The second roar is even louder.  All within 500' must save or be frightened and deafened.  If a creature is already frightened, they only need to save vs deafness and take 1d6 COG damage immediately.

The third roar is loud enough to shake the pillars of Heaven.  All within 500 take 4d6 thunder damage, save for half.  Any frightened creatures take 1d6 COG damage upon seeing this.

Tactics:
- Open with the first roar
- Take to the skies, use your spells to keep your distance
- Use roars as needed, depending on the amount of frightened creatures
- Punish the unjust, but let the worthy or righteous escape from you

To Customize a Sphinx, roll on the tables below:

How strong is this Sphinx?

A Sphinxes' MD is equal to their HD.

Sphinx Plot Hooks:
1d4
1- The Demon Seloza has returned to take his revenge on Az-Hari, the City which he ruled in ancient times before he was banished by a Prophet.  Now he has returned to retake what was once his.  The Sphinx who now guards Az-Hari has a problem with this.  Their clash is likely to destroy much of the city.  Will you aid one side in the hopes that it benefits you, or will you merely use the chaos as an opportunity to enrich yourself?
2- A Sphinx approaches you with a request for aid.  The Sphinx has become aware that an ancient artifact of Law has fallen into the hands of a Dragon who hoards war-booty.  The Sphinx wants to steal the artifact back.  The Sphinx will distract the Dragon, all you need to do is wait for it to leave it's cave, then go and steal it.
3- Cleo Quickstrike, an adventurer, attempted to rob a Sphinx and was captured for his trouble.  Fortunately for Cleo, his brother-in-law happened to be the Governor of an Imperial Province.  The Governor wishes you to go rescue his brother-in-law, and will reward you handsomely.
4- King Taro of Elshain, ruler of the city of Yu, is currently being besieged by an enemy army.  It is only a matter of time before his walls are taken or they run out of food.  Either way, the city will be destroyed and he will likely die.  He has been trying to convince the Sphinx that lives in the city to intervene on his behalf, but the Sphinx has sworn only to fight Chaos and its' servants.  He wants you to fabricate evidence that there are Chaos cultists among the enemies and present it to the Sphinx, in the hopes of stirring it to action. 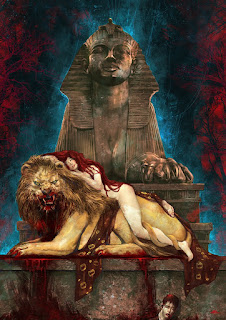