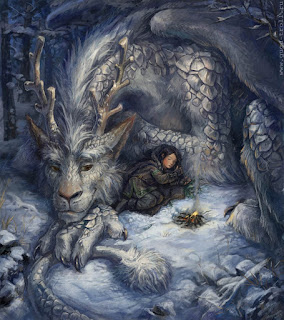 There are Half-Dragons* present in the world.  A Half-Dragon is, of course, half Dragon.  This happens when a Dragon falls for a mortal or a lower being that itself.  What happens next may depend on the Dragon.  The Dragon may attempt to seduce or woo that creature, it may attempt to bribe the creature and tempt it with wealth or power, or it may simply kidnap and ravish the creature.

Dragons all have two things in common.  Firstly, they are all servants of Chaos.  Dragons do as they will and do not obey any rule they disagree with.  Secondly, they are all prideful and self-centered, considering themselves near-perfect creatures who deserve to have everything they desire.  However, they are not all evil.

If you do not know what a Dragon's morality, roll on the table below.

This Dragon's morality is...

1d6
1- Patronizingly compassionate.  The Dragon doesn't like hurting sentient creatures and it regards humanoids with a patronizing kindness.  The Dragon may mean well genuinely, or it may be doing this to suit it's cosmopolitan sensibilities.  Either way, it's condescending and a bit grating to deal with.
2- Fiercely independent.  The Dragon just wants to be free to do what it desires and if you leave it alone, it will probably leave you alone as well.
3- Purely emotional.  The Dragon is totally amoral, with the emotional maturity of a teenager.  The Dragon is still highly intelligent, as all Dragons are, but it is a highly passionate and emotional creature.
4- Nietzscheian.  The Dragon is not cruel, but does take and abuse mortals.  It justifies this with an elaborate morality that essentially boils down to some combination of "Evil is Good and Good is Evil" and "Might makes Right".
5- Consumed by vice.  The Dragon is in the thrall of a vice.  Roll on the Demon table here, or select one of the Seven Mortal Sins.
6- Cruel and Rapacious.  The Dragon is evil, possessing many vices and evil desires.

If this relationship becomes sexual, either because the Dragon has the ability to shape-shift or it has the help of a Pornomancer, sometimes Half-Dragons are the result of such couplings.

To design a Half-Dragon, take the creature's normal statblock and roll 1d4+1 times on the Draconic Inheritance table. 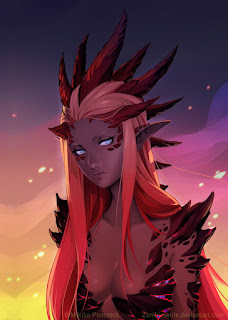 The Dragonblooded are a different type of creature.  Instead of being born with their Draconic Inheritance, they are ordinary creatures who obtain Dragon's blood and either drink it or bathe in it, depending on the amount of it available.  Dragon's blood is sometimes given by a Dragon to a faithful servant, usually a valiant and loyal member of it's Drakencult.  Alternatively, this blood may be taken by a Dragonslayer.

Note: It is common knowledge among Adventurers that Dragons are pure power given form, a spark of divinity wrapped in flesh. All of their bodily components are valuable to Sages for ritual purposes, as well as alchemy.  A Dragon's blood is most precious of all though- for it possesses the ability to grant great power.  However, if someones wishes for this to be done, they must use the blood while it is hot or within 1 minute of the Dragon's soul leaving it's body.  After that, the Dragon's excess mana begins leaking out and the effect becomes too weak to grant a Draconic Inheritance.

If you are gifted Dragon's blood or slay one and bathe in it's blood, roll on the table below a number of times equal to the amount of blood.

1d20
1- You gain resistance to the type of damage that the Dragon's breath weapon produced.  If you have additional rolls on this table, you can spend one of them to gain immunity to that type of damage.
2- Part of your body becomes covered in scales.  If you dipped a hand or limb into it, that limb becomes covered in steel-hard scales that can be used as a shield.  If it was your torso that was dipped or stained with the blood, you gain natural armor equal to 1d8+2 Armor.  If it was your head, you grow large bone ridges on your face and lose 1d4 CHA, but gain the benefit of wearing a helm permanently as natural armor.
3- You become more reptilian, gaining slit pupils, a forked tongue and cool skin.  You get +2 to all reaction rolls when dealing with reptilian or cold-blooded creatures, including other Dragons, but a -1 to all reaction rolls with non-reptilians.
4- Part of your body becomes stronger.  The Dragon's raw power flows into you, enhancing your body.  You may increase your STR by 1 point.  If you have additional rolls, you may spend them here to increase your STR by another point, up to a max of 18(+3).
5- You gain the ability to see the future as a Weak Prophet.  If you have an additional roll, you may spend it here to gain the ability to cast Rapturous Vision on yourself 1/Day.
6- You gain the ability to talk to animals as if you shared a language.
7- You gain the ability to use a smaller version of the Dragon's breath weapon.  Your breath weapon can be used 1/Day and does 2d6 damage of the same type the Dragon's did, save for half.  If you have additional rolls, you may spend them here to increase the power of your breath weapon by +1d6, up to 5d6.
8- You grow wings.  This grants you +4 Armor permanently.  If you have another roll, you may spend it here to gain the ability to fly.
9- You grow claws.  1d6, reroll sixes, of your fingers become tipped with wicked claws.  If you had enough to cover or dampen both hands, roll 1d10.  These claws function as a natural weapon, doing 1d6 sharp damage.
10- You grow 1d4 extra arms.  You must spend a 1d20-COG modifier days learning how to use your extra arms.  For each additional arm you grow, you have a 50% of gaining an additional attack.  However, if you are making more than 1 attack a round, you must distribute your Atk bonus among all your attacks.  For example, if you have an Atk bonus of +3 and you make three attacks, you can make all three of them at 1d20+1d6+1 or one as 1d20+1d6+3 and the others as just 1d20+1d6.
11- You grow spines out of the dampened area, such as your head, torso, arms, etc.  This destroys any armor or clothing over that area and gives you a natural weapon that does 1d6 sharp damage, if you manage to hit someone with a spiny part of your body.
12- Your teeth grow larger and sharper, and your jaw becomes more powerful.  You can now bite through anything a lion could bite through.  Your Bite does 1d6 damage, but is made with a -4 penalty unless your opponent is immobile.  If you have additional rolls, you can spend them here to gain the ability to bite through anything a grinding wheel (1d8, can bite through stone and wood), spend another to be able to bite through anything the jaws of life could crush (1d10, can bite through steel or anything softer), and one additional one to gain a bite as strong as a Dragon (1d12, can bite through anything but things superhardened, whether through magic or super-science).
13- You can smell the presence of magic.
14- You gain 1 Mana Dice and the ability to cast spells.  You do not start with any spells though.
15- You gain the ability to make light shine out of your eyes to illuminate a 30' cone before you.
16- You gain a terrifying presence.  As an action, you can scream and wave your weapon and force your enemies to save.  On a failed save, they take 1d6 Morale damage each round they are in combat with you.  If this damage exceeds their Morale, they will turn and flee, or if that is impossible, hide or beg for mercy.
17- You gain the ability to breathe underwater.
18- You gain the ability to hypnotize mammals or creatures smaller than you.  By making eye contact with one of those creatures, you can force it to save.  On a failed COG save, that creature is frozen in place by the instinct to freeze when a predator is nearby.  The creature will move if in obvious danger, but otherwise will remain frozen until snapped out of it by an ally smacking them out of it.
19- Your skin constantly exudes small amounts of energy aligned with the breath weapon of the blood of the Dragon's you used. For example, if a Dragon breathed fire your skin becomes hot to the touch, causing you to burn anyone (1d4 damage) who touches you.
20- Your soul becomes so powerful you become the enemy of death.  If you die, you can attempt to possess another living creature and take over their body.  Use the rules for a Ghost's possession ability.

Eating a Dragon is something totally different, of course.  The results of such a thing are covered here. 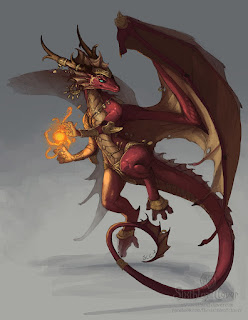 by  The-SixthLeafClover
By Yami Bakura at September 30, 2020