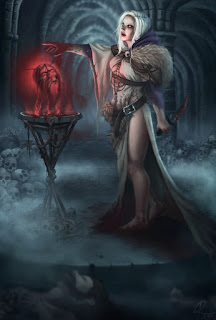 There are two kinds of magic: Thaumaturgy and Evocation.

Evocation is the type of magic most people think of when they imagine a Wizard.  Evocation is fast, loud and up-close magic; conjuring fireballs, shooting lightning, creating walls of ice or hurling giant icicles at people, that's Evocation.  Evocation involves channeling natural forces through the use of sorcery.  It is primarily, but not exclusively, used for combat.

Thaumaturgy is the more precise type of magic.  If someone is transformed into a Frog, teleported from one location to another or cursed, it is Thaumaturgy.  Most rituals also fall under this form.  Thaumaturgical works are usually more complex and slower, but allow more finesse, as well as more unique effects.  They can also work at greater distances- many Thaumaturgical works can be conducted against someone who isn't in the same room, or even the same city or country, provided you have a way to channel the power you are wielding towards the target.  You cannot do this with Evocation, which is generally line-of-sight only.

Note that these aren't hard and fast definitions- Sorcery is an Art too vast, complex and multi-faceted to define or explain easily, and there are always exceptions, exemptions and general weirdness that refuses to fit into the Sage's neat categories.

Protecting yourself from Magic:

If you are faced with someone who knows Thaumaturgy, good luck.  Your best bet is to avoid leaving anything around that could be used to direct magic towards you, such as valued possessions, items imbued with your mana, parts of your body, etc.  Still, in most cases, prevention is the only real defense from some attacks.  Try to avoid antagonizing Magi and maybe none of them will steal your favorite childhood toy and use it to teleport poisonous snakes into your bedroom.

Evocation, by contrast, while intimidating and dangerous, can be much more easily targeted.  All you need is a Wizard of your own. 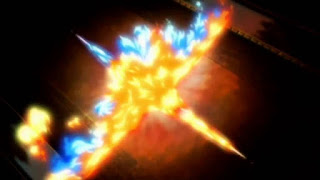 from Avatar the Last Airbender

Why Counterspell is Dumb and how to do it better:

Let's take a brief diggression to bitch about 5E.  In 5E, the spell Counterspell works by, when cast, it automatically counters a spell of 3rd Level or lower.  The spell itself is fine, but it is no good in the sense that it doesn't give players and interesting choices.

If the NPC Wizard counterspells the player's Wizard, it's basically equivalent to the Referee just skipping over that player's turn.  It doesn't add complexity or create interesting choices, instead just ignoring them.

So I adding a new system to give the players the ability to negate or blunt an enemy's spells, but in a more interesting way.
Note that the following rules apply only to spells that do direct damage or produce an Elemental effect such as a ball of fire.  This method of defense cannot counter Flesh to Stone; if you find yourself being faced by that spell, hopefully you have a Metamancer.  Otherwise, you're going to have to get creative.

Anyway, to continue, all Evocation spells can be countered by their opposite.  If another Evocation spell is cast against the same target or affecting the same area, if those two spells are of opposing elements, then compare the [sum] of both spells. The spell with the higher [sum] counteracts the other, overriding it.  However, that weaker spell can still reduce the effects of the stronger spell, subtracting its [sum] from the total damage of the stronger one.

For example, Theresa the Winter Witch casts Ice Spikes with 3 MD doing 12 cold damage on a hit.  Arvin the Calcomancer counters with a 3 MD Scorching Ray, creating three rays of fire that do 4, 7 and 4 fire damage on a hit, for a total of 15.  As his total damage is higher, Arvin's counter succeeds and he takes no damage.  Meanwhile, poor Theresa is hit by his counter, taking 3 fire damage.

Elements and their Opposites:


A brief note on how some Elements kill:

Fire burns, acid melts, ice freezes and lightning fries, but what about the more exotic elements?

Radiant energy strengthens the soul and causes it to draw closer to the body.  This is the energy transferred in healing magic.  The soul is fed energy and then automatically converts it into energy for the body, allowing it to heal itself.  Radiant damage consists of overfeeding the Vita (one of your souls) causing it to grow too large and burn out your spiritual circuits.  Being damaged by radiant energy is like being burned by heatless flame, you feel warm and uncomfortable at first, then your movements become uncoordinated like you're having a stroke, then you lose all feeling and drop dead, leaving your body with no visible injuries.

Psychic energy is a raw assault on the mind and soul, a spiritual flaying.  Psychic damage destroys memories, ideals and mana, grinding your soul down to the initial seeds of what you received at birth, then plucking that small spark from it's safe passage and scattering it into the Shallows of the Astral Sea.

Force energy is just temporary telekinesis, directed towards one task.  If you used force energy to smash a window, it would be exactly the same as if you broke it with your fist or threw a rock.  As such, any solid object, even non-magical ones, can protect you from force damage.  A wall of stone or a steel breastplate will both work, though one is much sturdier than the others.

You command the dust around you to rise up into a cloud and fill the air.  Any creatures caught in this cloud has visibility reduced to within 30-(5*[dice])'.  Non-magical ranged attacks within this cloud suffer from a -[sum] penalty and all rolls based on exerting oneself physically are made at a -[dice] penalty in the cloud.  For rolls based on perception, the penalty is -[dice] within visibility (see above) or -[sum] beyond it.

If cast with 3 or more [dice], the creature can also carve through unworked stone, but worked stone will stop it either way.

You cause a wave of mud or earth to blast out from your location, striking all creatures and objects within 10*[dice]'.  Creatures struck by this must save, on a failed save creatures are buried in [dice] feet of loose earth or mud.  Creatures in the air or at a higher elevation make this save with advantage.

You command the Earth to reach up and seize hold of [dice] creatures.  These creatures must save.  On a failed save, these creatures are restrained by shackles and chains of rock.  These restraints have [sum] HP and are immune sharp damage, taking half damage from bludgeoning.  Fire spells of greater [dice] can melt them, but this will turn the restraints into lava.  The restraints are vulnerable to (take double damage from) acid and cold damage.

Chains of the Earth

You create a whip made of water.  This whip counts as magic and does 1d6+[dice] damage on a hit.  When you first cast this spell, you may make an attack with it as a bonus action.

For every [dice] past the first, you may select one of the options below:
- Your whip does an additional +[dice] damage on a hit.  This damage is not included in the attack roll.
- Your whip can, when it hits someone, transform into a ball of water around a creature's head.  That creature takes [dice] CON damage a round and begins suffocating.  If this reduces the creature's CON to 0, that creature falls unconscious, but could be rescusitated.  Using this option destroys the whip.
- Your whip can, when it hits someone, freeze and restrain someone, binding their limbs together or pinning them against a solid surface or large object.  This restraint has [sum] HP and is vulnerable to thunder and fire damage and is immune to anything a big piece of ice would be.  Using this option destroys the whip.

You create a shield or wall of water.  The wall can be up to 10*[dice]' long, 10+[dice]' tall and [dice]' thick.  The wall has [sum] HP and can only be damaged by something that could hurt a wall of water.  The wall can block all non-magical ranged projectiles that strike it (Referee's Discretion) and many forms of magical damage, such as fire, acid, lightning, and others the Referee decides cannot penetrate it.  If the wall takes ice damage able to destroy it, the wall instead freezes solid and regains 1d6+[dice] HP.

You drag a column of water down from the sky and slam it into the ground or a solid surface that strikes a circle 10*[dice]' in diameter.  Any creatures caught in that area take 1d6+[dice] damage and must save or be trapped under the column of water, which pushes them down against the hard surface for the duration.  If the duration is long enough, creatures can begin drowning.

Casting this spell underwater just means the column of water is invisible, but it still pushes the creatures in the designated area down.

This spell only works on a creature in water.  When cast, a creature must save with a penalty equal to [dice].  On a failed save, that creature is seized by a powerful current and dragged in a direction of the caster's choosing, traveling 10*[dice]' in that direction.  The caster may change the direction of travel each round.

You select a circular area up to 15' in diameter.  All water within that area is instantly evaporated.  Living creatures caught in this area must save.  On a failed save, those creatures take [sum] damage.  On a successful save, they take only [dice] damage.

If cast with 1 [dice], this spell can only evaporate puddles or take the top layer off of a river.  At 2 [dice] this spell will cause small streams to run dry for a few minutes and desicate small plants.  At 3 [dice] this spell kills whole fields of plants and can part large rivers.  At 4 or more [dice] this spell lowers the waterlines of lakes and can kill entire groves of trees.

Whenever this spell is cast, the next [dice] days have a [dice]d10% of having rain. 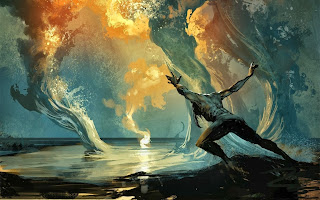