OSR: Calcomancers- The Snowmen, The Blazing Irons, The Burning Men

Calcomancers are the Wizards who people think of when they think of Wizards.  Hot-blooded, bold and utterly fearless, favoring destructive solutions with little regard for collateral damage.

Play a Calcomancer if you want be a Wizard who can destroy your foes with sudden and extreme violence.  You won't start with many subtle spells, but you will be able to dish out incredible amounts of punishment.

Power: Can start small fires (cigarette lighter or match-sized) with a snap.

Drawback: You lose 1 Spellcasting Dice if you haven't set something on fire in the past 24 hours. 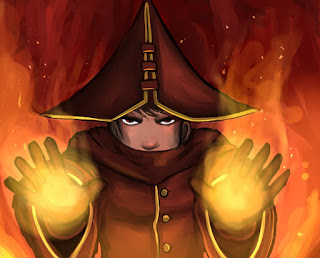 You super-chill all the air within a large area.  All liquids have their temperatures lowered to just above freezing, and all fires smaller than a bonfire or created with fewer [dice] than this spell was cast with are instantly snuffed out.  Creatures in this area without resistance or immunity to ice damage take a -[dice] penalty to all precise movements, including attacks, but not defense rolls.  They also have disadvantage on all saves based on agility or fast movement.

This cold lasts for [sum] minutes, after which the air cools back to the temperature of the surrounding environment.

One creature you touch is surrounded by a cloud of levitating embers.  For the duration, on that creature's turn as a free action, the creature may designate a target creature or number of creatures within 10*[dice]'.  The target creature takes up to [dice] fire damage as some of the embers surrounding the original creature strike it.  The spell lasts for the duration or until the embers have done up to [sum] damage, after which they all cool and fall to the earth as cold ash.

Heat [dice] objects up to their flashpoints.  They spontaneously combust.  If cast on a creature, that creature may save.  On a failed save, the creature lights on fire.  Creatures on fire take 1d6 damage a round until they take an action to extinguish the flames.

All within the targeted area take [sum] fire damage, save for half.

[dice] weapons within range are wrapped in an aura of flames.  This causes them to deal +[dice] fire damage for the duration.  Any flammable object they stab or strike with these blades while they burn also catches on fire.

You chill the air around you, creating an impenetrable bank of fog.  Lasts for [sum] minutes, unless it is sunny, or strong winds are present, then it lasts for 1/2[sum] minutes.

You fire a ray of freezing magic at one target.  That creature takes 1d6+2[dice] ice damage.  Any item struck by this spell is encased in a layer of ice that has [sum] HP and cannot be moved or used until the ice is melted.  The ice has vulnerability to fire damage.

If a creature is struck, that creature gets a saving throw.  On a failed save, it is frozen in ice and cannot move until the ice is melted.  The creature can also make a STR check to break free, with a DC equal to [sum]+[dice] (max 20).  On a successful save, the creature is frozen in place but can still take actions that do not require movement, though until the ice is melted, the creature still gets a -[dice] penalty to anything requiring dexterity or precise movement.

[dice] metal objects within range are superheated.  This does [dice] damage to any creature touching these objects.  Creatures holding such a superheated metal object take a penalty to all rolls equal to [sum] to do anything, unless they are immune to fire damage.

One object you touch gives off light that illuminates 20 + ([dice] * 10)'.  If shoved into someone's face with a successfully attack roll, that creature must save or be blinded.  If cast with four or more [dice], then the light has all the qualities of natural sunlight.

[dice] sources of fire are immediately snuffed out.  This spell can be cast as a reaction if fire suddenly comes upon you.  If used against magical flames conjured by a spellcaster, engage that creature in a CHA contest.  If you win, their flames are extinguished, doing no damage.  If they win, their flames are unaffected.

You lower the temperature over a specific area, freezing the water in the air and causing it to come down as snow.  This snow blankets the area in a wide cylinder and covers the earth in a layer 1/2[dice]' deep.  Open fires are extinguished and outside conditions become miserable.  Unless they have resistance or immunity to cold, or are otherwise prepared for cold weather, creatures must make a morale check to remain outside.

If cast with 3 or more [dice], the storm also drops hailstones that do 2[dice] damage to any creature outside or unprotected.

By invoking the power of the Eternal Blaze, you can peer into the flames and see visions of the future.  You can ask up to [dice] questions, and each question will receive a vague answer.  These answers usually take the form of images or symbols that much be interpreted by the one who sees the visions.

One creature must save.  On a failed save, that creature is instilled with an irrational fear of fire.  That creature, whenever it sees an open flame bigger than a candle becomes frightened.  It will not get any closer to a fire and takes 1d6 Morale damage each round it is near a fire or against an enemy that uses fire as a weapon.  If this damage reduces the creature's Morale to 0, that creature flees in terror.

For the duration, you can speak with fires as if they were living creatures.  The larger the fire, the more intelligent it is.  Candles are about as smart as insects, campfires are about as smart as slow-witted men and forest fires are highly articulate.  However, even intelligent fires have knowledge only relating to things they have burned, the environment around or within them, weather conditions and threats to them (wind, rainstorms, bucket brigades, etc).

If you wish, you can also ask the fire for a favor, which the favor may grant, in exchange for some form of payment.  Generally, fires want fuel, a removal of a threat or access to areas that the fire is, for some reason, unable to reach.

Doom of Fools:  You erupt into a living inferno or ice storm (whichever is more appropriate).  You fly around, shooting flames while being on fire and blowing shit up.  Your only goal is the destruction of people and property, and you go about this task with insane, cackling gusto.  Lasts 2d6 minutes.
Doom of Kings:  As above, but lasts 2d6 days.
Ultimate Doom:  As above, but permanent.

This Doom is avoided by traveling to the Moon and bathing in the red water of its oceans, or by drinking the milk-white water of the Nightmare Sea.