So, you want to play a Wizard, eh?  Go read some forbidden grimoires scrawled in shaky hands by insane madmen, ruling over imaginary kingdoms as they willingly destroy their own bodies for eldritch power?  Well alright, but remember, you were warned.   Everyone who picks up a spellbook with the intent of harvesting the knowledge within dooms themselves to an early grave at best, and other fates less appealing

This is my version of the Wizard class.  It's sort of compatible with most OSR stuff, though LotFP players might note that it was less health than any other Wizard on the Market.  That is purely intentional.  If you want to not die, play a Rogue or something. 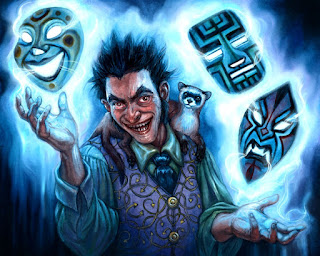 Type of Magi: At level one, please select what type of Magi you are.  See here for all the types of Magi approved by yours truly.

Book Casting: You may cast a Spell out of your Spellbook.  This requires you to spend an extra action to read it out of the book, but does not require it to be already prepared.  You must still roll a spellcasting dice.

Safety Casting: Once per day, you may replace one of your spellcasting dice with a "1".

Rapid Preparation: If you wish to prepare a new spell, it now takes ten minutes instead of an hour.

Astral Warrior: As a free action, you may make a Will save.  On a success, you may cast two spells in one turn.  You may only do this once per fight.

Spellsmith: You may combine two spells and create something new.  This destroys both spells and creates a new one, with some of the properties of both.  This new spell does not count toward 'Spells Learned'.

Additionally, you must save again or lose the spell you send out.  On a success, you keep it.  On a failure, it is lost to the Astral Sea forever.

You get a +1 bonus to your Save for:
a) every 1 gp spent on reagents, inks, magical artifacts, incense, or other tools of your trade
b) the number of Wizard Levels you possess
c) each ritual preparation you describe to the GM

Arch-Magi: You can either learn six new spells from any spell list or invent an entirely new spell with the DM's permission. These new spells do not count toward spells learned.

Master of Magicians: Once per day, you may add +10 to the sum of any rolled Spellcasting Dice.
By David Stone at October 11, 2017