Cthonomancers are Wizards that manipulate stone, steel and gravity.  They are rumored to be able to turn lead into gold, live forever, and fly.  None of these things are true, but the truth is no less strange.  In fact, it is far more bizarre.

Cthonomancers are for the Wizard who wants to really deliberate on how to use their spells, as none of their spells can actually damage enemies directly.  Though that doesn't mean enemies are safe around them, either.  The first 12 spells are the starting spells, to determine a Cthonomancer's starting spells, roll 1d12 on that table.  The lower two spells are rare, and as valuable as magic swords.

Power: By touching a surface and concentrating for a couple of rounds, you can sense all things within [level]*10' that are also touching the surface.

Drawback: You lose 1 Spellcasting Dice if you aren't touching the ground.  You get it back as soon as you set feet on Terra Firma again. 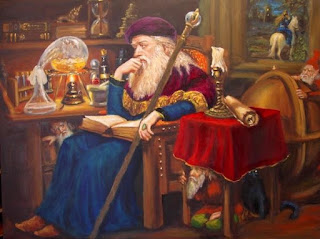 If Create is used, the caster conjures [sum] gallons of water.  This water can be directed to fill any container within range.  Alternatively, it can be fired at a creature as an attack.  The attack requires an attack roll and on a hit does no damage but if the [sum] is 12 or higher, that creature must save or be bowled over by the force of the impact.

If Destroy is used, the caster can evaporate up to [sum] gallons of water.  This water can be free-floating, standing or can be soaked into objects.  This can be used to dry clothes, turn mud back to dirt.  If used on a creature that requires water to live, this does 1d6+[dice] nonlethal damage.  Creatures that are primarily composed of water, such as Oozes and Water Elementals, instead take [sum] damage from having Destroy Water used on them.  Creatures that do not need water cannot be hurt by Destroy Water.

Reduces an object's mass and weight by 99%.  You can cast this as a free action.  Feathered Creatures take no fall damage.  Feather creatures also take double damage from all non-feathered creatures.

Grease affects a 10' x 10' area or an object.  To move across it or hold a greased object, one must make a Dex Check.  On a failure, they drop it or fall prone.

[dice]*10 cubic feet of material is turned into a liquid.  This lasts for [sum] minutes before reverting to solid form, though wherever the liquid has flowed.  If you use this on a creature, you must succeed a touch attack.  On a hit, if their form is small enough, their whole body is liquefied.  If a creature's whole body is liquefied, they get a save. On a successful save, they survive and when the spell expires their body is restored.  On a failure, they die.

As long as this spell is active, you can divide and shape metal with your bare hands.

Target repels stone, pushing it into a new shape.  If the target is standing on stone, they fall through the stone leaving a body-shaped tunnel.

Creature cannot touch or affect ferrous metals for [dice] minutes.  It goes right through them.  Arrows with wooden shafts do minimum damage, swords cut their clothes but not their flesh, if they are naked they can walk through it like its made of fog.

Change one type of stone into dust.  Transmutes one cubic foot per [dice].  This dust fills the air if it is touched.  It also highly flammable.   This is a permanent transmutation.

Convert [dice] cubic feet of stone into lava.  Transmutes one cubic feet per [dice].  Anyone within 10' of lava takes 1d6 fire damage, and take 2d6 fire damage from contact with it.  The lava cools after [dice] rounds.  After that the outside cools it is still hot, but does not cause people damage. This is a permanent transmutation.

Convert [dice] cubic feet of stone into mud.  This is a permanent transmutation.  The mud is a foot deep and behaves like normal mud.

A sphere of water centered on the caster [dice] feet in diameter transmutes into a thick fluid that can be breathed by air-breathers.  This sphere travels with the caster, and is heavier than water.  It contains enough oxygen for [sum] creatures until it expires in [sum] minutes.

Target creature or object gains an increased gravitational pull and starts attracting everyone or anything nearby.  To resist being dragged into the object, target must succeed a saving throw with a penalty equal to [dice].  If four or more dice are used, anything dragged into contact with the target creature or object takes [sum] damage a round it is in contact with the target object.

Doom of Fools: For 2d6 hours, you hear the heartbeat of the Earth.  You are desperate to get closer to it, and will usually begin digging straight down with anything you have in you.  If there are caves nearby, you will use those.  If stopped from doing this, you will resist violently.  You will go down as far as you can, until you come to your senses, are stopped by force or die.

Ultimate Doom: As above, but permanently.  The Wizard will spend the rest of their life wandering the Veins, and going even deeper, looking for the Heart of the Earth.

This Doom is avoided by leaving the Earth totally behind, or by making a pact with one of the gelatinous Lords of the Upper Air.