In Eldritch Americana, Time Travel is not as difficult as people think.  After all, everyone is time traveling toward the future at all times, sailors on the sea on fate.  But sometimes, the fabric of time will become entangled by an object's gravitational pull, whether its gravity or the its "Gravity".  Other times the fabric of Time and Space can become folded and distorted, or tears can develop.  The former usually occurs because of Wizards and dungeons, and the latter are usually caused by adventurers messing around with portals or extra-dimensional storage devices.  And in the most serious cases, paradoxes can occur.  All of these things are undesirable to the Lord of the Infinite Time-Ways, so enforcers are needed to mend these gaps in time, and ensure everything is proceeding on schedule. 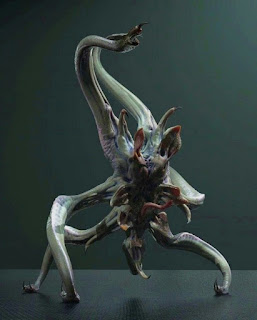 (This isn't really how they look, I have no idea what they look like)


For this purpose, The Author of Fate creates Angels of Time.  Angels of Time are among the foremost of Yosganeth's servants, carved of deep time and endowed with his most powerful magicks.  Angels of Time tend to look like vaguely humanoid versions of ancient prehistoric life, or glimmering automatons from a universe yet, or never, to come.  They are always immediately recognizable as the servants of a God, and walk with imperious grace.  If you are not the source of the problem, and do not inconvenience them, they may just walk past you.  Though the chance of this drops the closer you get to the anomaly they have been sent to correct, and how much they think you know about the current situation.  An Angel of Time is a blunt instrument, a wrecking bar sent hurtling through the fragile constructions you have left so carelessly lying around.  They always take the most direct, most efficient way of fixing a problem.  They are ruthlessly, excessively violent, and their favorite way of dealing with mortals who need to be eliminated or get in their way is to wipe them off the face of the Earth.

Thankfully, Angels of Time are mercifully rare.  They only tend to show up when their are major temporal or spatial shenanigans.  For example:
- one of your dingus players put a bag of holding inside a portable hole
- one of your dingus Wizards attempted to travel through time
- one of your players acquired an item that stops, slow, or otherwise manipulates time and used it too much
- a giant magic ritual was interrupted at the last second, and now is backfiring spectacularly
- something happens that breaks the fiction of the game, such as a player asking the DM if they can answer the player's cellphone 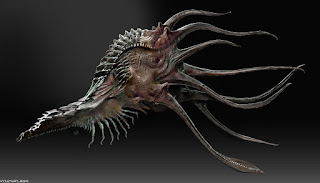 (However you describe them, make sure its weird and messed up)

Rejuvenation Ray: The Angel of Time restores an object or person to any earlier state.  The target must save or be de-aged 1d4 years.  The d4 explodes, so on a four, they are also de-aged 1d6 years, which also explodes, and so on.  This causes them to reduce 1d3 stats by 1, and lose 1 Experience level.  The Angel can also use the Rejuvenation ray on its lowest setting to heal 1d8 HP.

Non-existent: Whenever an Angel of Time is killed or flees, their changes are submitted to the Department of Timeline Management and Paradox Control for review.  Acceptable changes are approved, unacceptable ones are nullified.  Essentially this means that the DM is allowed to hand-wave whatever the Angel did as having "happened" or not.  For example, if the Angel is killed, the players are simply planted back before the Angel arrived.  But if the Player who caused the paradox died and any lingering effects of the time/paradox tom-foolery were fixed, then that still happened.

Tactics:
- Use Decay Beam on the weakest
- Use Rejuvenation Ray on the strongest
- If in danger of dying, create a Stable Time Loop, link up with your past self, and have them heal you
By Yami Bakura at December 12, 2017