GvM: Hetacairns- the Men with a Hundred Hands 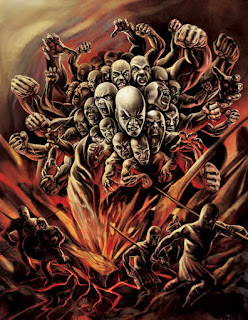 They are born as normal humans after a desperate mother offers prayers to some long forgotten god or accepts a dubious bargain from a Witch.  She always gives birth to a son.  For the first twelve years of his life, he will be normal enough, with few exceptions.  He will have certain traits as well.  He will be intelligent, but lacking almost all social skills.  He will be more interested in things rather than people.  He will like to read.  But most importantly, he will like to build things.

But once he reaches thirteen, he will develop a particular deformity.  He will grow a third arm.  From this point on, for every year he grows, he will grow another arm.  As he grows, his intellect will increase.  He will devour books on everything that interests him, from architecture and machining to computer programming and medicine.  But even as his IQ climbs, he will become more and more distant from humanity, losing what little social skills he had.  He will become unable to understand the emotions of others as his fade, to be replaced with cold reason.

Some of these poor fools are killed early on, either by Those who Know or frightened Normals.  Some go to become medical anomalies or live with freak shows, for a brief while.  But these sojourns are always brief, as their arms continue to grow. Inevitably, if they survive, they leave and go out onto their own, isolating themselves from a populace that no longer can understand them.  There, in the silence, they begin to work.

And the work of the Hetacairns is astonishing.  They are miracle workers- producing impossible technology and astonishing machines from common materials.  They do sometimes sell these things, but most of their wonders are left unused, as they were not created for any purpose other than to see if it could be done.  However, all their works, even the unsuccessful ones, are always created to fulfill a purpose.  They are usually beautiful, but this is never intentional.  The Hetacairns cannot truly understand beauty.  Art eludes them.  The carefully chosen words of a poem are an enigma to them.  They can perform any number of mechanical tasks or mathematical calculations, but analyzing a painting would confuse them.  They do not hate these things, but they do not trust them.  Metaphors and riddles anger them, usually because they think the person using them is attempting to confuse them.  They do not trust those who speak eloquently.

Hetacairns tend toward cynicism and do not trust most people, hardened by years of isolation and rejection.  They are loathe to give up their wonders for any reason, and are equally unlikely to give you anything.  They have few friends, instead building clockwork automatons or conjuring lesser spirits to assist them.  Someone who speaks bluntly, has an interest in esoteric mechanics and experimental technology might be able to befriend them, but most people will never be able to understand them.

Hetcairns try not to fight, but when they do, they can be quite terrifying.  The weapons and armour they produce for others are unique and terrible, each one a work of gruesome art, but they spare no expense when it comes to arming themselves.  They make uniquely fitted suits of armor for themselves, and arm themselves with strange, elegant weapons.  These weapons vary from Hetacairn to Hetacairn, but they can do anything from fire legions of tracer rounds to electrify dozens of razor-sharp rapiers. 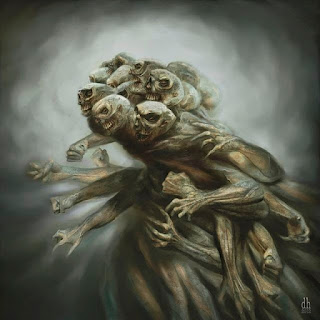 Extra Arms: The Hetacairn has 1d20 extra arms.  This number is X, and should be substituted into the Statblock above.  The Max HD for any Hetcairn is 10, and the maximum AC is 17.  There is no maximum upper limit to damage.

Tactics:
- Distribute damage evenly at first
- Flee if you are in danger of being killed
- Destroy your own wonders before someone else tries to take them 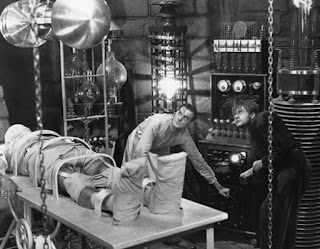 Wonders of the Hetacairns
1d20
1- A machine that spins music into cloth.
2- A machine that combines two living creatures placed within it into one organism.
3- A cloning vat.  Place a tissue sample into the vat, along with a special broth of nutrients, calories and other chemicals. Then wait 1d6+3 months.  When the time has elapsed, a fully grown organism that is identical to the one from whom the original tissue sample was harvested will emerge.
4- A tube that can regrow lost limbs.  Takes 1d6 hours to use.
5- Living bandages that heal you.  For every minute attached, the bandages heal 1 HP.  Once they have healed someone to their maximum HP, they continue healing them, giving them 1 temporary HP on top of it.  For every 5 points of temporary HP given to someone, they must save, with a penalty equal to their temporary HP.  On a failure, they develop cancer.
6- Lightning in a bottle.  Can be used once.  When the bottle is broken, the lightning electrifies whatever it hit for 5d6 damage, then flows through anything conductive nearby.  If nothing such as that exists, it returns to the sky.  Also causes thunder, which is obviously very loud.
7- A sentient computer virus.  The virus is named Gr0ucho_M@rx.exe.  It wants to steal valuable data, talk to people, and obey the one who holds the magical flashdrive that contains it.  If the flashdrive is ever destroyed, all copies of the virus perish.
8- Strawberry jam that eats everything organic.  As Green Slime, but strawberry scented.
9- A mind-reading machine.  Put the helmet on someone, and the attached monitor displays whatever they're thinking about.  An obvious security risk, and murder on your electric bill.
10- A fortune telling robot.  Looks like a crying woman in an anarchronistic dress.  She tells fortunes for a quarter.  Her fortunes are always correct.
11- A Magical Sword.  The Sword is called Greyglass, and is made of smoky crystal.  Anyone stabbed with it must save.  On a success, they take 1d6 extra damage.  On a failure, bits of crystal break off into their bloodstream and begin flowing through their bloodstream, shredding everything in their path.  Their death will be hideous.  This crystal does 1d6 damage a round, until they cut themselves and take 1d6 damage and pass a saving throw.
12- Dust of Protection.  Make a line of this in front of a doorway.  No one who means you harm can cross it.  But if anyone else smudges it,  it is nothing more than dust.  There is enough dust here for 1d6+2 uses.
13- Wings.  Made of wax and feathers.  They work surprisingly well, but if you take fire damage while wearing them, save.  On a failure the wax melts, and they wings stop working.
14- Powdered nightmares.  Extract from the sleeping head of a thousand disturbed men.  If mixed into someone's food, drink or injected into them, the next dream they have is a horrible nightmare that prevents them from gaining an bonus from sleeping. After that first night, make a saving throw.  On a success, these nightmares reoccur for 1d6 nights in a row, before the extract all passed out of your body.  On a failure, they last for the rest of your life.  Unfortunately, or perhaps fortunately, that won't be long.
15- An hour of borrowed Time.  Stored within a stop watch, pocket watch, or clock.  Push the button to stop time.  Time proceeds to stop moving for up to an hour.  All souled beings still can move normally, but unsouled and artificial beings are trapped for an hour.
16- A demon-catching Vacuum.  Sucks up ghosts, bad spirits and misfortune like its dust.
17- Some of the Almost People.
18- Artificial limbs.  They're better than the original, granting stat boosts and special powers.  This Hetacairn has 1d6 arms, 1d6 legs, 1d20 eyes, and a few other random doodads.
19- A stone mask.  Put it on and reject your humanity!  Wearing the mask and spilling blood on it immediately calls for a Cha save.  On a failure, you die.  On a success, you gain the powers of a Level 3 Vampire immediately.
20- An invisibility cloak.  It works great, but does not disguise sound, smell and can only cover one person, or one person and a baby, or two children.

Failed Wonders of the Hetacairns
1d12
1- A Time-Machine.  Actually works, but the Hetacairn is too worried about the possible damage he could do to the time stream to actually use it.
2- An Assimilator Crystal.  Assimilates whatever organic matter it touches, turning it into crystal.  A slow, hideous death. Leaves behind crystal statues.
3- A fold in space.  Walk through it and travel to some faraway destination.  Not that you can come back.  Also may attract Outsiders and/or cause madness in those who use it.
4- A warp drive.  Allows you to travel very, very far very quickly.  But ever time you fire it up, it creates a tiny hole in space.
5- A miniaturized fusion reactor.  Takes a lot of energy to turn on.  But once on, if it messes up, it would explode, doing 10d6 damage to anything within 50', and irradiating anything within 1 mile.
6- A tiny particle accelerator.  The secret to creating holes in the universe to summon enormous Outsiders through.  Also, you can use it to make gold.  Mostly a novelty item.
7- A space ship.  Doesn't actually work.  Its engines work like super-hot flamethrowers, but the thing can barely fly in atmosphere, and in space it would utterly fail.  Every time it takes off it has a 3-in-6 chance of breaking apart and exploding.
8- Spray that turns anything it touches into explosives.  And I mean anything and everything.  Does work.  Works too well.
9- A piece of armor that attracts harm.  All attacks within 100' of this armor have a 1-in-6 chance of missing their intended target and hitting the person who wears the armor.  Once worn, the armor can't be taken off until you are dead.
10- A cursed sword.  The sword is called 'Cleankill' and allows you to teleport up to 30' a round as a free action.  The sword is cursed, however, in that whoever uses it tends to become a bloodthirsty cannibal in time.
11- Magical, fiery boots.  They are too powerful to be used.  When you activate them, they boost your speed and give you the ability to make flying, fiery kicks.  But as you use them more and more, the heat and speed you are boosted to accelerates until you either burn to death or suffer a speed related injury, whether its shattering your own legs, breaking your spine, or snapping your own neck.  This is a weapon that could be used to dropkick Shub-Niggurath on its highest level, provided the user could actually survive it.  The Hetacairn has thus labeled this weapon a failure, because it is too powerful for anyone to use, and thus, has failed its one goal.
12- A soul-catcher.  A ring that allows its user to capture a loose soul or spirit in its gems.  The problem is that the soul can still communicate with the wearer of the ring, and try and possess them, if they were so inclined.  So its not so much a trap for a soul as a trap for the person wearing it. 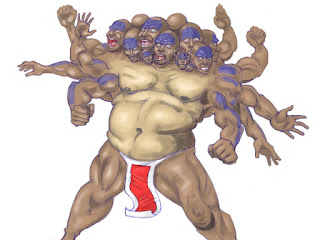