For further reading, see here and here.  Also here is the Dragon statblock I use.  Now, on with the show. 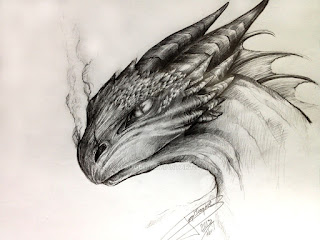 There are only three types of Dragons, babies, full grown and Epic.

Babies are young dragons.  They are between the size of a large dog and a horse, brightly colored, and childlike.  You should be able to fight one of these at first level, and a pack of these by level three.  You might still die though.  Intelligent, cruel, yet immature in both intelligence and cruelty.  These are usually protected by their parents and have no hoards of their own.

Full Grown Dragons are the rank-and-file.  They are between the size of a two story house and a small church.  Bullets ricochet off them like rain off a tin roof, and most swords are utterly useless unless stabbed into a soft spot like an eye or underside.  Intelligent, greedy, arrogant and insane.  You know the drill, they breathe fire or something equally hideous, hide in caves, etc.  These are tough to kill, but not impossible.  They can be overcome.

Epic Dragons are the ones that populate Myth and Legend.  These are the Dragons of Chaos, the King of all Reptiles, things like that.  You're unlikely to fight one of these unless you're seeking one out or already level 20.  Even if you do fight one, you'll probably lose.

First, all Dragons have a name.  Dragons name themselves after the greatest treasure in their hoard.  For example, Dawnbreaker, the Dragon of Quills and Queens is named after the magical Mace of the same name, as when he discovered its existence, he stole it from The Radiant Emperor 270 years ago.

Secondly, all Dragons have a title.  This title is two parts, phrased like this: I am X, the Dragon of Y and Z.  See above for a good example of this.

Thirdly, All Dragons have a Breath Weapon.  They are usually immune to whatever they spew out of their mouths.

Fourthly, all Dragons hoard things.  Most hoard something valuable, or at least, possibly valuable, but it can be almost anything.  Two Dragons that live near each other will not hoard the same thing, as that would lead to conflict.

Fifthly, All Dragons have a Drakencult, a tribe of Humans or other short-lived beings that the Dragon rules over as a vengeful and merciful God.  The Drakencult are usually as insane as their Dragon master, and loyal to a fault.  In some cases, perhaps you could turn them against their God, but this is unlikely to work, due to the years of indoctrination and the subtle rotting effect caused in mortals when they're around a Dragon for two long.

Sixth, all Dragons are insane, and have a Delusion.  This Delusion is something they believe, and will not go against.  The only way to speak to a Dragon is to agree with their madness, and play along. To go against their delusion is the fastest way to get yourself killed.

And finally, all Dragon treasure is cursed.  Anyone who steals Dragon treasure or takes it without explicit permission will be cursed.  These curses count as normal, and can be broken.  However, even if they were not cursed, the Dragon will go in pursuit of its treasure, either going on a rampage or sending teams of assassins after you, to slay or capture you and recover the treasure for the Dragon. 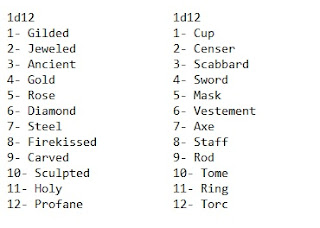 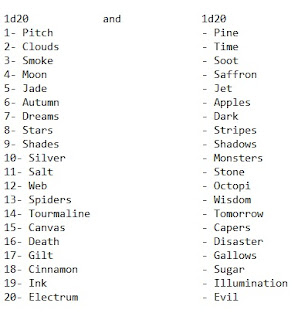 This Dragon's breath Weapon is...

1d20
1- Fire.
2- Burning, sticky Tar.
3- Clouds of poison gas.
4- Freezing Wind.  Ice damage.
5- Life.  Heals you past the point of helpfulness, then a bit more.  Gives you cancer, mutations, and worse.
6- Death.  The cold chill of the grave.  Saps your Strength, leaving you a husk of your former self.
7- Acid.
8- Dessication.  Its breath is the hot wind of the Desert, which sucks the moisture out of you and mummifies you on the spot.
9- Toxic sludge.  Poisonous and sticky.
10- Hallucinogenic Smoke.  Like fighting the ghost of your long lost zebra father in the middle of a Bob Marley concert.
11- Radioactive Dust.  Save vs cancer.
12- Shards of glass or sharp crystals.  Does slashing damage.  Strips the flesh off bone like a sandblaster.
13- Ultraviolet Radiation.  Invisible and enormously lethal.
14- Insanity.
15- Green Gamma Beams.  Does radiation damage, and causes you to save or mutate.
16- Anti-Fire from the Antiverse.
17- It spits giant balls of stone or iron from its gullet.
18- Snakes.
19- Swords.
20- It doesn't have one, but is instead a level 1d6+2 Spellcaster.

This Dragon's Drakencult is made up of...

1d20
1- Horrible old men.
2- Beautiful women in sparkly dresses.
3- Identical Twins.
4- Dozens of clones of the same person.
5- Kobolds.
6- Draconi/Dragonborn.
7- Some sort of Beastman.
8- Clockwork automatons or Golems.
9- Tough street urchins who regard the Dragon as a sort of parental figure.
10- Warriors, berserkers, former knights, ronin or dudes with tattoos and axes.
11- Actors.  They wear masks and wander around, putting on plays and performing improv with anyone nearby.
12- Musicians.  They play music.  Some of them may be able to weave magic into their songs.
13- Thieves.  They will pretend to be normal servants, but expect to be missing your pocketbook and most of your jewelry by the time you leave.
14- Ancient people displaced from their time of origin.  They could be cavemen or squatting primitives, or people from long-fallen empires, kept in the dark about how much time has passed.
15- Undead.  They are bound to the Dragon with magic.  They know no pain, fear, or hesitation.  They burn in the sunlight, and flee from holy symbols.
16- Lepers or those with the Plague
17- Lycanthropes.  Fairly normal except for when they get angry, then they transform into animals.
18- Young Vampires.  They need blood, but have few Vampiric powers.  Some have drank the Dragon's blood, and may have even survived the process.
19- Philosophers.  They will challenge you to rhetorical debates and entrap you in chains of logic.  You can just kill them, but if you do, aren't you proving them right?
20- Lesser Wizards (Magelings).  No, not that kind. This kind.

This Dragon, like all of them, is actually insane.  This Dragon believes...

1d12
1- One piece of its hoard is actually a forgery, and the Dragon is desperately searching for it
2- That it knows you, and you were hired to a job for it.  The Dragon will mis-remember the job every few minutes.  It expects results.
3- That their are rats in the walls, who are spying on it.  It wants you to find the one controlling the rats, and kill them.
4- That it is actually a human, hiding in a cave from a Dragon.  It will ignore the fact that it is actually a massive lizard.
5- That it is being hunted by the Shadow of a Tiger it once killed.  The Shadow is stalking the Dragon, waiting for it to weaken.  The Dragon is hallucinating, and sees the Tiger's Shadow everywhere.
6- That the Sun is actually a great, glowing jewel.  The Dragon desires to possess the Sun, and is currently using its Drakencult to build some sort of fantastically elaborate and doomed device to reach the Sun, so it might claim the treasure for itself.
7- That the Stars are spying on the Dragon.  It refuses to fly at night, except for in the most desperate circumstances, and tries to only go out during the day.
8- That its minions are incompetent.  It will demand your help, then when you fail to meet its high and ever-changing standards, it will turn on you
9- It is having strange, prophetic dreams.  Interpret them for the Dragon, and you will receive a boon.  But if you interpret them in some way that the Dragon does not like, the Dragon will eat you.
10- The Dragon believes it is actually a destined child of prophecy, and one day it will receive the summons that dictate it to finally bring about the end
11- The Dragon believes and acts like it fills some important position of power, such as a King, Chancellor, etc.  It issues useless dictats and has decorated its lair like a Palace worthy of the position it believes it fills.  If the Dragon was ever sufficiently motivated to go actually check, it would find an usurper in its place, and that its totally sensible and useful declarations were not being followed.  This would make it quite mad.
12- The Dragon believes that you are here to kill it.  It will plead with you and make a few requests of you, and try and talk you out of fighting it.  It doesn't expect you to accept though.

This Dragon's treasure is cursed.  Anyone who steals it will suffer... 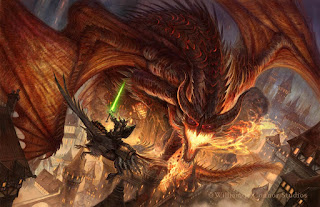