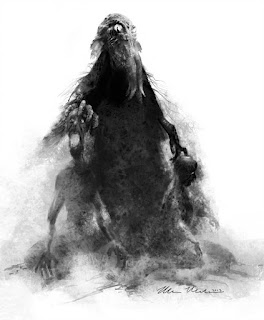 Telepathy: Mind-Flayers can telepathically communicate with anyone it wishes to.  They can do this with anyone within 100' or those it can see.  Mind-Flayers can also sense the feelings and desires of those around them, but cannot directly read thoughts unless invited into someone's mind, or having broken in through the use of their 'Mind Control Aura'.

Mind Control Aura: A Mind-Flayer's psychic presence is so great that it crushes the will of lesser beings around it.  As a free action, the Mind-Flayer may activate it's Mind Control Aura (it doesn't usually leave it on).  This aura extends for 100'.  Anyone within this aura must save.  On a failed save, for each round they are within range, these persons take 1d6 WIL damage.  If the WIL damage taken ever equals or exceeds a person's WIL score, they are enslaved to the Mind-Flayer, and must obey its orders.

Psychic Blast: A Mind-Flayer may assault the minds of everyone around it by unleashing a wave of telepathic power.  This wave strikes everyone within 50' of the Mind-Flayer indiscriminately, harming friend and foe alike.  Everyone hit by this wave takes 2d6 psychic damage, save for half.  They also take an equivalent amount of CHA damage, save for half.  If the amount of CHA damage taken ever equals or exceeds someone's CHA score, they gain the Conviction, "I am terrified of Mind-Flayers, and will not fight one if I have any other option."

Tactics:
- When fighting starts, activate Mind-Control Aura
- Then use Telekinesis to try and take a hostage
- If that fails, use Telekinesis to disable the strongest person while hiding behind your mind-slaves
- If you run out of mind-slaves, use your Psychic blast
- If anyone is still alive, flee

Zak Smith came up with this idea long ago about a type of creature he called the Philosopher species.  Basically, the conceit was that if you had telekinesis from birth, your thoughts would directly translate into action, so you would likely regard all non-mental things around you as your property.  It was a cool idea, but one that never really went anywhere.  I'm using that idea right now, so credit where credit is due.

However, Smith said one thing that I just can't agree on.  He said that if a Mind-Flayer found a group of adventurers in its lair, it would be like you finding a pest having invaded your space.  And frankly, that's ridiculous.  Did Smith forget that Mind-Flayers can read minds?

First, let me clarify something.  When I use the word Mind, I use the word interchangeably with Soul.  I do not mean brain.  The brain is a lump of tissue, an organ.  It does not think or have thoughts or feelings.  Only the Mind/Soul does that.

All living creatures have a Mind.  For most creatures, their minds are small and insubstantial.  An insect's mind is tiny and primitive, a spark of spiritual energy that will not survive the death of the spirit's body.  Then, as you rise higher up the great chain of being, you eventually reach creatures whose souls are strong enough to survive outside the body, that is, mortals.  Going up the chain further, you will find creatures who are entirely Soul or those who have Souls so great that they resemble spiritual suns or stars.

Now mortals usually don't notice this fact consciously, as you don't have the ability to read minds.  Mortals just recognize that on the great chain of being, some things are stronger or weaker.  But if you could read minds, you would see things in a radically differently way. 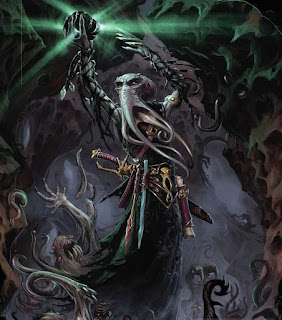 The world according to Mind Readers

Every creature looks like a chinese lantern, a shell full of dazzling light, illumination pouring out through any gaps or flaws in their body, along with through their mouth and eyes.  By "looking" into this light, you can feel someone's true intentions, emotions and feelings.  You can't tell what they are thinking, but if they are radiating anger while speaking to you in a civil way, you can probably intuit what is going on.

In the same way, Telepathy is a truly honest way of speaking.  You can't lie when speaking telepathically.  You can send a thought you don't mean, but your dishonesty, as well as your true feelings, will be plainly visible, as clearly as a stain on a pristine white suit.

So when a Mind-Flayer sees a person, it doesn't see a pest or a food source, it sees a precious treasure, a nigh-bottomless well of potential to capture and exploit.

Hell is other people

Let's take a quick detour and talk about the phrase "Hell is other people," because it probably doesn't mean what you think it means.  You see, there are two ways to be happy in this world.  Option 1 is that you can be happy as a creature, as a created thing, and submit yourself to your Creator.  Since this phrase originates in a Christian culture, that Creator is the God of the Bible, the God of Abraham, Isaac and Jacob, the great I AM, Jehovah, etc.  The second option, however, is to be God.  If you are God, you are complete, and able to order creation as you see fit.  However, this second option is impossible.  And you will find that out when you encounter another person.  For while you can order the world to your own satisfaction when you are alone, if you encounter another person, you find yourself standing face to face with a creature with the same creative capacity as you and the will as you.  This other person before you is irrefutable proof that you aren't God.  That's why Hell is other people.

This a problem the Mind-Flayers have in spades.  A Mind-Flayer can dominate lesser lifeforms and move matter with thought alone.  This means, on some level, Mind-Flayers can fool themselves into thinking they are powerful, and maybe even all powerful.  The only thing that can disprove this fact is something stronger than them, or another Mind-Flayer.

Thus, the Mind-Flayer species is divided amongst itself.  A good chunk of them live in the Mind-Flayer homeland, engaged in an endless, fratricidal civil war where various Hive Minds, each one a collection of Mind Flayers dominated by one Paragon of their race dominates other Flayers who in turn dominate members of other species each war for supremancy, engaged in an endless fratricidal game of 3D chess, with other species representing pawns and Mind Flayers representing more valuable pieces.  This war is likely to never end, at least not until only one Mind-Flayer is left alive; for as the saying goes, the path to utopia lies across an infinite sea of blood.

The second group of Mind-Flayers are scattered throughout the world, squatting in hidden grottos and forgotten nooks, pretending to be God. 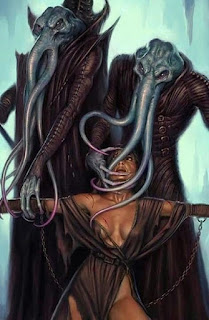 The Mind-Flayers and their living tools

The Mind-Flayer's lair is...
1d6
1- A hidden cave.  Inside the cave you will find a labrynth of tunnels leading down into the darkness, full of mind-slaves and booby traps.
2- A doorless, windowless tower with no stairs on the inside.
3- A strange ship from a distant land, wrecked on a familiar shore.
4- A hidden, subtly cultivated glade with a small, opague pond.  The lair is actually concealed beneath the pond.
5- An abandoned, crumbling manor in the midst of the wilderness.
6- A secret nook concealed inside an existing building.

Roll until you get a result of at least 16 on the table above, and at least, roll twice.

This process is actually why they earned the name Mind-Flayer.  They probably have some other name, but nobody cares about how they feel.

1d10
1- You encounter an abandoned town.  The town looks like it was attacked by a group of people on foot.  There are animals starving or having broken free of their pens, rotting rotting on tables and destroyed stuff everywhere.  Yet all the valuables were not taken.  If the players stay to investigate, they will be attacked by a group of enslaved townsfolk who attempt to capture them and bring them to the Mind-Flayer, to have their minds flayed.
2- As you are passing through the wilderness, one person sees a small child off to the side of the path, asking for help.  No one else sees them.  This child isn't actually real, but an image the Mind-Flayer is projecting into the person's mind.
3- One person in the group starts having recurring, seemingly prophetic dreams- urging them to go somewhere and do something. For example, go kidnap the king of a nearby city-state and bring them to a specific location.  However, this is not real prophecy, but the psychic orders of a hidden Mind-Flayer.
4- The players encounter a Wizard who is hunting a rogue Magic-User, who is guilty of the crime of using magicks to bewitch people.  The Wizard needs help though, because quite a few of the local people are being surprisingly resistant, for some reason, despite the Wizard's noble intentions and credentials.
5- A stranger presents you with a valuable treasure and orders you not to give it up.  This is part of the game.  Soon after this, assassins who are actually the mind-slaves of one of several Mind-Flayers begin showing up to try and take the treasure from you.  The first to get the treasure wins.
6- Upon stopping at an inn along a desolate frontier road, one of the players is dragged from their bed and taken to a horrific dungeon beneath the inn, where the Mind-Flayer begins working on destroying their mental barriers to enslave them. In this adventure, I would cut between two plotlines, firstly, the remaining players on the outside, seeking to find their companion before it is too late and secondly, the captured player fighting off the Mind-Flayer within their own mind, with the other players playing as mental amalgams of the captured player's memories and opinions about their characters.
7- The players, while traveling, hear rumors of a dangerous dungeon filled with treasure and terrible monsters.  However, this dungeon doesn't actually exist.  The rumors were psychically planted by a Mind-Flayer in the unsuspecting minds of these rural townsfolk.  If you go the dungeon, all you will find is a trap designed to recruit more mind-slaves for the Mind-Flayer.
8- The players stop in an isolated rural town for some reason.  However, this town just seems "off".  The people here don't seem quite right and they do odd things, as if they're all androids who can't quite mimic human behavior.  This is because the Mind-Flayer has actually enslaved the entire town.  The players will be encouraged to stay for longer and longer periods, all while the Mind-Flayer slowly chips away at their mental defenses.  If they don't escape soon, they will become willing tools of the town's true master.
9- A nearby King is dying and his courtiers are already jockeying, positioning themselves for when he dies.  However, among the courtiers and especially among king's many children, strange occurrences and accidents start occurring.  No one in the court trusts each other, but maybe a group of weird outsiders can be.  Can you find out who is secretly pulling the strings, before it's too late?
10- A Dragon is flying around, screaming about voices in its head.  The Dragon is alternating between begging passerbys for help and destroying everything in its path in a fit of petulant rage.  Calm the Dragon and try to discover the source of its madness, before it kills you and devours everything in its path. 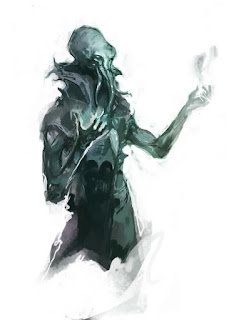