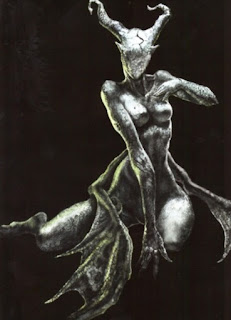 Faeries are what everyone thinks of when they think of the Folk.  Aloof, mysterious beings, capricious and inscrutable.  Not evil, but alien and amoral.  They cannot lie, and should never be trusted.  Never promise them anything or accept any gifts from them.  But that is all the true knowledge that an average person might know.  The rest of what they know about Faeries is probably wrong.

First, not all the Folk are Faeries.  Faeries are a sub-group within the umbrella term of the Folk.  They are the leaders and generals of the Folk, the courtiers who attend their Sovereigns.  They can shapeshift in limited ways and have strange powers, but they cannot lie.

Secondly, Faeries are nothing like you think.  They loathe civilization in all its forms, but most especially its higher concepts, such as language, mathematics and coins.  Goblins are degenerate in their eyes, and they freely abuse the little freaks.  They can speak almost all languages, but they hate to do so- it is a reminder of all they lost.  They communicate to each other through other, poorly understood methods.  But they will speak, if they must communicate with you.  But more likely they will just try to drive you away.

Thirdly, they do not like using any tools.  They would rather strangle you with their bare hands than bash your head in with a rock.  They do not wear clothes to protect themselves from the environment, and live in caves or burrows.  They do not use money.  They trade for or take what they need.  They respect only strength and force of will.  To them, laws, contracts and hierarchies of authorities are all worthless.  They believe in power, and nothing else.

When encountered, if they are not hunting, they will usually be alone or with an attendant.  When they hunt, they will sometimes go alone, but usually will have either another Faerie or their retinues with them.  These retinues usually consist of lesser Folk, mortals freed from the shackles of civilization, or Changelings.  However, on the subject of Changelings, something must be discussed.  The sexual proclivities of Faeries are well known, for even in the ancient past, young women were warned not to wander to away from the group, or they might be accosted by savage wild-men out in the wilderness, and young men were likewise warned of pursuing the naked, inhuman woman-thing you saw picking flowers on the edge of the woods.  And since they are quite clearly sexually libertine, they should be the same among their own ranks.  And yet, while Faerie-Human Unions sometimes result in Changelings, no reliable records indicate a union between two Faeries has ever resulted in a child.  And while this might indicate that the Faerie population is stagnant and in permanent decline, it might indicate something far less hopeful. Either way, the data is inconclusive, and must be researched further. 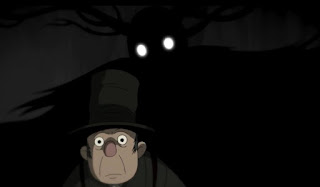 Dealing with the Faeries

First of all, Faeries do not have names.  They do not name themselves.  But Humans use their language, their words to exert control over the world.  So they usually end up naming any Faerie they come into contact with.  An unnamed Faerie hates to be named, or if they were already named, being called by that name.  Saying a Faerie's name is an excellent way to anger them, if you feel you've grown too attached to your internal organs.

<GM note>
Refer to the Faerie by something different every round.  If the players start to use a name for it, then use that name.</GM note>

As for their bearing, all Faeries are imperious and cruel, they look down on you with barely disguised contempt.  They might let you talk to them, or they might try to kill you for some imagined slight.  Your instinct will be to flatter them, but do not do this.  Do not bow to them, they will walk all over you if you let them.  Instead act a King, and if they challenge you, fight back.  Now it should be said, Faeries cannot lie.  But they are deceptive.  A Faerie who says they want to kill you and walks up to you, describing in great detail what it wants to do to your worthless hide is more trustworthy than a Faerie that smiles and is hospitable, while studiously not discussing his true feelings.  This is because the first is being honest, and the second is likely plotting your murder.  The first one might as well, but they are less likely to be a significant threat, since they're acting impulsively. 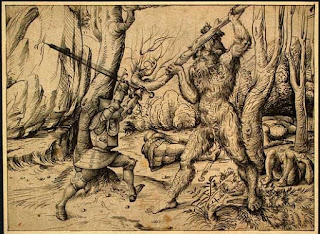 Don't do it.  Faeries never fight fair.  They set traps, ambush, and use hit-and-run tactics.  They will send their retinues in to lure you onto unfavorable terrain, then tear their way out of the ground or leap from a tree to disembowel you.  They never hesitate to retreat and will do anything to win.

And while Faeries do not use weapons like lesser Folk, their shapeshifting powers more than compensate.  While they are not as strong as a Demon's, as they can only shapeshift into certain forms, some of those forms are specialized for combat.  Most notably, they can shapeshift between a humanoid, "Female" form which is their normal form for dealing with outsiders or other Folk, and their "Male" form, which is primarily used for combat and dominance games.  Each "Female" form is usually very alluring, and each "Male" form is usually designed with intimidation and combat utility in mind.

And finally, here are 6 Faerie Nobles that your players can run into or get murdered by. 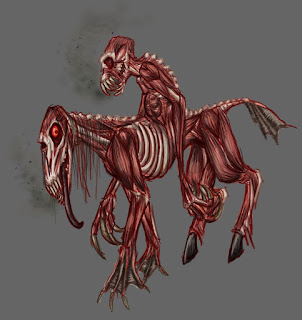 1: Tolkina
(female form)
- A woman with slightly translucent skin, pointed ears, and wild eyes.  Her grooming is terrible, and she smells of hot blood.
(male form)
- Her skin peels off to reveal a skeletal thing, covered in bone blades.  Every part of her body is sharp, with the translucent skin flapping behind it like a cape.  Her eyes are the same.  1d4+Bleed/1d4+Bleed (Bleed: save or take an additional 1d4 damage a round.  You must save after every hit.  And because her body is so sharp, touching her or grappling her counts as touching.

2: Manrider
(female form)
- A man with a shaggy beard and hair that was cut with a stone knife.  He's covered in scars, many of them self-inflicted.  Men who see him wil always end up feeling inadequete, even if they kill him.
(male form)
- He pulls himself inside out, transforming into something like a skinless centaur.  Sharp teeth to bite you and barbed hooves to crush you underfoot.  1d6/1d6 Teeth and claws or Trample 1d10

3: Anne Star
(female form)
- A nut-brown girl with hair like ink and eyes of solid, jet black.  She laughs but never smiles.  Her teeth are like that of a shark, and can bite through anything you could cut with an axe.
(male form)
- Mouths appear all over her body, with long, barbed tongues sticking out of them.  She can also spit a cloud of teeth, like a swarm of chitinous bees.  Barbed Tongues 1d6 (attack at range) or Tooth Cloud 3d6 1/day

4: Flowerchild
(female form)
- A weedy, scrawny young boy.  His face is spotted with acne, but instead of pustules, small flowers are blooming all over his face.  He's horribly embarrassed by this, but not by his nakedness.
(male form)
- The flowers begin shedding their petals, forming a cloud around him.  His fingertips open into flowers, and thorny vines heavy with flowers drape over him like jewelry.  He fires thorns from his fingers.  Each thorn and petal contains a powerful poison.  1d6+poison/1d6+poison.  Approaching him in melee combat will mean his flowers exasperating and accelerating any poison in your system.

5: Void
(female form)
- A burly man with skin blacker than the void.  His nails, palms and hair are a matching color.  At night, he is virtually invisible.  If you look into his eyes, you can see galaxies and distant stars reflected in them.  His teeth are the only part of him that isn't black, tiny squares of white floating in the air without an owner.
(Male form)
- He vanishes utterly, becoming a complete void.  While he does this, he is completely invisible and untouchable.  However, he cannot affect you while in this form.  He must slide partially back into our universe to hurt you.  When he does this, he looks like a three-dimensional shadow.  Hurting him in this form makes him bleed light.  You need to catch him while he's here, or he'll chop you into chutney.  1d8 damage on a hit.

6: She-Wolf
(female form)
- An alabaster woman, with flowers in her blonde hair and eyes bluer than robin's eggs.  She will invite you to sit with her, as tell her about yourself.  If you hang around for a while, she might go catch a fish or grab a snake.  It's at this point you'll notice how her lacquered nails are actually wedges of razor sharp ivory, capable of slicing clean through flesh and cartilage with the smallest gesture.  But of course, it's a little late for regrets now.  She will be very disappointed if you don't eat the raw meat she brought you.
(male form)
- A blond wolf, with a human head and hands tipped in brutal claws.  She could strangle you if she wanted to.  But she won't, she'll instead use the spurs on her backfeet and her claws to disembowel you, or cut your cartoroid artery.  The claws can pierce anything softer than kevlar, and cut flesh like its cotton candy.  Claws 1d6/1d6, and if both claw attacks hit the same target, she does +1d6 damage as she rakes you with her back claws.  Also, you must save or fall prone.  If you're prone, +1d6 damage to any attack.

*Also, if you want any of these Faeries to be unnamed so the players can name them, then feel free to do so. 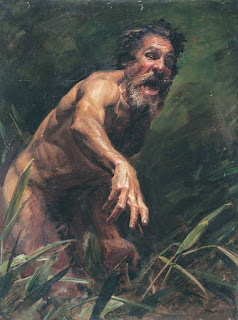