Boggarts are predatory, hungry Folk.  They are known for having dull black hides covered in slime that reflects the light of the moon and the stars.  Boggarts are strictly nocturnal, unlike some Folk, and only come out at night.  They are most active on dark nights or the night of the New Moon, when visibility is worst.  Their muzzles are long and pointed, full of needle teeth and long, forked tongues.  Males among their species have large frills that they unfurl in moments of great emotional stress.  The females do not possess these frills.  Both sexes are venomous, with the males spitting poison from their mouths and females injecting it through their claws.  Males also tend to slightly larger than the Females.  Additionally, Male Boggarts grow throughout their lives, getting larger and larger as they age.  It is reasoned that perhaps the reason for growth is status-related, though this is disputed.

Boggarts can speak, but do not, except in moments of grave importance.  When fighting you, they will laugh high-pitched, reptilian laughs or repeat your own words back to you, as a way of mocking you.  They are famous for yelling the battle-cry of an enemy right before attacking, just to startle their opponent.

Boggarts attack from surprise, engaging in lightning raids and disappearing just as fast.  Male Boggarts fight with icicle spears and nets made of spiderwebs, entangling someone and spitting poison in their face, then impaling them with their spears.  The females also use nets, but their preferred weapon is the atlatl, a spear-thrower that flings darts tipped with stone blades.  These darts do not do a lot of damage, but they quickly add up.  The females are also known to rub the tips of their darts in their venom. 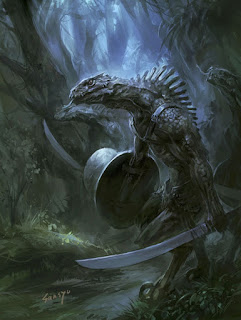 Net: When a Net attack is made against someone, they must succeed a DEX save.  On a failure, they are trapped beneath it can get -4 to AC and further DEX saves.  Additionally, anyone who touches the net will get stuck to it, and count as trapped by it.  The net is made of spidersilk but much, much thicker, and thus is harder than steel, but anything that can cut steel or someone with a Semblance with a power of +3 or greater could tear through it with a full action.

Venom Spray: Does 2d6 venom damage, DEX save for half.  If you are hit in the face with this, you are also blinded until you can flush out your eyes.  The venom causes vertigo, nauseau, and ataxia (loss of motor control).  For every dose of Boggart venom, you get -1 to anything.  Also, you take any damage from Boggart Venom, you will die in 120 minutes unless antivenom is administered.  API has antivenom of this nature.

Tactics:
- Protect the Females (if there are any)
- Tangle up enemies in your net
- Spit poison in their friend's faces
- Stab anyone left alive 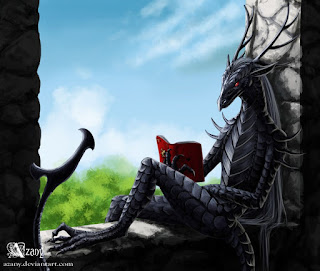 Tactics:
- Stay out of melee range
- Set traps with the nets
- Throw darts at anyone not caught in the nets
- Pounce on those people who are trapped in nets

But this begs a question- why do Boggarts do what they do?

Boggarts and the Front

Boggarts usually live in small groups, with a dozen or so females clustering around a dominant male, who is the largest male in the group, though he might not be the only one.

At first, it was thought that Boggarts attacked humans out of some predatory instinct, but this early theory did not hold up to scrutiny.  Boggarts do sometimes eat the people they kill, but not always.  Sometimes they take a few bites of them, just to prove they can- but they never eat the whole corpse or strip it of bone.  And the ferocity of their attacks also seems to dispute this.  They don't kill like they're hunting, as Boggarts attacks are always psychopathically violent.  It doesn't feel like the dispassionate kill of a hunter, it feels much more personal.

So this lead to the second theory- perhaps Boggarts attack Humans because it is some kind of courtship ritual.  Maybe the males attack Humans in an effort to prove their valor to the females, in the hopes of mating.  But this also doesn't seem to hold up, as all male and even all female groups are sometimes behind attacks on humans in rural areas.  So this theory is not as watertight as first believed.

The third, and current theory is this: Boggarts attack us because humans are expanding into their territories and their traditional nesting grounds, and thus they are trying to expel us.  And yet, if this is so, why do Boggart attacks occur all over the world, with no real consistencies in where they attack?  Moreover, why do Boggarts retreat sometimes?  Why the hit-and-run tactics if they have vital areas in need of protecting?

So as usual, the academics only have half-formed theories, and no coherent explanation.  And Agents of the Company are content to chalk the Boggarts seemingly random and inconsistent behavior up to the capricious nature of the Folk and leave it at that.

So rather then just throwing around theories, let's discuss what we do know.  We know that Boggarts, when they do speak, discuss things in military terms.  They talk about retreats, ambushes, withdrawals, etc.  When captured, Boggarts usually only rattle off a list of numbers, like they're a captured soldiers in a war movie.  This string of numbers varies from time to time, indicating that, since Boggarts cannot lie, they're just making this number up off the top of their head.  And we know that Boggarts often speak of "Stopping them here," and things of that nature.

Man is their enemy, clearly, and they want to stop us.  But why now?  And in this way?

But like I said earlier, we just don't know.

But do not fall into the trap of believing the Boggarts are not cunning.  To do so would be a mistake that is often fatal.  To see what terrible (for you) strategy the Boggarts are employing in their attack, roll 1d6 or invent something terrible yourself.

Baited Hook.  Attack someone and poison them, then promise them an antidote if they help kill you, or just let them "Escape".  Then when they go to ask for help, follow them sneakily and ambush whoever they first run into.

Pincer Trap.  Two groups of Boggarts will attack simultaneously, orienting themselves so to effectively attack one group you become vulnerable to the other.

Hammer and Anvil.  A group of Boggarts will be holding some sort of fixed position behind cover.  Then, as you attack it, another group will attack from behind to trap you against the fixed postion.  Also, sometimes instead of a fixed position they will use some kind of natural hazard, such as a wall of flames or a cliff.

Kill Zone.  This strategy is simplicity itself.  It is a trap within a trap.  First, one Boggart breaks off of the group and tries to lure an enemy into a pre-prepared area.  Then, once the enemy is there, the Boggarts ambush them or unleash their trap.  An example of a Kill Zone can be anything from a clearing with a tiger pit to a building soaked in kerosene, ready for a match.

The Humble Servant.  This is a strategy usually only employed by headstrong young males, but it has been known to work.  The strategy starts with a distraction, and while the attention of the enemy is occupied, a single chosen Boggart will approach the enemy by stealth and inflict as much damage as possible, before retreating.

Charlie the Poisoner.  This strategy is only used against an attacking enemy, when the Boggarts are on the defensive.  It involves luring an enemy away from reinforcements and onto their turf.  Then, once isolated, the Boggarts constantly make ranged attacks from distant, concealed positions.  They attack just often enough so that the enemy cannot run or come out of cover, but not enough to put themselves at risk.  They keep these miniature sieges going for as long as possible, and grind the enemy down.
By Yami Bakura at April 16, 2018