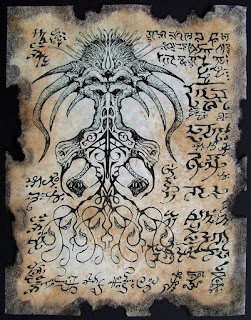 One helpful way to think of ideas is to think of them is that ideas are spiritual germs that infest the ecosystem of someone's minds.  For a time, an idea can proliferate through a mind, or many minds, before eventually fading with time.  A trend can overtake a whole population, then vanish just as quickly, as a new trend emerges to take its place.

And while some ideas are brief and ephemeral, leading nowhere or only remaining with you for a brief time, some are vastly more powerful.  Religions and ideologies can lead to the foundation of societies, incite wars, and change the course of history.  Consider that, a few stray thoughts floating around your head could one day change all of human history, and potentially save or destroy millions of lives.

But let's take it a step further. 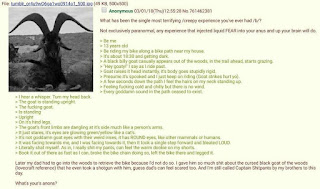 You can only learn about the Black Goat from someone who is also infected, whether by talking to someone who knows about the Goat, or reading some of their writings, or or seeing a picture of the damn thing.  This is not the only type of contagious idea- there are many, but this is one of the most virulent.  This is also why Agents of the Company avoid reading or watching anything they confiscate.  In some cases, the pen is truly mightier than the sword.

The Goat will turn, and you will see it has three eyes.  It will stare at you unblinkingly, and you will feel it thinking about you, for a single second, you will come face to face with the uncaring God who rules you.  Or maybe the Goat will speak to you in the voice of your long dead Mother, or it will reveal that it was cannibalizing a she-goat, tearing open the female goat's womb.  After it leaves, you can cut apart the she- goat and find a half-formed human fetus inside her.

Congratulations, you've just been inducted into the Black Goat conspiracy. 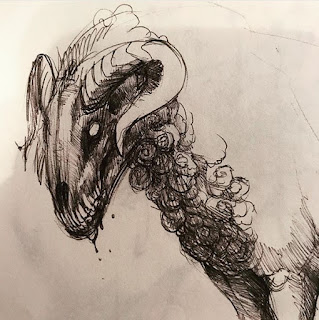 Now your eyes have been opened, and you see clearly.  For the first time, you see clearly.  You can hear the secret messages in the TV static, and feel the CIA trying to eavesdrop on your conversation through your dental fillings.  The stars spell out secret messages, and you receive prophetic dreams.  But you're not insane, it's too real to be simple madness.  And you're sure everyone agrees with you.  You don't act insane.

You can't, after all.  If you start acting like an utter nutball, they will find you.

Stages:
1: Aware.  You know of the Black Goat, but you have no idea what it is.  You also have little idea of what is going on.  Strange things that you never noticed are now happening around you.  Roll on the Black Goat Encounter Table at least once a session.  You can only advance a level in the Conspiracy by rolling a result that indicates so.
There is a 0-in-6 chance, if you are in a social interaction, that you are near one of your Brothers or Sisters, or that the person you are talking to is also in the Black Goat Conspiracy.

2: Involved.  You now are part of the Black Goat Conspiracy.  You will be tested, by both your Father and your siblings.  You will be hunted and sought by strangers and friend alike.  Roll on the Black Goat Encounter Table at least once a session, or once every time you are in the presence of one of your brothers or sisters.  You can only advance if you roll a result that indicates so.
There is a 2-in-6 chance, if you are in a social interaction, that you are near one of your Brothers or Sisters, or that the person you are talking to is also in the Black Goat Conspiracy.

3: Collaborating.  You are now one of them, body and soul.  When you die, Father will take you home.  But there is so much work to be done.  You must not stop, not now, things are reaching their most critical point.  You know this, but you may still have doubts.  And while it is not a sin to doubt, it is a sin to hesitate and not act when you need to.  If you fail to do as you have been ordered to, you will be killed.  Afterwards, black roses will be left on your doorsteps.
Roll on the Black Goat Encounter Table once a session, or near constantly if you are in the presence of one of your brothers and sisters.
There is a 4-in-6 chance, if you are in a social interaction, that you are near one of your Brothers or Sisters, or that the person you are talking to is also in the Black Goat Conspiracy.

Sub-Table A: Roll on this table when/if you need a person to give the players a secret message, try and kill them, or etc. 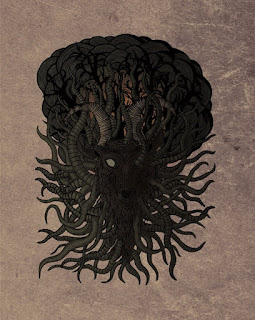 Once you have been selected by the Black Goat, you will encounter much more difficulty than one of the others.  But that is to be expected.  You are a Goat, crafty and clever.  You can escape a pen and evade a farmhand, while everyone else is a Sheep, too slow-witted to actually realize how thoroughly you are trapped.

Your Father, he will test you.  His instructions will often be unclear, as he wants you to rely on your own judgement.

But that is not the only difficulty to your new status.  The rewards for success are enormous, but the punishment for failure is equally incomprehensible.  As such, your Brothers and Sisters may attempt to destroy you, so you do not threaten their schemes and endanger their chances of pleasing father.  But they may also help you, as you are family.  But their help, is it any less dangerous than their violence?  Is it meant to lull you into a false sense of security, before they dispose of you?  Or is helping you all part of some greater scheme that you just cannot yet grasp?  You must know, you need to know!

Or maybe you don't.  Maybe you just need to get them before they get you. 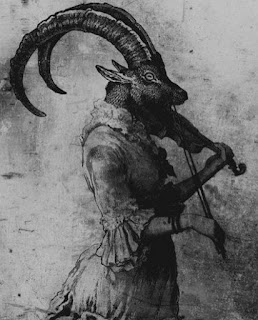 It is said you will see the Black Goat three times.  The first time will be when you meet him.  The second time will be at the moment of your greatest triumph.  The third time will be moments before your death.

Sometimes these deaths are the work of your Father, other times the work of Brothers and Sisters, or outsiders.  Sometimes they are merely accidents.  Or should I say, "Accidents"?

Do not attempt to avoid this fate.  Your Father sees you.  He knows your intentions.