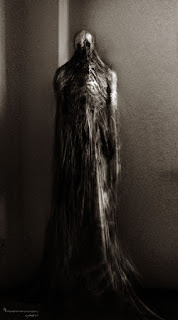 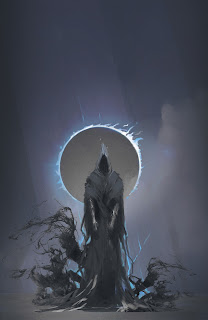 Ghost: The Splatter Man is a Ghost.  Along with being Undead, he can also fly and is intangible, so non-spiritual objects pass through him.  He is immune to damage from non-magical weapons.

Changeable Image: The Splatter Man can change his appearance, though this does not change his attributes.  He can also turn invisible, but he is revealed when he attacks or becomes physically solid.  However, even while invisible, he leaves signs of his presence.  Wherever he is or recently was, he leaves pockets of cold air.  He also carries with him the scent of blood. Additionally, he can be seen in a mirror, even if invisible.

Sunlight Damage: The Splatter Man takes 6 damage a round if he is exposed to sunlight.

Conditional Immortality: As long as the Western Watchtower of Fort Supine still stands, the Splatter Man is immortal.  If reduced to zero HP, he will be returned to life in 1d4 days, at midnight.  Only by destroying the tower can he truly die.  The one exception is if he is destroyed by sunlight.  This knowledge of what keeps him immortal is secret, but could be discovered through research.

Tactics:
- Possess someone weak, make them explode
- Separate someone stronger from the group and weaken them with 'Withering Touch'
- Don't destroy everyone, leave some alive 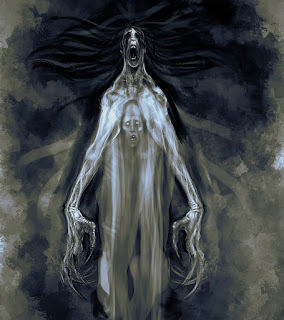 The Splatter Man is a name given to a famous Ghost, an Orzanian soldier who was part of an armed force sent to install a new Monarch over the vassal Kingdom of Turo.  Turo's previous King had rebelled, so after a savage pacification, one of his more loyal relatives was appointed by the Emperor to take the Throne and an army was sent to ensure that the new Monarch would receive no more trouble.

Unfortunately for the people of Turo, this new King was no better than the previous King, except perhaps in loyalty to his distant Master.  He was a debauched individual who loved money.  His soldiers and officials engaged in blatant theft under the thinnest of pretexts and his judgement seat was known to decide disputes based on who handed out the larger bribe.  This, along with the savage quality of the soldiers sent to guard the population is what caused Turo to remain a hotbed of anti-Imperial and anti-Government sentiment for decades to come.  Some say that this hasn't changed, even to this day.

The soldier who would one day become The Splatter Man was part of the force sent to install the new King.  In his time there, somehow, he died.  But for some reason, his spirit would not go to its rest.  It hung around, haunting Fort Supine, which had been destroyed in a failed revolt, or occasionally walking the streets of the nearby city of Zula at night.  The Splatter Man is known to kill by slipping inside someone's body and making them explode, splattering them across the walls.

These is one of the few known facts about The Splatter Man.  There is much more information on him, but most of it is contained in folklore or local myth.

If you ask anyone about him, they will say...

1d6
1- He was an Royal official, bloated and corrupted.  He had a habit of pressuring men's wives into sleeping with him, then using that to blackmail their husbands to comply with the King's agenda.  Eventually, after one of those wives publicly committed suicide so that her husband would not be shamed, the husband tracked down and slew him.  The husband's sword is said to be his only weakness and if it slays him a second time, he will be gone for good.

2- He was an Imperial official who loved money more than anything.  He recruited a gang of bandits to act as his private enforcers and had them confiscate goods under the thinnest of pretexts.  The King was too weak to stand up to him, so he was allowed to fill the rooms of Fort Supine with vast stores of plundered wealth.  Eventually, he was shamed by the Hero-thief, Akuna Manz Yorlo, the brave Frogling who crept into his bedchambers while he slept and took the gold caps for his tusks and the underthings of his favorite slave-girl, who was sleeping at his feet.  Shortly after, the King was forced to investigate the rumors and then forced to send the Imperial official home, who rather then be further shamed, slew himself, staining his ill-gotten gold with his blood, so that any who would come after would be cursed.  The curse supposedly comes in the form of The Splatter Man, who is said to kill those who attempt to cheat on their taxes or take anything from Fort Supine.

3- He was a soldier who was consumed by sexual sadism.  When he was permitted to, he left Fort Supine and walked the streets of Zula by night, hunting harlots and those who looked vulnerable, especially women and young, beautiful boys.  He would attack and brutally ravish such people.  However, though brethren knew this, they did not reveal this fact for they did not care how the local people, who were Human, not Orzane, were victimized.  Eventually however, when a mob formed and began randomly killing Orzanian men, his brethren realized something had to be done.  So they betrayed and murdered him, then mutilated his body and hid the pieces in the wilderness, where they were devoured by animals.  This put an end to him, or so they thought, because one year later he returned and slew his former comrades.  Now he stalks his old territory, hunting soldiers and those who remind him of the betrayers.

4- He was a patriot who sought to protect his adopted homeland from danger, but during a revolt, he was sacrificed by his fellow revolutionaries, who declared that Turo belonged to Humans, not to any of the other racial minorities who lived there. He was slain by his own racial brothers who had come to put down the revolt.  Now he seeks out dissidents, maniacs and revolutionaries to slay, to punish them for the sins of their spiritual fathers.

5- He was a noble soldier who did his duty and fell in love with a human woman.  However, while the woman was a cruel and spiteful woman who sought to use the soldier for her own gain.  She allowed herself to be courted, then abandoned him and married a rich man.  Then later, she tricked the soldier into murdering her husband, so she could inherit his lands.  When this happened, the soldier was so overcome with shame and rage that he attempted to slay her, but was killed in the attempt. He is said to stalk the streets of his city, hunting the descendants of the woman or women like her.  He is said to be provoked to blinding rage by the scent of jasmine, which was the favorite scent of his former lover.

6- He was a merchant who was caught in a love triangle with a woman and a rich man.  Eventually, he lost, because the rich man bribed the woman's family into pressuring her into marrying the rich man.  However, the woman still harbored affections for him.  She married the rich man only because she thought it would be better for her, but as she grew unhappy in the marriage, her affections grew for her former lover.  Then one day, she snuck away and convinced the merchant to elope with her.  But her husband refused to allow this and tracked them down.  He slew the merchant and took the woman back.  The merchant's rage and sorrow did not disappear into the ground with his body, however.  They returned as The Splatter Man, to exact revenge on those who abuse their position, power or money.

As for the Splatter Man's true origins, I will leave that up to you, gentle reader.

Plot Hooks:
1d6
1- The Splatter Man has become active.  A mysterious death indicates that the Ghost has returned and is killing once more.  Adventurers are scrambling to the city of Zula, eager to claim the glory of having exorcised the murderous shade.  The clock is ticking though- the Splatter Man is known to only kill a certain number of victims before disappearing for years or decades, only to return later.  This might be your one chance to finally stop him!
2- The haunted ruins of Fort Supine are said to be full of treasures from centuries passed.  But the Splatter Man hasn't been seen in years and the rumors of a curse on the fort is just because of his evil reputation.  We should go there and get rich!
3- A Necromancer or group of the same have come to the city of Zula and are disturbing the dead with their blasphemous magicks and rituals, disturbing the dead from their fitful sleep.  Ghosts of all sorts, most mundane or harmless have been seen wandering the streets at night, with some slipping into homes or causing mischief.  Find these Necromancers and stop them before they accidentally rouse the Splatter Man and unleash him upon us again.
4- A Sage has come to the city of Zula determined to finally locate the Splatter Man and destroy him once and for all.  Unfortunately for him, he's completely reckless.  If he doesn't get the help of the party, he will surely fail and will probably get himself killed in the process.  Additionally, while his theories sound cogent, he is totally wrong about everything.
5- A Morningstar Wizard is on a secret mission to the city of Zula to assassinate a number of officials.  He has either a magic item that he is using to make it look like the Splatter Man is actually the one behind it, or he is using the spell Release Me to do the same.
6- A cult has formed from some Wizarding college students with a charismatic psychopath as their leader.  Allegedly the group wants to "Conquer death for all time" and they plan to do this by resurrecting the Splatter Man.  The cultists are mostly just a bunch of young people who want to rebel against their parents and social norms and their leader is mostly using this as an excuse to get his sick kicks, namely torturing and murdering people for the sake of "research" and "progress".  Their project is likely doomed to failure, if they don't draw the attention of the Splatter Man first. 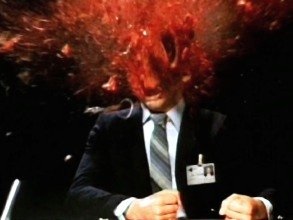