This is mostly stolen from the fabulous Joseph Manola, who first wrote this class here.  Go check out his stuff, he's brilliant. 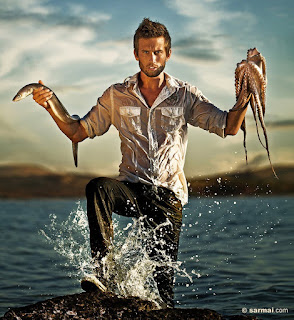 How to go from this...
by SarmaiBalazs

You probably come from an ancient, reclusive clan who lives along the sea, out on the frontier, far from more civilized, land-locked folks.  You likely come from a closed community, where fraternization with outsiders was prohibited.  You were likely not very wealthy, though not poor either.  Your family have been impoverished, surrounded by relics of its past glories while they prayed to catch enough fish to be able to make it through the winter storms, or you may have been a rural merchants who seemed to have an embarrassing amount of riches, especially for the lowly fisherfolk that you were.  In either case, your clan was strange.  You likely suffered from some form of hereditary disease, mutations that were carefully concealed, and many rumors.

But while the rumors were scandalous, there was no truth to them.  No one is your family ever made sacrifices to some terrible aquatic deity or invited dolphins into the bay to couple with them, as far as you knew.  The only strange things about your family was the webbed toes about half your relatives seemed to possess, the fact that your marriage was arranged, and the fact that an inordinate amount of your immediate and extended family seemed to drown or be swept out to sea, never to be seen again.  And of course, there was the locked door in the basement, which all who did not have the permission of the Matriarch of the clan were forbidden to enter.  It was unsafe, Grandma Tolly always said, and that had seemed reasonable enough to you.  At least, at first.

But one day, you realized something odd was going on.  So you set out, in search of the truth.  Unfortunately for you, the truth is about to find you. 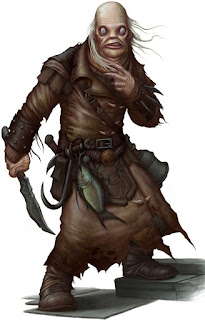 This is a class for playing a Deep One Hybrid.  It has a wide range of situational abilities, and would be very useful in a pirate game.  However, if your players want to play a Deep One Hybrid, make sure there is something for them to do.  For while they are not helpless out of water, they would be infinitely more useful near or in it.  So use with caution.

Additionally, a word on the status of Deep One Hybrids in Nukaria.  They are monsters.  If any group of peasants or educated folk saw a Deep One Hybrid past level 5, they would regard it as a monster to be drive away with pitchforks or torches, or an interesting specimen to be captured and studied or shot and dissected once it perished.  Deep One Hybrids before that would just be regarded as strange folk with weird faces and mutations.  To be pitied, but ignored.  However, if anyone saw how well they swam or breathed underwater, any educated folk would begin asking some very pointed questions.  Most smallfolk would just declare it an abomination against God and the Law, and try to fish the Hybrid out to skewer them.  Even Neutral people who understand that you can't always follow your principles in a rough neighborhood, metaphorically speaking, still have to draw a line somewhere, and when they see a person capable of breathing underwater with a deformed face and a jaw that can crush a coconut is usually that line.

Natural Swimmer: You have webbed feet.  This gives you a swimming speed equal to your running speed, and you can even swim in armor, though you'll still sink like a stone in plate.

Water Breather: Gills open on the side of your neck.  You can breath underwater.

Innsmouth Look: Your eyes become huge and bulging.  You can see in all but perfectly in low light, though not in perfect darkness.  Assume that if there is light, you can see.

What Big Teeth: Your Teeth become long and sharp, and your fingernails burst their beds transforming into claws.  You do 1d4 damage unarmed, and you can bite through anything one could cut with an axe.

Ocean's Consort: Your skin becomes rough and scaly, and you expand with the masses of muscle and blubber needed to sustain oneself in the depths of the Sea.  You deal +1 damage due to the increase bulk, and get +1 to AC unarmored.  It is now clear that you aren't anything remotely close to human, and you will be treated as such.  Expect angry mobs, priests rambling about prophecy, and Witch-Hunters and Paladins sniffing after you.  Of course, there will be those who are attracted to your transformed body, but whether or not this attention is a blessing or a curse is up to you.

Call the Cult: You intuitively reach out through your dreams to nearby unstable individuals, calling them together to form a cult of which you are the leader. Over the next few weeks, 3d6 crazy people (a mixture of 1st-level Fighting Men, Scoundrels, and Magic-Users) will arrive, and serve you with fanatical loyalty. Whenever one dies, an equally crazy replacement will turn up 1d3 weeks later. Each time you go up another level you gain another 1d6 cultists.

Lord of the Seas: You can communicate with aquatic and amphibious creatures and as a full action, charm up to X HD of them to do your bidding, where X is equal to your level.  You may do this until you have charmed up to X HD of creatures, after which they do not need to accept further orders.  Creatures that are charmed by you must obey any order you give them until you abuse them, or they are given an order they believe to endanger their own lives.  If you do either of these things, the creatures get a save to break free of your control.  However, if you do neither of those things, then your charm merely wears off as soon as you go to sleep.

Command the Formless: As Lord of the Seas, but you can now also charm Water Elementals, Slimes and Oozes.  However, charming these creatures also counts against the X HD, so you can only charm up to X HD of such creatures per day.

The Song of the Sea: You hear a song in your dreams that calls you to a holy place in a sunken city at the bottom of the sea. If you follow it, and complete the hazardous journey successfully, you undergo a final metamorphosis in which you shed the last remnants of your humanity. You cease to age, become immune to disease, and will live forever unless killed by violence. 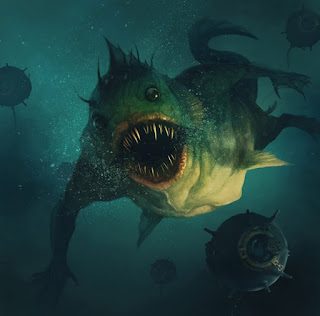 ...to this in just 7 to 20 game sessions (results may vary)
by BorjaPindado