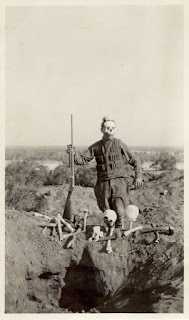 What is their Class?

1d20
1- Agent.  You have special magic power that slowly evolves over time.  A stand user, if you know what that is.  They need not work for the Company or any organization, so if you want to port them to some other setting, just rip out the fluff and port it to the retro-clone of your choice.
2- Alice.  The iron wall, the one stronghold that can never be taken.  A defensive class, that has abilities that allow you to easily protect your comrades.
3- The Allure.  Alternative name: Flunky.  A face class.  Useful for role-playing as a femme fatale or a Black Widow type.  Completely useless in combat.
4- Boxer.  A light martial class that hits hard but can't take a punch as well as the Fighting Man or Alice.  A Monk without the kung fu or magic.
5- Carnivore.  A Berserker, Barbarian, Screaming cyclone of rage.  Flip out and chew people's faces off, carry a big axe, take what you want, kick butt and never apologize!
6- Deep One Hybrid.  A race-as-class for playing as the unwitting spawn of a Deep One.  Can swim well, breathe underwater, and later form your own cult.
7- Fighting Man.  An OSR fighter.  Basic, with its focus on dealing as much damage as possible.
8- Gambler.  A combatant who plays dice with the devil and wins.  A half combat, half support class.  Only because they cheated, though.
9- Investigator.  Alternative Name: Scholar.  The one who knows stuff.  Mostly for translating ancient runes, identifying mysterious liquids, and challenging the Sphinx to a riddle contest while the Prophet desperately prays and the Fighting Man gets into position.
10- John Doe.  Alternative Name: Jane Doe, Noncombatant.  A class for people who don't want to fight, and want to play a runaway princess, kid sidekick, or normal person suddenly thrust into a dangerous situation.
11- Magic-User.  They cast spells.  You can find all my sub-types of Wizard here, or check out Mr. Kangaroo's excellent, curated list here.
12- Paladin.  You were chosen by Heaven to do battle against the infidel, the unfaithful and the damned.  Your powers come from your own mighty soul, but also from the will of your Master, who dwells far above (or below).  Comes with all the standard abilities- healing, smiting, blasting divine power at people, plus a whole bunch more fun stuff depending on what specific Master you serve.  Best of luck on your jihad, friend!
13- Problem.  Like the Magic-User, except with fewer spells, more HP, and you're slowly turning into a horrible monster.  If you really want to play up the fact that meddling with the power of magic makes you into a freak.  Transform into the monster of your choice, whether that be a Ghoul, cyborg or golden child of the Stars.
14- Prophet.  An OSR Cleric.  You know one of the Secret Names of God and can speak it to tear apart and alter reality at will.  This process is incredibly dangerous and likely to harm you, but that is the price of being called by the divine.  The costs can also be alleviated by sacrificing things to the Gods, so there's that as well.  If that one doesn't suit your tastes, you can try my first draft of this class, here.  Deus Vult!
15- Ranger.  A class focused on knowing what's out there/on the random encounter table, tracking those same things and then sneaking away from them.
16- Sage.  A Wizard without magic spells.  If you want magical powers, you're going to have to work for it.  Basically an Investigator for a Fantasy Setting, but cooler.  Also starts with a free Wizard Weapon.
17- Scoundrel.  An OSR Thief.  The face for dealing with criminals, the guy who has friends in every town, and the one who fights dirty.
18- Vampire.  Another race-as-class, but you're slowly turning into an Undead freak.  Slowly become unable to go out in sunlight, eat food or enjoy peep shows, but gain the ability to suck blood, regenerate and shoot high pressure jets of vampiric essence out of your eyes.  Just be warned, it's not worth it.
19- Werewolf.  You're a normal human in the light, but when the sun goes down, or when you go into a Dungeon, you can let your hair out and transform into a wolf-man!  And what else do you need to know?  Being a werewolf is awesome!
20- Reroll, if you please.

How strong is each member*?


*In NPC Adventurer Groups, each Adventurer has 1 HD per level, and they are led by the strongest one of them.

Why are they an Adventurer?

1d10
1- They love freedom too much to do anything else.
2- They were exiled from their homeland for a crime.
3- They are in love with someone who would never look at them unless they accumulated massive amounts of wealth, power, or prestige.  And since they were near the bottom of the heap, this was the only way to get that.
4- They are terrible at everything else.
5- They can't string together a sentence without collapsing into a pile of self-pity and nervousness.  They can do whatever their class is very well, but they can't order chicken nuggets at McDonald's.
6- They are insane in some very obvious way.
7- They are an outlaw, living outside the fabric of the law and society, and this is the only type of job they could get.
8- They are too narcissistic to cooperate with other, more sensible people.
9- They were/feel rejected by their original society for some reason outside their control.
10- They have some grand destiny or dream that they want to fulfill.


How free are they?  How were/are adventurers treated in their homeland?

1d6
1- Bonded.  They are actually the slave of someone else.  They may love their master, they may hate him, but they are not free.
2- Dogs of the State.  They work for the King.
3- Guild Adventurer.  They work for a large organization that controls almost all of their life, and takes most of their money.
4- Privately financed.  They have wealthy backers, but the yoke on them is light.
5- Self-Funded.  Their only obligation is to make a profit.
6- Murder-Hobo.  They go wherever they please and do whatever they want.

Is there anything special about them?

1d20
1- They have a minor mutation.  Examples include but are not limited to, six fingers, webbed toes, or single finger that's twice as long as the others.  They will likely try to hide this, or at least not draw attention to it.
2- Their eyes are bright blue or white and ultra-sensitive to sunlight and bright lights.  They wear thick lenses to protect their eyes for this reason.
3- They belong to a race the players have never encountered before.
4- They have a magic weapon.
5- They have an exotic pet.  Examples include but are not limited to a Hyena, Monkey, or a miniature horse.
6- They dress in a certain way that most would find inappropriate (overly sexual, overly modest, out of station, dressed like a villain (all black, leather, skulls, etc)).
7- They collect trophies from those people they killed.  They proudly display these trophies.  Depending on the area, this may be thought of as quaint, barbaric, or applauded.
8- They have a talking animal with them.
9- They have some kind of large deformity/major mutation.  They look like Quasimodo or something of that nature.
10- They have horns, fangs and a forked tail.  They may not be evil.
11- They have a halo, white wings that they usually keep folded up, and when they speak, they can make their voice boom and scream like a blowtorch.
12- They are shockingly beautiful, to an inhuman degree.  The type of person who can't walk down the street without getting a marriage proposal.
13- They are quite young.  They may try to make themselves look older, or play up their innocent appearance.
14- They are quite old.  They have grey hair at the least, and look like they should be preparing their legacy, rather then strapping on their armor to go down into another dungeon.
15- They're a strange color.  A Human with golden skin, or a Gnoll with neon blue and violet fur.
16- They constantly cause small magical disturbances around them.
17- Those who speak ill of them usually find themselves encountering sudden misfortune.
18- They're immortal.  Though you won't notice this until they get stabbed and shrug it off.  But they never seem to age.
19- They are never seen during the day.
20- They have a terrifying appearance.

Do they have any secrets?

1d20
1- They're badly addicted to some kind of drug.  The more illegal, the better.
2- They're actually a serial killer.  Every place they go, they secretly kill someone and dispose of the body.
3- They sold their soul.  They have to constantly sneak away to go meet with a shady character and do favors for this disapproving master.  They refuse to talk about it, and only the most severe censure will make them crack.
4- They are a cannibal.  They eat people.  They are also slowly turning into a Wendigo.
5- They are actually an Undead.  They refuse to go out during the day, never eat, and do not feel pain.
6- They're actually a Vampire.  At this point, they haven't made much progress, so the only noticeable signs are their pale complexion, their strange fixation with blood, and the fact that they try to stay out of direct sunlight.
7- They're actually a Doppelganger.  They killed this person and ate their brains, and are now wandering around, pretending to be this person.
8- They owe a lot of money to some really powerful people.  They will do anything for treasure.
9- They love abusing and demeaning people, and if they see any weakness from you, they will try to bully you into doing what they want.
10- They are being stalked by some kind of monster.  25% chance they know this, otherwise they are completely unaware.
11- They are cursed.  Consult your favorite curse table, or check out these options.
12- They are actually someone else the players might know, but in disguise, acting under a false identity.
13- They are subtly, but irrevocably, insane.
14- They are a Minion of the Dark Powers.
15- They are evil.  They also have some kind of evil plan that they are trying to implement, and will work at this, and will likely succeed, unless someone stops you.
16- They are currently wanted dead or alive for a crime.  25% they were framed.
17- They stole from a Dragon's hoard, and unbeknownst to them, assassins are closing in on them.
18- They are related to royalty, though distantly.
19- They are famous where you are from for something relatively minor they did.  Note that famous may not mean much if you're from a dirt farm in a hick town in the middle of nowhere, so they could only be a local story.  Or if they are higher than level one, they could be famous throughout your whole nation, but somehow they are unaware of this fact.
20- They are on a quest to kill someone very powerful.  This could be an Outsider, someone politically powerful, a strong NPC or another Adventurer.