API: That Which Should Not Be

Part 1 is here
Part 2 is here
And if you want to make your Outsiders really hard to kill, check out the unofficial part 3.

First, a note.  Arnold K., a long time ago, made a brilliant suggestion.  Demons, Angels and Spirits are all composed of the same substance, just as a butcher, baker and candlestick maker are all humans, and merely have different jobs.  Similarly, Demon, Angel or Spirit are just vocations or roles, and while they differ in their duties, all three of those creatures are of the same essence.

Secondly, in my works, Demon just means "Bad Outsider".  If a strange being from outside our universe crawls through a hole in reality and starts pinching the heads off of bears, it is a Demon.  Similarly, if it starts blessing children and spouting prophecy, it is an Angel, which just means "Good Outsider".

And with that clarified, on with the show! 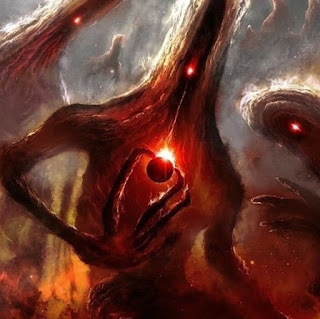 *Unless killed by a magical effect or weapon, their soul is merely expelled from our universe, and they can return at a later time.  They know this, and thus shun magic, magicians, and others like that.  They might allow themselves to be killed with a non-magic tool if faced with a greater danger.  Other Outsiders count as magical.

Rules for the Multiverse:

- Space is big, really, really big
- Earth doesn't matter in the grand scheme of things
- Outsiders generally regard you as beneath their notice, unless you interfere with them
- Only weirdo outsiders want to talk to and communicate with humans 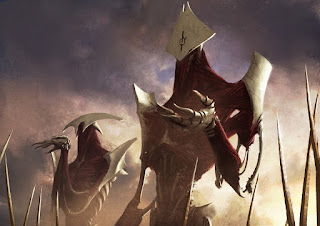 Earth, or whatever planetoid your favorite RPG setting takes place on, is a cosmic backwater.  There are millions of dimensions/universes out there, and almost all of them are more interesting then ours.  Humanity and the like is relatively insignificant, equivalent to a bunch of squatting primitives who have never had any contact with the greater universe, and as such, throw spears at helicopters and kill travelers who accidentally wander into their territory.  If you were an Outsider traveling across the universe, Earth wouldn't be on your map, though you might find it being whispered about in some seedy bars as an wild and terrible place, though it wouldn't live up to the rumors.  In essence, Earth is the equivalent of a seedy gas station on an infinite highway, with terrible bathrooms, an unfriendly staff, and they only sell terrible, sandwiches made with third-rate bread.

Similarly, just as Earth itself is all but irrelevant, Humans are little more than slightly advanced animals compared to almost all Outsiders.  Outsiders are creatures made of pure thought, pure liquid consciousness.  They can change their shape at will, as their flesh is a mere suggestion, an extension of their minds.  Humans cast magic, Outsiders are Magic, but with will.  They are simply greater than us, in the same way a Human society possesses infinitely more complexity than the primitive structure of an ant hill.  We are to Outsiders what Ants are to Humans.

But at the same time, while the Earth is full of nonsensical beings and located in an absolutely isolated corner of the cosmos, it is not without its uses.  The very isolation and crudity of its inhabitants can be a great benefit for any Outsider willing to bear with an enormous downgrade to everything.  If you can bear the thought of being contained in a shell of meat while you are here, breathing the same air as millions of other entities do, then Earth can be quite useful.  As such, an Outsider can find Earth very useful.

Roll below to see why this Outsider has come to our Planet.

1d6
1- A victim of magical abduction.  They were summoned here by a bunch of incompetents.  50% they killed the summoners out of irritation, and 50% some of them are still alive, though the summoners are still terrified of the Outsider
2- A criminal element.  They are a criminal on the run.  25% the Outsider equivalent of police show up to apprehend them and try and take them hostage, 75% they escaped.
3- A tourist.  A dopey, sheltered traveler.  Not as dumb as they look.  You'd have to be pretty smart to get this lost.  And they are lost. They will ask you for directions to places you didn't even know existed.
4- A child.  They ran away from home.  Parents will be here soon.
5- A soldier.  A deserter from some incomprehensible army trillions strong.  Others will arrive soon, looking for them.  50% chance they are the soldiers allies, 50% the soldiers enemies, hunting for strays.
6- A madman.  Every day they are here, they have a 20% of suddenly leaving, vanishing into the void, never to be seen or heard from again.

The nature of Linear Time

Outsiders do not merely come from other worlds like ours.  They come from higher realms, and as such, have higher minds then us.  Their consciousness is not limited, constrained to the shackles of meat and blood and bone.  They can float through space as an astral spirit, touching nothing yet seeing all.  This liquid consciousness of theirs means that they know things about our Past, Present and Future.  They can arrive before big events are going to happen, excited to witness them for the first time, and if they talk to someone, they will likely know a lot more about that person then that person is comfortable with, such as the exact date of that person's death, their last sexual partner, and what their first word was.  They will freely disclose such information, and will be surprised when you don't seem thrilled by them knowing the following.

There is a reason they do this, by the way, and it's not just because most of the Outsiders who come to Earth are weirdos. The reason is because to an Outsider, the sharing of information is a way to establish a bond, a sign of trust and friendship between individuals.  The idea that certain pieces of information are not worth sharing or remembering is utterly alien to them.  Additionally, ways that mortals show affection for each other, such as pair-bonding, flirting, and sharing of food are all likely to provoke insincere interest or feigned impassion.  Other things mortals do, such as eating, defecation and sexual intercourse are likely to provoke disgust from an Outsider, unless they're a real sicko. 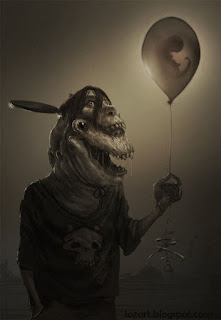 That which should not Be

However, for as poorly guarded as our planet is, it still has its defenses.  Those who attempt to enter our universe without permission will suffer for it, for as they enter, they tear the very fabric of reality, causing distortions in our universe.  Whenever an Outsider arrives, roll 1d20 below, or have something equally strange and eerie happen.  This effect lasts for as long as the Outsider is here, and diminishes when they leave.

Most Outsiders don't stay long, just long enough to prove their point then leave.  For any Outsider that stays longer then a day or two, just have reality start breaking down in the area around them.  For an idea of what this looks like, see here.

Distortions of the Fabric of Reality
1d20
1- Statues, and pictures of people start to weep blood.
2- All food is suddenly swarming with maggots and weevils.  Any liquids that can be drank (water, alcohol, etc) become undrinkable.
3- All water within 1 mile turns to blood.
4- The wind picks up and begins shrieking and howling.  Winds rattle in their panes, loose objects are flung around, kites are yanked out of the hands of children and etc.  Play up how the wind sounds like a scream or a wail.
5- Clouds gather and acidic rain starts to fall.  The acid does no damage, but it burns and irritates the skin and damages buildings, paint and statues.
- The wounds people are about to receive appear on their bodies
6- The lights go out, and all electronics fail or malfunction in spectacular fashion.  Analog devices are fine, but digital and electric devices are destroyed.
7- All radios and phone lines stop working.  Picking them up or listening to them only lets you hear a specific phrase being repeated over and over.  TV and streaming services also stop working, instead playing distorted clips that have surreal hidden messages in them.
8- Mysterious graffiti starts appearing all over the walls, in the margins of papers, and written on people's bodies in pen.
9- People's reflections become distorted and disfigured.  Looking at the altered reflections too hard causes the mirrors displaying them to crack.
10- You suddenly forget the last 1d10 minutes.  For the players, skip ahead to the next room, and pick up as if they had just been playing for the last couple minutes.
11- Time begins to move at an accelerated rate.  This effects only the local area, but the players won't know that.  Living beings age faster, watches begin turning faster, and natural processes accelerate.  A cloth that gets wet from the rain will seem to dry in minutes, and days will take only hours.  This rate also accelerates the longer it is allowed to go on.  First time will move at double speed, then triple, then etc, and etc.
12- Strange music begins to play from an unknown source.  It can be a relevant song from in-universe or something ethereal and alien sounding, produced on toxic, forbidden instruments.
13- Hallucinations overlay reality, transforming this current location into one formed out of the character's memories.  The characters are suddenly children exploring their grandparent's basement, or they are back in school, hiding from the school bully.  This area is a mish-mash of all the character's memories, so it should be disjointed and odd.
14- If there are any corpses within a mile, they rise from where they have fallen and begin to cavort and dance with each other, engaging in a silent, forbidden dance.  Anyone who attempts to stop them is attacked with deadly force and forced to join the dance.
15- Animals begin to speak, babbling in languages both human and alien.  This doesn't make them more intelligent, just gives them the ability to voice their inane thoughts.
16- All prey animals within the area sense the arrival of a greater predator, and behave accordingly.  Birds stop singing, small animals hide, and you see larger creatures fleeing through the open.  A deer sprints by, you see a brood of rabbits hiding under a fern, horses start kicking on their stalls, etc.  Domesticated dogs and cats start barking and yowling, and if let loose, flee.
17- A delectable, pungent or strange odor fills the air.
18- One door within this location now leads to an alien world, a distant dimension, or an alternate universe.
19- All within range must save or become overpowered with some incredibly strong emotional urge.  This can be fear, happiness, rage or anything in between.  Those who save are unaffected, though they can still feel the Outsider's presence weighing on their minds.
20- The sky suddenly changes, altering to have two suns, or display strange planets or constellations that have never been seen in the sky before. 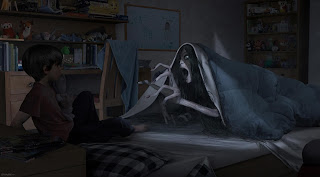