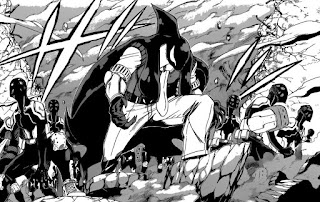 These are the Candle Pirates.  They are a troupe of thugs who cavort wherever pirates would be appropriate, traveling aboard their ship, the Laughing Maid.  They are not famous or well-known outside of the local area, but there are rewards for pursuing them, though unless the players are low-level, in the area, or already have an axe to grind, they are probably not worth the effort of hunting down.

Weapon Loadout: If you're in a setting with guns, at least one member will carry a personal firearm (flintlock pistol 1d8, then requires a full action to reload).  If not, all the Pirates will be armed with bows(1d6+STR ranged) and scimitars (1d6 sharp).

Tactics:
- Swarm the strongest person
- Use maximum brutality
- Kill anyone who resists, but give them a chance to surrender

In my system, Pistols do 1d8 damage and long guns do 2d6 damage.  However, guns don't work against AC.  Instead, when you fire as an action, the target must make a saving throw.  The effects of this save depend on the range.

Referee's discretion on what counts as what range.
</Note>

Tactics:
- Steal the glory for yourself
- Challenge people to duels
- Flee at the first sign of real danger 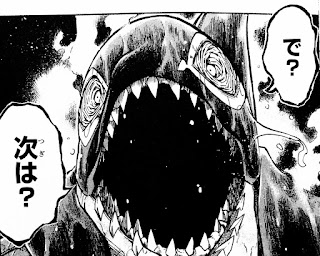 Jawbone is the ruler of the Candle Pirates.  He is an orca-man, a killer of whales and men alike.  He stands at eight feet tall (243 cm) and is immensely heavy.  He is strong and large enough to wield a weapon that a normal man would require two hands to wield, carrying around a greatsword like its a dirk or dual-wielding battleaxes and throwing them like hatchets.  He is also a powerful swimmer and is said to be unbeatable in the water.  He can hold his breath for up to a half-hour, and it is said that he can bite through steel with his enormous teeth.  This is true, though Jawbone prefers to fight with weapons, and usually only bites captives as an intimidation tactic.  Additionally, he is so fearsome looking, most surrender immediately upon seeing him.

Weakness: Jawbone never backs or declines a challenge, except ones that are clearly and obviously suicidal or impossible.  For example, he wouldn't jump off a bridge if you told him you thought he couldn't, but he might fight you one-on-one if you told him he was too weak to do it.

Giant Size: Jawbone takes -1 damage from bullets, arrows and ranged weapons due to his rubber hide, as well as any weapon not designed to kill something his size.

Great Strength: Jawbone counts as having STR 18(+3) for the purposes of STR checks and saving throws relating to STR.

Grappling Master: Jawbone's superior size and strength give him +4 to all grappling checks, both to escape and grab someone.

Whale Killer Karate: Jawbone can fight in the water as if it was air.

<Note>
All weapons do -4 damage underwater, unless they are thrusting weapons (spears, tridents, etc).  Blunt weapons do no damage unless someone is ludicrously strong, and all ranged weapons not designed to work in such an environment (bows, crossbows, firearms) are useless.
</Note> 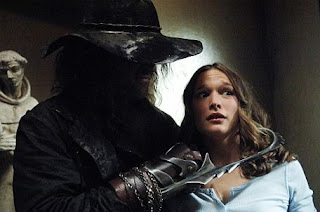 A Human, and Captain Jawbone's first mate.  A selfish, cruel man.  Hobie is completely lacking in scruples, and willing to do anything to win.  He got to where he was by all those above him either declining Jawbone's offer of further promotion or suffering mysterious accidents, usually on the battlefield.  This had given Hobie a reputation almost as dark as Jawbone himself, a fact that neither of them are comfortable talking about.  Hobie and Jawbone have a turbulent relationship, to say the least.  Jawbone knows that Hobie is a back-stabber, and is not pleased that quite a few of his subordinates have mysteriously disappeared when they crossed Hobie.  But at the same time, Jawbone knows Hobie is too strong to get rid of, and thus there is currently a state of uneasy peace between the two of them.  However, Jawbone would easily give up Hobie or sacrifice him if Jawbone thought he could get away with it.  Hobie on the other hand, knows that Jawbone suspects him of many things, but does not have any proof.  And Hobie is too powerful, many of the Candle Pirates owe him debts or favors or are simply reliant on his strength for Jawbone to destroy without tearing the whole crew apart.  However, Hobie also knows that if he slips up, Jawbone will turn on him.  But he also knows that if Jawbone slips up or dies or suffers some other unfortunate fate, he will be the optimum choice to take over as Captain.

Weakness: Hobie is a cutthroat, and everyone knows it.  If he were in danger and needed help, but helping him might risk the rescuer's life, there's no one among the Candle Pirates who would actually try and help him.

Atk: Hook 1d6 and Pistol 1d8 (or Crossbow 1d8, if you're setting doesn't have firearms) 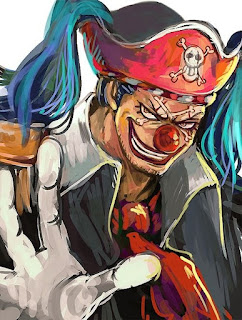 He was a royal fool, kidnapped after an unsuccessful raid on a King's ship.  At first, he merely entertained the crew with magic tricks, crude songs, and his juggling.  Soon he became one of the crew, and joined them on a few raids.  It was here that Laughingstock learned that he not only liked to fight, but also that he was apparently very good at it.  Since then he's become a feared and deadly member of the Candle Pirates, known for his love of comedy and throwing knives, as well as his deadly aim.

Weakness: Laughingstock cannot resist laughing at a joke, no matter how bad it is.  When he's laughing, he cannot aim properly.

Clown: Laughingstock counts as a Clown for all intensive purposes.

Don't turn your back on the body: If there is any possible chance of Laughingstock to escape death, he does.  If he is shot but falls off the ship into the sea, he lives.  If he is stabbed but manages to limp away, he does.  Only a certain death, such as decapitation or being shot repeatedly at point blank range while being observed by multiple witnesses will kill him. If he is not reduced to zero HP using one of these methods, he will return. 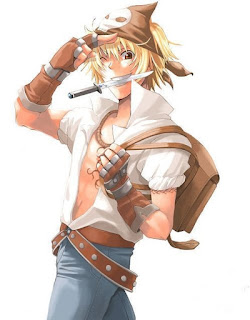 He was just a young pick-pocket who was shanghaied.  Soon after, he realized that a pirate's life is not nearly as fun as the stories about it suggested it would be.  As such, he just wants to go home.  His parents probably think he's dead by now. He is not much use in a fight, being only a 1 HD Pirate (the same as other faceless members of the Candle Pirates).  He's scared of Hook Hobie and Captain Jawbone, but he's terrified of March Ides.

Weakness: Percival is nothing but weaknesses.  However, if he had one major one, it would be that he is a coward.

Lucky: Percival is really lucky.  If good luck can earn him a positive outcome, it will.  This won't protect him from something luck has nothing to do with, like being killed by a more powerful fighter, but it is good for surviving high falls, being rescued by friendly strangers, and gambling. 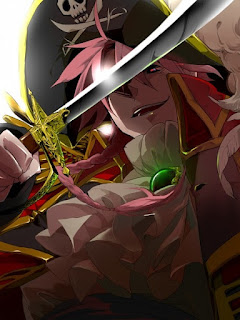 A young woman, starry-eyed and full of passion.  She loves to fight, and is a skilled and talented swordsman.  She is said to be the third strongest in the Candle Pirates, though she and Laughingstock have never actually fought.  She is generally odd, possessing few social skills and being, let's say, obsessive.  Her three obsessions right now are rubies, swordplay, and Percival.  She is desperately in love with him, a fact obvious to everyone, especially Percival, though he pretends to not notice her feelings.  This is because Percival knows that Ides is obsessed with him, and he suspects she is planning on doing something unsavory in his general direction very soon.  She is, though whether she's going to rape, imprison, or kill him is a something that is a mystery to all but her.

Weakness: March Ides is desperately in love with/obsessed with Percival.  If she thought or saw he was in danger, she would immediately rush to his aid.

Parry: Once per round, Ides can reduce any succesful attack's damage against her by 1d6+2.  This only works on things she could use a sword against.

Heron Strike: If you engage Ides in melee combat, every time you miss, you must make a saving throw.  On a success, nothing additionally happens, but on a failure, you are disarmed and your weapon goes flying away.

Master of the Sword: For every additional person other then the first one who is fighting Ides in melee combat, Ides get +1 to-hit and does +1 damage on a success, but to a maximum of (+7) for to-hit rolls and (+4) for damage rolls. 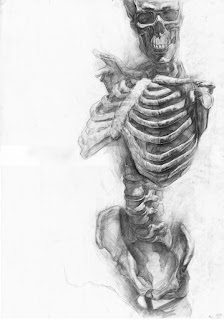 Skin Taker isn't really a member of the Candle Pirates.  Yet he is clearly a presence.  Most of the crew have convinced themselves that he is nothing more than a ghost story, one that they love to tell prisoners, guests and new recruits alike. They have learned to ignore the strange noises coming from empty rooms in the night, and not notice how sometimes prisoners die mysteriously in the brig, suffering a hideous, drawn out death.  Those who seek out the truth behind those strange happenings never seem to return, so they have learned to deny and ignore.  But if you got them into a place where the Candle Pirates were sure no one was listening, they would tell you Skin Taker is no myth.  The Laughing Maid, it was his ship before, and it will still be his long after they're gone.

And they're right.  It is his ship, and Skin Taker is very real.  He is a ruthless monster that haunts the Laughing Maid's halls, killing who he wishes and sparing those who please him.  Victor Hobie is unaware of this fact, and suspects that Captain Jawbone is merely perpetrating these acts, then blaming them on a phantom.  But Jawbone knows the truth.  Skin Taker sometimes appears in his chambers in the dead of night, to give him orders.  Jawbone is not the captain, not when he is around.  Skin Taker always takes on the same form, a human skeleton in a top hat and fashionable cloak, both made of tanned human skin.  Skin Taker always has an order, a question, or a request.  He has his own agenda, and Jawbone fears that he is merely a pawn in some scheme much larger than the Candle Pirate robbing a few merchant ships and making off with some government gold.  This would be a troublesome fact, as pawns are not known for their longevity.

Weakness: Skin Taker cannot just kill someone, but he loves to inflict pain, so he will always hunt and kill in the slowest, most painful way possible.

Skin Taker is a Gentle Beast, with this extra ability.  Use the tables to generate a statblock for him.

Besides the base Gentle Beast abilities, Skin Taker has one more.

Flayer: Skin Taker, on a successful hit, instead of dealing damage, can choose to flay the skin off part of his target's body.  He needs to be able to see at least part of the skin to do this.  This is extremely painful, and does 1d6 CON damage, as well as taking the skin off the affected area.  If there is anything touching that area, the subject immediately takes 1 damage, and they cannot use flayed areas for anything.  Additionally, if the CON damage dealt by this ability ever equals or exceeds someone's CON score they collapse onto the ground, unable to do anything (and they start dying).  Any spell that can heal HP can regrow someone's skin.  However, anyone who took enough CON damage to equal or exceed their CON score will be left with this conviction: "I am terrified of the Skin Taker, and will never fight him again." 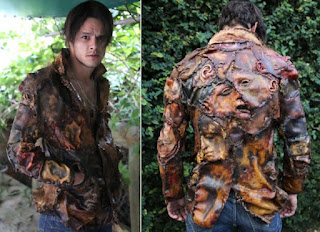