OSR: Bearers of the Word "GOD"

This is my second attempt at an OSR Cleric.  I wanted to differentiate my Priestly class from Magic Users more, and I was thinking a lot about Kill Six Billion Demons and Arnold K.'s The Paladin of the Word, and so this is result.  I highly recommend reading both of the works mentioned above, they're both quite good.  You can also read my former take on the Prophet, if you choose.  Find it here. 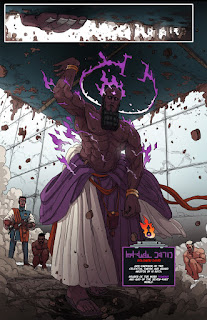 "The Things said most confidently by advanced persons to crowded audiences are generally those that are quite opposite to the fact; it is actually our truism that are untrue.  Here is a case.  There is a phrase of facile liberality uttered again and again at ethical societies and parliaments of religion: "the religions of earth differ in rites and forms, but they are the same in what they teach."  It is false; it is the opposite of the fact.  The religions of the earth do not greatly differ in rites and forms, they do greatly differ in what they teach...almost every great religion on earth works with the same external methods, with priests, scriptures, altars, sworn brotherhoods, special feasts.  They agree in the mode of teaching; what they differ about is the thing to be taught.  Pagan optimists and Eastern pessimists would both have temples, just as Liberals and Tories would both have newspapers.  Creeds that exist to destroy each other both have scriptures, just that armies that exist to destroy each other both have guns."

All Gods have Temples, and All Temples have Priests.  These are holy men, their bodies sacred.  They stand with the King, they support his rule.  All Kings are foretold by miracles, but who studies and confirms these miracles but the Priests?  Who asks the Deity to provide the miracles in the first place?  Who tells the people and the aristocracy what their God commands?  When famine comes, who is the one responsible for removing it?  When plague comes, who must address it?  Kings and armies are useless against the Gods, for even if soldiers could harm their God, they would not.  They would throw down their arms and turn over their own commander, rather than lay a hand on their God.  The Priests are the same way.  It is a crime to touch the King's body without permission, but to do the same to a Priest is not only a crime, but a sin.

But you are not a Priest.

The Secret Names and Voices of God

The difference between a Priest and a Prophet is two-fold.  Firstly, Priests are expected and required to sanctify themselves.  All Priestly offices have restrictions.  These restrictions depend on the sect and religion, but they all exist.  For example, Moon Ministers of the Church of the Moon cannot sleep under a roof on a clear night, though they are permitted to have a shelter, as long as it has a roof porous enough to allow moonlight through.  They can also not eat any animal that is strictly diurnal, as such beasts are favored by the Sun.

Prophets are different from this.

Priests attend to the needs of the God and the People.  They serve for a lifetime.  Prophets are not so special, however.  Prophets are draftees into a Divine Game, where a lesser piece is promoted to the status of Divine Herald.  While Priests usually come from special blood-lines or specific circumstances, the only credentials a Prophet needs is to be chosen.  Prophets may serve a lifetime or for a single mission, whatever their Deity requires.  They are Divine hatchetmen, fixers and trouble-shooters.  For this reason, among others, Prophets are rarely raised up in a time of peace, only in times of turmoil or strife.

The other big difference between a Priest and a Prophet is the Secret Name of God.  A Prophet is someone who was taught one of the Secret Names and Voices of God.  For you see, Gods, when they speak to us, use an elevated dialect called the Holy Tongue, the language that they originally taught to us so we could communicate with them.  It is said everyone spoke it in the past, but now is a mostly dead language, only used by the most pious of the aristocracy and the Priests.  The Gods can also speak other languages though too.  They seem to only speak the Holy Tongue in public, and few actually have the chance to speak with a God directly, but those that have assure us that the Gods are perfectly comfortable speaking other languages.  But Gods also know another language- these are the Voices of God.  Some also say that these aren't actually words at all, but the Secret Names of the Gods themselves.

The Voices of God have Power.  To merely speak one is to bend reality to your whim, to alter it.  When a Deity begins speaking with one of its Voices, the ground cracks, clouds boil in the sky, time stutters and momentarily reverses, and dying animals laugh as the entire universe quakes.  This is why the Prophet is feared, for they were permitted to use one of a Deity's Voices.

To empower a Prophet, Prophets are loaned one of the Secret Names and Voices of God.  They are then sent out into the world to do battle with the Deity's enemies, and serve as the Deity commands.

Voice of God: The Prophet may speak with one of the Voices of God.  They may do this at will, but each time will incur the penalty associated with the word.  At any point, the Prophet may pray to their Deity and ask for another Voice.  The Deity will usually honor their request, and gift them one of their other Voices.  A Prophet may only have 1 Voice at a time.

Dreams and Omens: God will tell you where to go and what to say in signs and visions.  He may also grant you visions of the future and hints about where you should go and what you should do in dreams.

Whisper: You gain the ability to whisper one of the Secret Names of God into someone's ear, so it only affects them.

1 Free Use: You may use the Voice of God without sacrificing anything or incurring a penalty once per day.

Second Voice: You gain the ability to carry two of the Voices of God at once.

Choir of Voices: You gain the ability to speak with two Voices at once.  This can result in both effects occurring, or one enhancing the other, or anything else you can get the Referee to agree to.  You will need to make both of the normal sacrifices, but doubled.  Ex: You needed to sacrifice a bull, so now you need to sacrifice half a herd.

1 Free Use: You may use the Voice of God without sacrificing anything or incurring a penalty an additional time per day.

Shout: You gain the ability to increase the power of your Voice, so that you can speak to a large crowd or group of people.

Third Voice: You gain the ability to carry up to three of the Secret Names of God.

The Choice: Your Deity appears before you and offers you a choice.  This choice will be different for every Prophet, and will usually come either before the hour of their death or their darkest hour.  Each choice depends on the Deity offering it, as well as what the Prophet might want or need.  They will always be irrevocable and bring lasting change to the Prophet, as well as to the whole world.

Examples of The Choice:

1d6
1- Death comes for all men, but maybe, you are the exception?  You die, but all those people you love live.  Or, you live, but this action unleashes a catastrophe that causes many people you love to die, though some will survive.
2- Are a puppet of Fate?  I offer you this bargain: you can either be forgotten here, today, and escape the cage prepared by Destiny, or you can walk willingly into its trap.  To be trapped by Destiny is not such a bad thing, you will have anything you desire.  Just know that Empires are built by men, and thus share the fate of all Men.
3- Do you desire goodness, justice, mercy?  You will have an opportunity soon to see it meted out.  However, if you do so, you will be hunted until you die, maybe slowly, maybe hideously, but certainly violently.  Or you can keep silent, and allow the guilty to walk free.  All you need do is speak up.
4- Will you be remembered forever?  A child has been born near here.  When this child grows up, they will surpass you in all ways, and be remembered for far longer than you.  To stand against the Priest-Child is folly, for by the time they grow up, you will be too weak to stop them.  So what will you do?  Will you allow what you've done to be forgotten, great as it is, or will you go and silence this rival before they are old enough to resist you?
5- Do you love me?  If so, hear my words and obey.  There is a (city/people/king) near here that has rebelled against my authority, breaking the covenant I made with them.  Go and destroy them- to the last man, woman and child.  Feed me their blood and screams, then shatter their walls and build me an altar of their skulls.  Or do not, but be warned, either way brings blood and pain.
6- Do you wish to be like me?  If so, travel to the places you see in your dreams.  There will be trials and challenges there.  Pass them all, without delay or error.  Grow strong and powerful, fat on glory and stolen might.  Shirk not from what is necessary, for it all will be.  Then, in the end, return to me, heaped in honors and challenge me.  Strike me down at the end, and you will be one of US.  Or, if you do not wish this fate for yourself, stand there, and I will kill you.  It will painless, I promise you that. 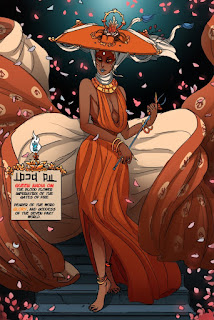 Update: I have decided to revise this class just a tiny bit.  Instead of the above being the only use for one of the Secret Names of God, a Prophet should instead be able to use it in a much more flexible way.  The methods suggested above are only the recommended uses of the Secret Name.
How this works: A Prophet wishes to use the Secret Name "DIAMOND" to enhance his body to make it stronger.  If the Referee feels this is possible, the Referee should set a DC and have the Prophet's player roll a d20.  For example, a DC for the above example could be 10, but a DC to create a wall of force could be 15.  But if the Prophet wants to do something thatthe Name doesn't seem to grant power over, the Referee can just say, "That fails because it is impossible."

To see what Secret Name your Deity decides to bestow upon you, roll below.  You receive your first at level 1, then another at level 4 and 8. 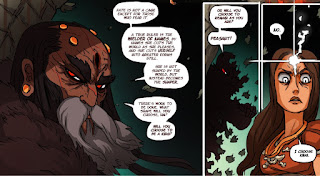