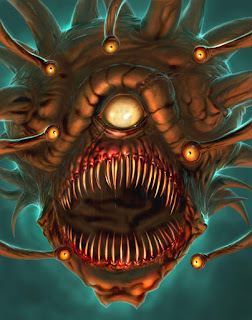 It always starts the same way.  A talented, yet tormented soul struggles at some endeavor.  An artist labors over a canvas or a block of marble, endlessly dissatisfied with their own work.  A dancer finds their own technique simply unacceptable, no matter how much they practice.  A writer cannot portray the true depth of his characters, no matter what words he gives them to say.  An executive is denied a spot on the board of directors for the third time.  A beautiful woman fails to satisfy her lover.  A brilliant warrior loses a match.  A murderer leaves behind a piece of evidence at the scene of the crime.  All of them proud, all of them wracked with deep shame.  It is these souls that summon the Beholder.

It is commonly believed that Pride and Shame was opposites.  This is not true.  Pride and Shame are brothers, one standing in the spotlight, the other selflessly supporting him from behind the scenes.  Shame fuels Pride, just as wood fuels fire.  For example, a man who is humble acknowledges his own faults and limitations.  Thus, if he fails at a task, he will not be hurt like the prideful man will.  A prideful man, on the other hand, will be torn up by his failure.

He believes himself to be better, capable of more than his failure, so when he fails to reach his own ideal, shame will overtake him.  This is when the Beholder arrives.

They are never summoned purposefully.  They come at their own strange whim, appearin when the proud soul is alone.  They speak in a hushed, hissing voice that only the proud soul can hear.  They insist that they are here to help, to aid the proud soul in achieving the perfection they claim.  The proud soul usually accepts.

The two then begin to work together, the proud soul laboring, while the Beholder floats around them, surveying them with its many eyes.  Beholders have incredible eyes, capable of seeing 360 degrees around them, as well as having sharp enough vision to read a book from across the street.  To them, all the small errors that would otherwise mar a work and rob it of perfection are plainly visible.  They help the proud soul correct these small errors, pointing them out and offering constructive criticism.  Beholders are always highly knowledgable about the craft of the proud soul, whether their craft be sculpture, painting, theatre, dance, fencing, negotiation, writing, sexual intercourse or death.  But as the Beholder criticizes and the proud soul works, they always find more flaws.  No matter how hard they work, they keep unearthing more flaws.  Yet the one thing they will never admit is that maybe, perhaps reaching perfection is impossible.

No, to them, failure is not an option.

So they begin resorting to other methods.

So the Beholder and the proud soul scheme together, constructing elaborate and dangerous plans to finally achieve the perfection they desire.  These plans are always foolish and violent and likely to hurt a great many people.  But that's fine. For such perfection, any sacrifice is justified. 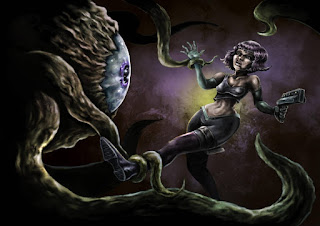 The Beholders and their Fell Powers

Eye Capture: A Beholder, if it has an empty eye, can attempt to swallow a person with its eye.  This person must be within 30'.  As a full action, the Beholder points its eye toward that person.  This person must now make a STR saving throw or be dragged toward the Beholder by a phantom hurricane.  This suction affects no one but the person affected.  If the saving throw is failed, the person is dragged toward the Beholder, covering 10' per round, meaning that the person has three rounds to escape the suction by some means.  If they reach the Beholder, they are trapped in its eyeball, and that Beholder gains a new Eye Ray.  All Beholders have a number of empty eyes equal to 10-the number of Eye Rays.  They can also release anyone trapped in their eyes as a free action, though they are loathe to do so.

Eye of Destruction: All Beholders have the power to fire a blast of overpowering white light from their central eye, the Disintegration Ray.  The Disintegration Ray fires from the Central Eye, and no other Rays can continue firing while it is used.  This Ray hits everything in a 60' cone, with a 60' range.  Anything in the cone takes 2d10 damage.  Anything reduced to zero HP by this is annihilated, leaving nothing but memories and bits of ash. 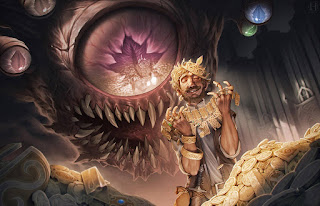 To Customize your Beholder, roll on the tables below.

How old is this Beholder?

What Eye Rays does this Beholder have? 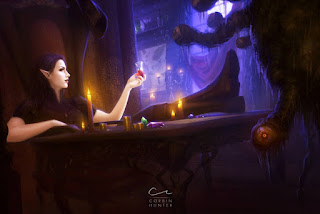 The Proud Soul and Plot Hooks

The Proud Soul is the one that the Beholder has attached itself to, the one who called it to our Universe.  Proud Souls can be strong or weak, mighty or frail.  They only have 2 thing in common.  Firstly, they are proud.  Secondly, they are just talented enough to think they can achieve perfection.  When a Beholder comes, it begins to assist the Proud Soul, becoming its partner in crime.  At first, the Beholder and the Proud Soul merely talk, but rapidly they begin to feed off each other, constructing more and more elaborate schemes.  The Proud Soul will usually be the inspiration for this wild scheme, with the Beholder lending its power to the Proud Soul, acting as a source of ideas and magical might.

However, eventually, the scheme usually fails, almost always because of the Proud Soul making some kind of mistake.  At this point, the Beholder turns to go, but not before it opens one of its eyes and attempts to imprison the Proud Soul within one of its eyestalks.  It then leaves our universe behind, until the next time it is summoned.


The table below can also function in reverse, for instance, if your players cut off one of the Beholder's eyestalks that is firing out one of its Eye Rays, whatever is trapped inside will be set free.  Simply roll below and have that creature suddenly burst out of the Beholder's severed eyestalk.

Who called the Beholder, and what do they want? 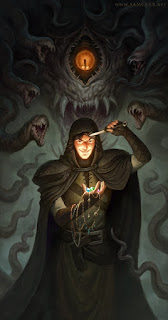