These are the Sovereign's Sacred Treasures, six treasures created for a long-dead King called Hashezzar,  the Overlord of Solar Radiance.  This man was a real, if obscure historical figure, though whatever setting you're in, he's been dead for a long time.  Further research will reveal that Hashezzar supposedly had six sacred treasures, each one incredibly valuable, and supposedly, possessing strange, mystical properties.  These sources are right.  Each the Sacred Treasures a powerful magical item.

These magical items are among the most dangerous tools that someone could acquire, right up there with a suitcase nuke and a vial of highly contagious, weaponized influenza.  The Sovereign's Sacred Treasures are the magical equivalent of raw plutonium, dangerous by themselves, but if combined properly (or improperly) they could unleash a catastrophic amount of death and destruction.

Stat Increase: All Sovereign Magic Item boost their associated Stat to 16, unless you had one that was already higher, in which case the Stat will instead be boosted to 18.

Sensing: As long as they are within the same universe, the owner of a Sovereign Magic item can sense the presence of the other items, unless they are outside this universe or besides a ludicrous amount of radiation shielding. 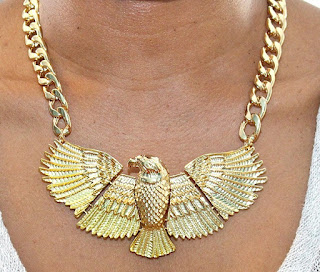 Appearance- A steel Aquila necklace, heavy and ornate, the eagle's feathers each tipped with a small gemstone, everything from a tiny ruby to a clear diamond to a moonstone and a pearl and everything in between.  It feels warm to the touch, and radiates magical power.

Power- Allows you to speak any language.  You may also give an order X times per day, where X is the number of the Sovereign's Sacred Treasures you possess, and all who hear it must save or obey, if they have less than or an equal number of HD when compared to the wearer's level.  Those with higher HD may simply pass.

Stat Increased- EGO (or INT, if you still use it).

Curse- Those who wear the Amulet of All-Speech who are not of royal blood, whether through birth, marriage or adoption will quickly suffer the Amulet's curse, and that is promotion.  The Amulet's wearer will quickly find that authority figures trust them and turn over power to them much easier.  They will suffer a meteoric rise, then usually fall just as quickly.  Those of royal blood do not suffer this curse. 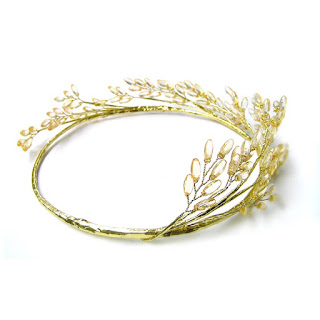 The Crown of Courage

Appearance- A circlet of silver and white gold wire, heavy with geodes and gemstones.  These gems seem to subtly glow when the crown is being worn.

Power- As an action, X/Day, the wearer may select any number of people that they can see.  Those people must then save, if they wish to.  Those who fail their save will then become either immune to fear for as long as they are within 100' of the wearer or able to see him, or they must immediately check morale or flee.  Even if they pass their morale check, they take 1d6 Fear (CHA for player characters) damage a round.  If the Amount of Fear damage they've taken equals or exceeds their morale (or total CHA score), they flee, no matter what.

The wielder may activate this ability X times per day, where X is the number of the Sovereign's Sacred Treasures that they hold.

Curse- The wearer becomes unable to know how much HP they have left.  They do not track their HP, the Referee should do it for them.  This curse does not apply if the wearer finds a courageous person and kills them, then eats their heart. 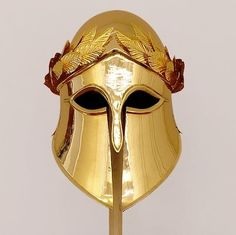 The Helm of Health

Appearance- A Corinthian helmet made of gilded steel and studded with pearls and moonstones around the eyes.  Has a sideways crest of royal purple and tassels of white that dangle down from it.  It smells of good soil and ripe wheat, and makes you remember a home that never was.  It radiates magical power.

Power- Allows you to instantly heal anyone up to full health if you touch them.  Can also banish diseases and flush poisons with a word.

Curse- The wearer may not heal use the Helm's power to heal themselves.  This curse does not apply if the wearer has cast aside their old name and identity, as well as renouncing all previous obligations to their name.  Referee's discretion on what "Casting aside" means. 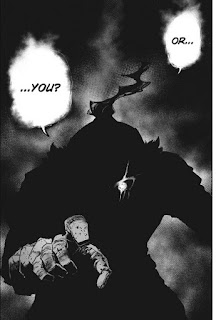 The Plate of Protection

Appearance- A suit of white plate armor straight from the High Middle Ages.  Warm to the touch and fantastically detailed with all sorts of symbols, both familiar and alien.  Radiates magical power.

Power: As an action, the wearer can make him or herself invincible for X rounds.  During this time they cannot be hurt by anything.  Bullets bounce off them, fire tickles and poison gas tastes as sweet as fresh spring air.  This invulnerability only lasts for X rounds, after which the Plate of Protection is only a strong suit of armor, and the ability cannot be used until the next day/after the next long rest.

The number of rounds this ability can activate for, X, is equal to the number of the Sovereign's Sacred Treasures the wearer possesses.

Curse- The Plate of Protection fuses to anyone who wears it.  It is effortlessly comfortable, weighing less than air and filling the wearer with power.  But each day they wear it without taking it off for an equal amount of time that they have worn it, they take 1d4 WIS damage.  As this damage accumulates, the wearer becomes more and more paranoid of the dangers they might face.  If this WIS damage ever equals or exceeds the wearer's WIS score, then the wearer will refuse to take the plate off.  At this point, the plate fuses to their body, and it cannot be taken off without killing them.  They treat the plate as their own body, and the plate responds, bleeding when cut and moving as they breathe.  It loses some of its metallic sheen and begins to resemble bone.  This curse does not apply if the wearer captures one of his or her enemies and convinces them to join the wearer of their own free will.  For this choice, the arm-twisting and rough treatment is permitted, but if the Choice is made while the enemy is under the effects of sorcery, such as Charm Person, for instance, it does not count.

The Sword of the Satan

Appearance- A broken hilt with a gilded, hand-carved handle of dense wood, wrapped in sharkskin.

Power- As a full action, a phantom blade of pure spirit will emerge from the hilt.  This sword can cut through anything, and hurt anything.  It does not do damage by rolling dice, but instead it deals damage equal to the wielder's CHA score + his or her STR modifier.

Curse- Every time the Sword is used to make a successful attack, it reduces the wielder's CHA by 1.  These CHA points will naturally restore themselves at a point of 1 a week, or 1d6 if the wielder murders someone and claims their soul.  This curse does not apply if the wielder has betrayed and murdered a member of their family or a blood-brother.

The Ring of Resurrection

Appearance- A ring of gold, with an inscription on the inside.  "Be raised Imperishable, oh Son of the Morning."

Power- As long as the wearer is wearing this ring, they cannot die.  They will still be damaged, but their soul will leave their body.

Curse- Every time the wearer would die, someone nearby suffers their fate.  For example, if they were shot and would have been killed by the bullet, a stray bullet randomly blows a hole in someone's head.  No save.  This curse does not apply if the wearer sacrifices a child in a dark ritual, under the full moon.