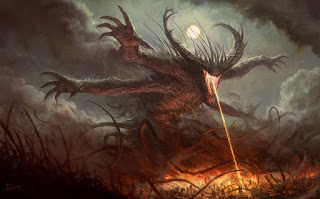 Xeno is an umbrella term invented by the Company.  This is meant to represent any intelligent, humanoid species that lives here on Earth with us.  And while as distant from humans as they are from each other, Xenos share certain traits.  They are all mortal- they can be killed, they breathe, they shit, they breed and eat and get married and have conversations and want normal things, like food, sex and safety.

This is not an entry about them.

A Demon is any creature from outside of our universe, a being of immense power and unfathomable intellect, possessed by strange desires and odd quirks.  Demons are all powerful, intelligent, and inscrutable.  They are known for their malicious acts, generous gifts, and seeming insanity.  They come in all shapes, sizes and colors, and their are very few similarities between them.  As with Xeno, Demon is an umbrella term, grouping together creatures that only really share a destination, as they all come from different places.

One of these varieties of Demon that is most common are the Gentle Beasts.

Gentle Beasts all have three characteristics in common.

First, all Gentle Beasts manipulate reality in small, subtle ways.  These serve as signs to herald their arrival.

Secondly, all Gentle Beasts have strong, innate magical abilities that they use to manipulate and deceive, and when cornered, to fight.

Thirdly, all Gentle Beasts have an Aim, which they pursue with monomaniacal intensity. 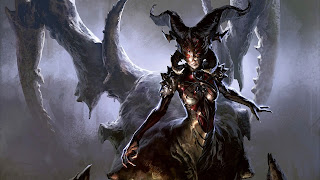 Shapeshifter: The Gentle Beast can shapeshift into anything it can imagine, but its stats will stay the same, no matter what it becomes.

Possession: The Gentle Beast can possess someone.  To do this, the Demon must make a mental attack against a creature's AC.  On a hit, this does 1d6 Cha damage.  If the Cha damage taken equals or exceeds a creature's Charisma score, the Demon transforms itself into energy and possesses them.  While someone is possessed, they take damage before the Demon does.

If the person the Gentle Beast is attacking does not possess a Cha score, instead calculate their Charisma score equal to their Morale+1 per class level they have.

Finally, a Gentle Beast can automatically possess someone who does not resist.

Eldritch: A Gentle Beast can only be killed by magic.  Whenever non-magical damage would bring it below 1 HP, this creature is instead dazed for 1 round.  They cannot be stunned more than once every 2 rounds.

False Death: If the Gentle Beast is reduced to zero HP by a non-magical source, it can either survive as per 'Eldritch' or can allow its body to be destroyed.  If it does the latter it still lives, but is ejected from the universe for some time, and will probably need the help of others to enter it.

Tactics:
- Hide and ambush you
- Possess your friend and use them as a meatcar
- Shapeshift into things you wouldn't want to attack

*See "How strong is it?" Table

To customize/generate a Gentle Beast, roll on the following Tables:

What sign heralds the Gentle Beasts arrival?
1d6
1- Sight.  Those nearby start to hallucinate.  Silverware begins dancing, houses twist and melt, etc.
2- Sound.  A persistent noise starts to sound.  It can be a repeating mantra, or a single flat note repeated ad nauseum.
3- Smell.  A foul or pungent aroma fills the air, despite having no particular smell.
4- Taste.  All nearby suddenly taste something in particular.
5- Touch.  All nearby feel the sudden breath of cold wind on their necks, someone tracing things onto their backs, etc/
6- Time.  The flow of time seems altered by the Gentle Beast's arrival.  You may spend a few moments waiting for something, only to find out that an hour passed when you weren't looking.

Does this Gentle Beast have any other powers?
1d20
1-8: No, it does not.
9- Can grant wishes, but only if you say "I wish..." in the Demon's presence.  Additionally, unless a wish is made by a genuinely good person or for a selfless reason, the Demon will engineer the wish to backfire.  The Demon cannot alter reality or change the fate of the world, but it could make you a celebrity overnight or wealthier than King Tut.
10- Can steal the souls of sinners, but only if someone has committed murder.
11- Can eat people, but only if someone asks them to.  Ex: "I hate Mrs. White, I wish she was dead!"
12- Can steal the name of anything named in its presence.
13- Can bestow intelligence and sapience onto anything it chooses too- from babies to animals to inanimate objects.
14- Can hide inside mirrors.
15- Can rewind time, but certain people will be able to remember it (include the party in this group).
16- Can turn itself invisible, but leaves footprints wherever it goes.
17- Can leap out of fires, but causes power outages whenever it does this.
18- Can make people despair and kill themselves, but loses power if confronted by genuine hope.
19- Can see out of the eyes of other living entities, but is blind without them.
20- Cannot be hurt by weapons, but can be hurt by things that are not weapons.


Role-playing as a Gentle Beast

Gentle Beast are not all evil, but they are all aggressively amoral and have a laser-focus on whatever their current aim is.  They will pursue it at the expense of all other things, as they know its only a matter of time before someone finds them and tries to send them back.  You can distract a Gentle Beast with something very interesting, but they can only be delayed, and will not stop in their current mission, unless you could offer them something even greater (and this is rather unlikely).

Another thing to note is that while Gentle Beasts are incredibly dangerous, they usually try to pretend to be something benign.  But this is an in-genuine disguise, the Gentle Beast isn't interested in an air-tight deception, just in having enough plausible deniability that they can play dead after you shoot at them.  However, one thing to note is that while a Gentle Beast can suppress the signs that it causes as long as its not using any of its abilities, so as long as its not trying to shapeshift or possess anyone, everything will seem normal.  But as I said earlier, the disguises the Gentle Beast wears are usually unconvincing.  The players should suspect something is up when a Gentle Beast comes to talk to them, but they should not know what it is- so when the Gentle Beast suddenly comes back to life and transforms into a six legged zebra with bat wings and fire-breath, they should still be shocked.

What is this Gentle Beast's aim?
1d10
1- To bring misery to a specific person.  Why? 1d4 (1= Because their ancestor harmed the Gentle Beast; 2= Because they remind the Gentle Beast of an old enemy; 3= Because the Gentle Beast thinks they deserve it; 4= Because the Gentle Beast just feels like it).
2- For as many people as possible to kill themselves in its name.
3- To instigate or escalate a conflict.
4- To engage in as much worldly pleasure as possible.  Sex, drugs and rock 'n' roll, but not necessarily in that order.  Will likely throw a party that will be the biggest shindig in the history of the Tri-State Area, with blackjack, hookers, and mountains of cocaine and other illict substances.
5- To stir up controversy.
6- To go on a crime spree.
7- To "Accidentally" lead some suckers into a dangerous situation.
8- To finally initiate the last stage of a plot begun years/decades/centuries/millennia/thousands of years/millions of years.
9- To make one specific person do something completely arbitrary, for no real reason other then because the Gentle Beast wants them to.
10- To recover a certain item the Gentle Beast lost a long time ago in this world.

Where does this Gentle Beast claim to come from?
1d6
1- Hell.
2- An Earth from an alternate universe.
3- Heaven.  The Demon usually takes the form of an Angel or Angelic figure.
4- A far-flung, distant star.  The Demon also claims to be an Alien.  It will deny it has any powers, and claim these are just alien technologies.
5- The future.  The Demon will pretend not to have any powers, and will be very angry if you force it to reveal its true nature.
6- Another universe.

Finally, all Gentle Beasts know things.  Roll on the table on the  bottom of this post to determine how truthful what the Gentle Beast is saying is. 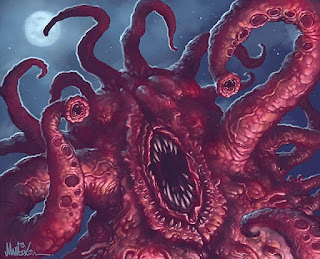