For the record, I borrowed this concept from here. 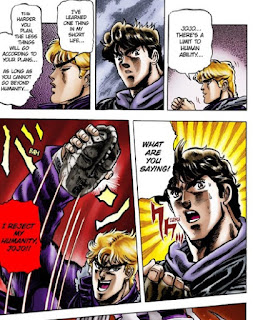 "Sweat, dripping down your chest
Thinking about your tattooed knuckles on my thighbone
Those aren't tribal, they were for a test
For something taken out on a loan"

Most people when told a book is evil, or an artifact is cursed, or a place is evil, reject it and try and either destroy it, or run as far away as possible.  They have the good sense to know that such things are best left untouched, and wisely steer clear.  You are clearly not one of those people, as when someone offered you power in exchange for your soul, you signed before they got halfway through the elevator pitch.

Problems are people who have attempted to take cosmic power when they were offered it.  They sold their soul, let the Vampire bite them, or drank liquid magic, in the hopes that they would become a God, or something of that nature.  However, the whole process was botched.  You got a bad deal, or you didn't understand the spell you cast.  So you gained a small amount of power, in exchange for a litany of side effects.

The goal of every Problem is to develop their abilities, to rid themselves of human weakness and transcend their humanity.  But this is a long and difficult road to walk.  Additionally, Problems must take pains not to lose control, as with one substantial fuck-up the beast within could take over, and then everyone is in trouble. 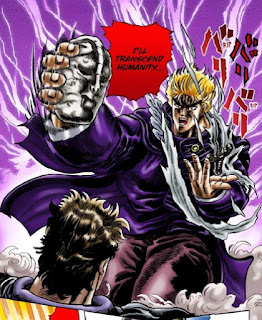 The Problem is a class based around its sub-class or its archetype.  It's essentially a skinny version of the Wizard, with specific powers based on what kind of Monster the Problem is slowly turning into.  The difference between the Problem's spellcasting and the Wizard's is this.  Firstly, for the Problem all its spells are always prepared.  Secondly, their is no minimum threshold that must be rolled on the Power Dice.  However, the Power Dice do still burn out on a 5 or 6, and only come back after a long rest (8 hours).  This is the core of the Problem class, their magical abilities are utterly unique, and they will likely be the only spellcasting that the players have access to.

For its role in the party, the Problem is meant to do two things.  First, it grows fast but plateaus quickly, so in an early game it can function as a decent damage dealer and combatant, though it will be replaced by Shepherds, Alices and Everymen later on.  But past that, the Problem can provide unique magical powers that no one, not even the Alice can provide.  For while Alices do have magical powers as well, they only have one, unlike the Problem.  But the second way the Problem contributes is as a ticking time bomb for the Referee to lovingly arm and wait for the blast.  And this is a good way for the Referee to think of them, because the Problems are abominations.  They are incomplete, the darkness they newly infused into themselves struggling against their human vitality.  They are powerful beings, but flawed, dangerous in the same way a gun prone to misfiring is.

First Taste: Roll 1d6 on the Magical Abilities table.  You can use that one as often as you like, as long as you have Power Dice.  Power Dice are d6s that burn out on a five or six, and fizzle if the sum of the roll is 1.  They return to you after an eight hour rest.  Additionally, each time you gain a Problem level, you may roll again on your Power List, rerolling duplicates.

Starting Quirk: You gain a special feature based on what type of dark magic you defiled yourself with.

Bloodthirst: As a full action, you can demonstrate your status as partially inhuman.  All who can see you must save.  They may receive a penalty to this save if you demonstrate your unholy power, are dripping blood, or something else is off about you.  For example, if someone's fairly certain you killed and ate their dog when no one was looking (-1).  If you just tore it apart with your bare hands in front of them, (-4).  Those who fail their save take +1 damage from you until they get a chance to calm down and process what just happened.  They also will flee from you, though whether this amounts to quietly excusing themselves and walking quickly back to their cars or fleeing in terror depends on what you do.  Those who do not think you could actually hurt them (such as an Outsider, Dragon, or Magister) automatically pass their save.

Malign Form: You develop natural armor appropriate to your infection and your body may go through other changes as a result.  See your Monster Profile for more details.

Emblem Power: You learn the Emblem power detailed in your Monster Profile.  If you do not wish to gain this power, however, you may roll again on your Power List, rerolling duplicates and results you have gotten before.

Inhuman Soul: Your mind is altered to fit your slowly-chaning body.  See your Monster Profile for more details.

Sight Beyond Sight: As True-sight/Wizard Vision.  Lets you see things as they truly are.  You can see magic, strong emotional feelings, and the like.  When you use it, you must make a save or be dazzled by the amount of activity around.  If you fail your save, you are about as reliable as someone on LSD, and may receive a penalty to focus and noticing stuff.  Additionally, if you see something particularly hideous with your Sight, then you must save or have a panic attack/spontaneous mental breakdown.

I reject my Humanity!: You lose all remaining human qualities.  See your Monster Profile for more details.  You also can no longer trigger Chaos or Corruption, or suffer DOOMs.

And here, just for completeness, is a Monster Profile for playing as a Deadite, or as Gary vs the Monsters calls them- Necroids. 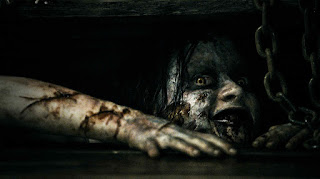 Natural Weapons- You develop claws.  They do 1d6+STR damage.

Malign Form- Your flesh becomes cold and dead.  You don't feel pain, but you can feel positive things.

Inhuman Soul: Anyone who sees you take a significant injury and not be slowed by it must save vs fear.

I reject my Humanity: You become fully undead.  No need to sleep, eat, drink or breathe.  You also start taking damage from sunlight.  1d10 damage a round.  Finally, if you are killed because of magic or a magic weapon, then you are permanently killed, and cannot return to life.

Magical Powers:  Roll on the table below to see what you get.  If you get a result again, you may reroll.  Each power is a spell you always have prepared, and can cast implicitly, as long as you have Power dice.

Emblem Power(s): Choose one, Graft, Me and My Shadow or Spider Climb.

If someone near you has lost a limb or suffered some sort of other catastrophic injury, you can use this spell to transplant one living limb, or one taken from a fresh corpse (less than 1 hour old) and graft it onto the person.  This immediately fixes the injury that the transplantation was expected to address, and restores +[dice] HP.  Then the person must make a save with a bonus equal to [dice].  On a success, the spell works and the organ is accepted as part of the body.  On a failure, the body part is rejected.

For the duration, [dice] creatures can stick to and climb walls.


Me and My Shadow


Chaos Table: When you roll doubles on your Power Dice.  Also lose 1d3 Humanity Points.  Power still works.
1d6
1- You are filled with the desire to eat some long pig.  Until you get some, you can regain no HP from eating.
2- For the next 1d6 hours, you cannot say anything nice to anyone.  Mocking, insults, and degrading people is fine.  But not flattery or compliments.
3- You suddenly are filled with the desire to mutilate yourself.  Unless someone stops you, you will attack yourself with your claws, or if you don't have claws yet, the nearest weapon for normal damage.
4- You have the sudden desire to give one of your friends a scar.  You are not compelled to do this, but you lose 1 HP per day you do cut up one of your friends.
5- For the next 1d20 hours, you will recklessly antagonize any enemies you come across.  If you have your Emblem power, you will use that to personalize your insults and threats.
6- You develop a fear of one of the Necroid's abiding fears.  Roll 1d6 to find out what it is, rerolling duplicates.
1d6
1- Symbols of Faith, Churches, and Priests.
2- Chainsaws
3- Open Fires
4- One-armed Men
5- Open graves
6- Holy Water

Corruption Table: When you roll triples on your Power Dice.  Lose 1d4 Humanity Points.  Power automatically fails.
1d4
1- The next time you see someone who isn't a close ally, you fly into a rage and try and kill them.
2- A voice calls to you from out of the darkness.  It will command you to do something hideous.  Refuse at your peril.
3- All your friends suddenly forget who you are, and think a monster is in their midst.  For 1d6 rounds, no one will believe what you say.
4- For the next 1d6 hours, you can only take actions that cause harm, either directly or indirectly.  You can help no one.  If you try to, you will end up doing something horrible against your will.

DOOMs:
First Doom: You are shunted out of your body, and your body is stolen by an older Necroid for one day.  This Necroid can cast 1d6 Necroid powers, and is HD 8+1d6
Second Doom: As above, but for a week.
Final Doom: Your soul is devoured, and the older Necroid takes your body for themselves permanently.

Cure: Find the older Necroid and make sure they stay dead.