<edit>  If this looks different from the first time you read it, that's because it is.  </edit>

Your sense of hearing is the second most important of the five senses.  While sight is your primary means of interacting with the world, hearing is the second.  Without it, someone sneaking up behind you would be unnoticed until they put a hand on your shoulder (or stuck a knife in your back).  So a monster that affects that is something that's been niggling at my brain for a while. 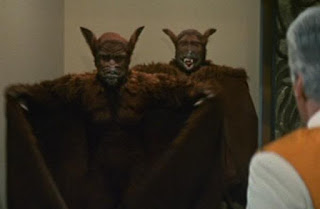 Though they are more commonly called Mimes by the general populace, they are no laughing matter.  Mimes stand between 5' 10" and just under seven feet tall, with hunched frames and ape-like faces.  They are covered in coarse black fur and have long, pointed ears like a hound.  From the back, they look like a giant bat.  They lack wings, but do possess fearsome claws for cutting and more importantly, climbing.  They can use these claws for fighting, but most of them use weapons for the same reason humans don't just punch each other to death.

But a Mime's greatest ability is not their claws or strength, or ability to conceal themselves in the dark.  It is the ability to eat sound.  Mime's catch sounds from the air and swallow them, making the object that produced the sound unable to do so for 12 hours.  If you throw a dice and a Mime eats the sound the dice made clattering on the wood, then you call roll the dice for hours and it will never make a sound.  The same goes for any object.
Living beings can usually produce two sounds, one from their body (clapping, breathing, footsteps) and their voice.  If a Mime eats the sound of your voice, you can't speak for 12 hours.  This is one of the reasons why Adventurers on the West Coast tend to inordinately know sign language.

Historically, the Mimes come from a distant netherworld beneath the surface of the earth, from a sunless land of caves and caverns.  Mime culture was tribal and primitive, dominated by raiding, migration, and constant petty wars.  Some Mime tribal groups accompanied vast giants that tunneled through the Earth, widening tunnels to fit their massive bulk into.  In the darkness these giants lived in utter isolation with the exception of their silent attendants and the tribes lived around and on them, devouring the noises the Giant made.  It was a symbiotic relationship, allowing the giant to sneak in absolute silence while tunneling underground.  Down here they signed songs to each other, and knotted hair into a tactile web of their histories.  They called themselves the Vibroni, translated as "The Hunters of Screams".  When two of these giants would meet, if it was not for purposes of mating, they would fight.  Their Mime companions would fight as well, a second shadow conflict in the shadows of their masters.  The losing Giant would be killed and eaten by the winner, and the Mime tribe that survived would feast on the rumbling of innards and the drip, drip, drip of blood onto the cave floor.  The losing tribe would usually be massacred, and only the most youthful of the females would be taken, the rest having their voices devoured before being sliced apart and fed to the Giant.

But eventually, some catastrophe shattered this peaceful existence, literally, and sunlight poured down through the open roofs.  And Humanity gazed in wonder at the primitive beings beneath them, and the Mimes gazed back.

You can use these guys for almost anything, whether that would be as a race of feral humanoids to replace Orcs in a more spooky setting, or as a primitive under-class in a multi-racial empire, or as even as Player characters.  If you already allow Half-Elf bards, I don't see why you couldn't.  I think the first role is most appropriate.  Imagine one of below, but bigger, wearing bronze mail and carrying a curved sword. 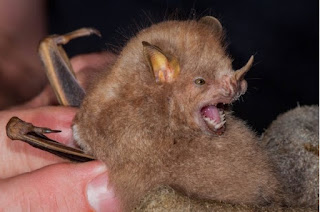 They jump out of the darkness, baring their teeth in a silent grin as they approach the watchman.  When the lookout called to alert the others, they would eat the sound of his warning and butcher him while he screamed from a silent throat.

Sound Eater: A Tongue-eater can catch and devour sounds.  An object that has its sound eaten cannot make noise for 12 hours.  Assume each Tongue-eater can eat two sounds per 12 hour period.

Do you want to play one?
Mime

- Can eat sounds.  You can eat a number of sounds equal to your Con modifier +1 per day.  An object that has the sound it produces eaten cannot make sound until sunrise or sunset (whatever comes first).  A person with their voice eaten cannot talk for the same length of time.  Mages can still cast spells, but only the ones of their school.

- If you have Cha 13+, your claws enable you to climb any surface that is physically climbable.
Where a human would need crampons and a climbing axe, you just need your bare hands.

Also, they can talk, but they usually don't.  They usually communicate through sign language or writing.  Speaking to them is a waste of good sound, and thus most tribes will have a permanent Speaker position, who is basically the one person allowed to waste sound.